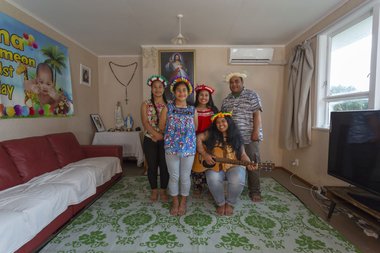 The sequence of identificatory anthems is not spatially separated, and though linked, the musical forms, conceptual sentiments, historical contexts, instruments and personnel numbers are varied. While it is up online for only a week, it is easier to absorb than previously. Sitting at home in your own chair is infinitely better than standing on a cold concrete floor in a draughty gallery in front of a large projection. Especially with pause/fast forward/reverse (mouse) controls at your fingertips.

The second week-long online Te Tuhi presentation that Andrew Kennedy has organised (the first was Sorawit Songsataya‘s fetishistic video from an earlier sculptural Te Tuhi installation: a spatial context that I missed), this reformats the Olivia Webb show that she exhibited in Gallery One, St Paul St Gallery, last year, as a doctorate submission, and which was re-presented in The Dowse.

The AUT display—held at the same time as Lance Pearce‘s exhibition in Gallery Two—involved multiple screenings on walls, with the five family musical performances (about community identities in Aotearoa-with self-penned lyrics and tunes) being activated in sequence, not simultaneously. This new Te Tuhi ‘post-lockdown’ show is very different bodily, its efficacy relying on your (portable or otherwise) computer screen.

Again, there is a sequence of identificatory anthems. They are not spatially separated, and though linked, the musical forms, conceptual sentiments, historical contexts, instruments and personnel numbers are varied—from families linked to ancestors in Kiribati, Samoa, the Philippines, Zambia, England, and the Netherlands. While it is up online for only a week, it is easier to absorb than previously. Sitting at home in your own chair is infinitely better than standing on a cold concrete floor in a draughty gallery in front of a large projection. Especially with pause/fast forward/reverse (mouse) controls at your fingertips.

The Anthem project is quite quirky. I like the fact that Webb has included the families (in their own sitting rooms) getting themselves organised for the camera and mike; she hasn’t edited out too much of the dead time before and after each song’s recital, or sounds captured off-camera. The singers sometimes arrive one at a time and take a wee while to set up and get comfy. Some individuals are late, others early. Occasionally little unanticipated accidents happen that she’s kept in.

The five sets of lyrics and aural structures vary greatly, and are an exciting mix. With their beautiful close harmonies, the Tiibin (Kiribati) family focus lyrically on climate change and the disappearing of their original Pacific home due to the rising sea. In contrast, without music, a young Zambian man (representing the Chembo family) confidently recites an autobiographical poem that indicates regret for past actions, a love for his ‘brothers’ and ‘sisters’, and a close scrutinising of the new flag he now pledges loyalty to. With a more traditional stance (and less of a demurral) and recognising the value of land and sea, and the power of ancestral heritage, the Faulalo/Bull (Samoan-Pākeha) group look forward to the future as a united team. The Samson-Godinez (Filipino) family have composed a beautifully poetic love letter to Aotearoa with wonderfully evocative imagery about the starry sky, while the Vissers Webb (Dutch-Pākeha) ensemble cleverly combines very contemporary jazz chordal progressions with early Western choral ornamentation, as well as aleatory Cagean lyrics with ecclesiastical Latin.

Some things though are a little strange. In the online documents providing the lyrics written by each family, and Webb’s observant analysis of them, the names of individual family members are deliberately not given. This I think is a mistake, because while the show is about family solidarity—and in each case, individuals contributing to a communal outcome—there is no need to obliterate their separate selves either.

I’m saying this because I believe community values can be over-rated and that solo individuals often provide a valuable driving energy (at personal cost) to get certain collective goals achieved. Usually some members of a group are more committed to gaining collective goals than others, and nudge the less enthusiastic participants along. (You could argue there is something fascistic and corporate about denying identification of group members so that only the ‘brand’ remains, especially when individual musical skills are clearly on display.)

Anthems of Belonging is a richly layered project from Webb, but it is not as innovative as her even more intellectually engrossing earlier undertakings. While it has plenty of aural and conceptual surprises its overall harmonious community ethos makes it a bit predictable. It has a comfortably healing altruism that can grate, and is typical of art that (understandably but over-reductively) reacts to our disturbingly confrontational and fractious time—from the viewpoint of a particular generation.