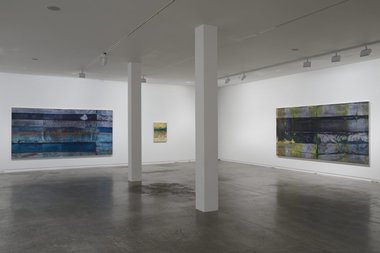 Downstairs in the large Two Rooms gallery Matt Arbuckle presents eight abstractions that oddly have vague similarities with the layered (but recognisably) imaged (via photography) paintings of Sigmar Polke—through their use of a watery spatial depth and ‘suspended’ motifs. These works are looked through as much as at. The dominant background structures (when present) serve as backdrops for isolated clusters of shapes and marks that hover and are not locked in with other drier forms of paint application.
Not integrated though busy, the two depths exploit thin acrylic paint and greasy oil stick: on and behind the picture plane.

By working with (initially) unstretched knitted polyester fabric that can be easily folded, creased, bundled or pleated, Arbuckle references the French / Hungarian artist Simon Hantaï (an influence on the French ‘anti-stretcher’ Supports/Surfaces  Marxist collective of the late-sixties) and the Japanese dyeing technique of shibori. The blotchy washes and tremulous shape-edges, when mixed with the dye resist process, sporadically create a stencilling effect that looks like photographic negatives.

However unlike Simon Hantaï’s huge projects, these works are not holistic or pattern dominated. They are a strange synthesis of Helen Frankenthaler and (in South Canterbury) the early works of Rosemary Campbell as—with their faint (oft linear) painting traces—they seem to constantly allude to abstracted nature.

In the spacious Two Rooms environs, Arbuckle’s large horizontal works have considerable impact, blending brutal muscularity with a sensitive nervousness. With their diffuse pigment washes, they are constructed to be examined close up, yet from a distance these paintings look vaguely geological with bands of traversing strata—even architonic. These are the best works. They have a dramatic power from their contrasting elements and referencing of landscape; considerable grunt. In comparison the other smaller, more ‘watery’ paintings seem a bit anaemic. Posssibly even twee.

Although in her text the writer of the accompanying Two Rooms’ exhibition essay, Laura Couttie, refers to Arbuckle’s studio process as deconstructing and reassembling painting, to me they are quite conservative in spite of their unusual method. ‘Deconstructing’ painting (even if a temporary stage), like the notion of ‘anti-art’, is I think today a nonsensical concept, as the work is thoroughly traditional through its easy absorption into an overarching historical (post-Cagian) tradition, and in its preoccupation with pleasure—for the maker (perpetuating an unusual ‘avant-garde’ process) as much as the viewer as much as the envisaged purchasing owner.

Nevertheless this is an interesting show to look at if you like thinking about textile supports for painterly substances and how they can be manipulated, or those same treatments as similes for say methods of writing with pages of found text: like collage, Burroughsian cut-ups or fold-overs. Processes that create aleatory results that continue to surprise.