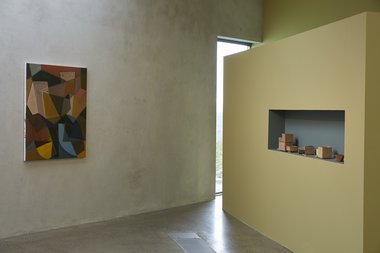 Taylor's two spatial types were scattered amongst the two galleries, either playing off against the internal sculptural space of Thom's crockery, oven and fridge, and Cochran's wonderfully colourful hand bags; or the nuanced, glazed, outer surfaces of Thom's claywork, or the textures of Cochran's intricate needlework.

Although she is currently exhibiting with Michael Lett at the moment (with fellow painter Diena Georgetti), out at Te Uru in Titirangi-on Level Six—Imogen Taylor recently had two rooms with her works installed alongside Vita Cochran‘s textiles and Isobel Thom’s ceramics. Expertly put together by Ioana Gordon-Smith (the Te Uru curator) with Taylor, the Te Uru presentation allows Taylor’s canvases to interact with ‘craft’ sensibilities—much as Kathy Barry did with Thom (painter and ceramicist) three years earlier in the same space.

In Gallery Five by the outer stairs, Taylor presented her acrylic paintings with Vita Cochran‘s embroidery, needlepoint and delicate decorative geometry, and in Gallery Four, with Isobel Thom’s functional ceramics that she has made for her own carefully planned, functional house. The collaborative exhibition came as part of Taylor’s recent McCahon House residency.

With Taylor’s characteristic mock-cubist imagery on surfaces such as canvas, linen, board or hessian, the emphasis was not on examining various objects from multiple perspectives; rather it was exploring illusory space itself: its depth and interruptive rhythms. Some paintings were angular with their compositional vectors, and deep in their boxlike receding forms; others were comparatively shallow, like trays, dominated by narrow vertical strips close to the picture plane. Many were playful with their undulating, organic curves that suggested living creatures lurking within the architectural structures, and so were reminiscent of surrealism. A few emphasised landscapes and bush forms, delighting in McCahonesque geometry.

Both spatial types were scattered amongst the two galleries, either playing off against the internal sculptural space of Thom’s crockery, oven and fridge, and Cochran’s wonderfully colourful handbags; or the nuanced, glazed, outer surfaces of Thom’s claywork, or the textures of Cochran’s intricate needlework. The design of the presentation, with shelves recessed rectangularly inside the walls, accentuated the exploration of illusory planes articulated in Taylor’s imagery, and referenced in Thom’s freestanding sculpture and Cochran’s subtle wall reliefs.

This aspect was further enhanced by unobtrusive pale khaki walls and internal grey planar recessions that subtly showcased the conceptual unity of the installation. Furthermore, the internal design vectors and outer shapes of Taylor’s paintings also referenced the floorplans of the galleries, one being rectangular with conventionally right-angled corners, the other stressing acute and obtuse angles.

Looking at the distribution—its breakdown—there were nine Taylor paintings, ten Thom ceramics and twelve Cochran textiles. The three artists’ works conversed with each other, with similarities of shape, form and colour ducking, diving and weaving in and out the three practices. It was nice to see such points of similarity between these individuals who basically work with different types of tactility in their choice of materials—although Taylor, with her range of supports, had more varied surfaces.

This was easily the best (and most focussed) show I’ve seen of Taylor‘s work so far, and an excellent introduction to the practice of Vita Cochran. (Her handbags here are extraordinary.) Thom’s work is quite well known now, the result of a successful (and unusual) transition from painter to ceramicist and maker of efficacious sculpture.