Dashper at Marfa at Lett 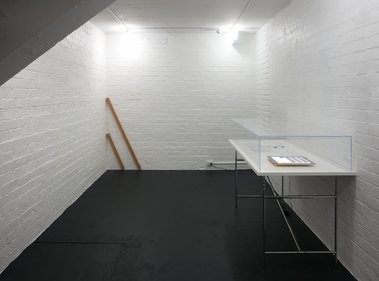 They are funny because leaning factory-made stretcher bars are complex functional forms very different from angled, glowing fluorescent tubes. Dashper relies on direct or reflected light on their own or adjacent surfaces, not on light radiating from within. Flavin relies on both.

The two exhibitions currently running at Michael Lett’s, by Julian Dashper and Kate Newby, both reference these artists’ residencies at Marfa, the west Texan town made legendary by the activities of resident sculptor/painter/installation artist/critic Donald Judd (1928-1994). Dashper’s stay was in 2001 (his posthumous Lett show is down in the basement), Newby’s was in January 2018 (her Lett show is on the ground floor and ascending staircase), and both on occasion reference Judd’s friend, the light artist Dan Flavin (1933-1996) who has six barracks of work in the Chinati complex that Judd set up in 1979.

Flavin’s work with fluorescent tubes is a very important reference point in the Dashper exhibition. The two main works installed in the gallery spaces (now renovated with extended walls and charcoal painted floor) allude to certain works of Flavin’s where fluorescent tubes were leant against walls or into corners. Dashper uses mitred wooden stretcher bars instead, being funny but also serious. Each cedar bar suggests the edge of an invisible plane that diagonally extends spatially out into the centre of the room (or along the wall and through the ceiling)—an unseeable painting that you walk around and through. It could extend into infinity.

As a digression—I wonder if Dashper was influenced by Robert Filliou, the influential French Fluxus artist eloquently discussed by Martin Patrick in his remarkable book, Across the Art/Life Divide. While I think Dashper’s approach to artist professionalism was almost the opposite of Filliou’s in terms of aggressiveness, both were interested in teaching and learning as elements of practice, and Dashper’s interest in the imagination could be very Fluxuslike.

The kitset bars are presented in pairs or triples and are sequential in size: perfect for ABC (series) art. Again about potential and imagined paintings—even stretcher-bar shaped fluorescent tubes glowing in pastel hues—or if you wish, simple but intriguing, decontextualised, functionless wooden objects as visually satisfying objects.

They are funny because leaning factory-made stretcher bars are complex functional forms very different from angled, glowing fluorescent tubes. Dashper relies on direct or reflected light on their own or adjacent surfaces, not on light radiating from within. Flavin relies on both. Of course stretchers normally support canvas on which pigment is applied, and pigment is hugely different from coloured light, so there is metaphor involved—even though paint can easily create the illusion of coloured light on a surface, experientially confusing the two.

The other Dashper works are in vitrines or in the back corner basement gallery. A white canvasboard diagonally cut into a right-angled triangle echoes the design he did for the cover of his handout at Marfa, seen alongside a slide set documenting the exhibition. That handout: 100 thoughts as an artist in residence at the Chinati Foundation, Marfa, Texas is in the pink Dashper hardcover publication, This is Not Writing, pp 86-91). In the back gallery in another vitrine are two small yellow photography boxes, containing stacked sets of drawings and a sketchbook by both the artist, Marie Shannon, Julian’s partner, and Leo, her and Julian’s son—who visited Julian in Marfa, and drew certain works in the Judd collection.