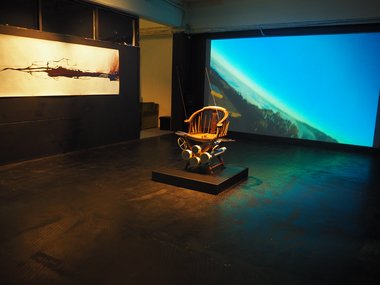 What is obvious about Dadson is that his excitement with discovering and making new sounds seems to increase as he gets older. Besides not faltering and never diminishing, that pleasure not only refuses to stay constant but actually accelerates.

Phil Dadson
Shiver Me Timbres: Solos and Collaborations with a Multi-Voiced Instrument

This Audio Foundation installation (and closing concert) features the musician and composer Phil Dadson, the 2016 recipient of the Fulbright-Wallace Arts Trust Award, who spent three months at the Headlands Center of the Arts in Sausalito, close to San Francisco. The Auckland presentation uses three rooms to display some of Dadson’s scroll paintings—these feature horizontal dribbly lines of paint that seem manipulated by the elements, with written or stencilled words—a musical chair (a custom-made instrument that he calls a ‘tonethrone’), the layout of a publication, and three videos of improvised concerts (one projected, two on plasma screens) in Californian spaces where Dadson and three musical colleagues were performing.

The tonethrone is an adapted rocking chair on a platform bristling with projecting amplified metal rods that can be rubbed, tapped or bowed. It is a typical Dadson instrument that keeps good company with his massive array of other invented (or discovered) objects that can be hit, rattled or plucked for resonating or crisply sharp sounds. In his hands these give a vivid sense of the present or nowness of auditory sensation, an immediacy that often refuses anticipation of future sounds or memory of past ones, stating only itself as sonic texture.

In the Black Gallery, Dadson performs on video (click here) with Music for Hard Times (Paul Winstanley and Tom Nunn)—splicing the concert in his residency studio with filmed shots of the morning cloud covering Hawk Hill, an observation point on Mario Headlands, a nearby mountaintop—while in one of the White Gallery videos (click here) he is accompanied by Japanese sound artist Aki Onda, who amongst his other activities drags a rattle on a lead across the floor, and drops tinkling ball bearings into glass bowls.

In the other White Gallery video, Shiver me Timbres: Building 961, Dadson plays his porcupine chair with a bow, and rocks so that lines threaded through the ceiling activate cymbals and rattles positioned in other parts of the room; strokes bending rods protruding from the wall so that the friction makes them hum; shuffles across the floor wearing squashed can rattles attached to his sandals; plays parallel wires stretched tight across the wall with taut catgut; plays other parallel wires stretched across the floor and which vibrate a large tin can jammed underneath; and climbs over a rickety ladder of mental rungs and tuneful swinging pipes on lines so they clang. This film—a classic Dadson sampler that presents a vast array of his devices—can be viewed by clicking here.

What is obvious about Dadson is that his excitement with discovering and making new sounds seems to increase as he gets older. Besides not faltering and never diminishing, that pleasure not only refuses to stay constant but actually accelerates. Exuding a joyful celebration of life and the diverse acoustic materials and sound-ordering methodologies that inhabit the world, he has an exuberance and love of playing that is unrelenting.