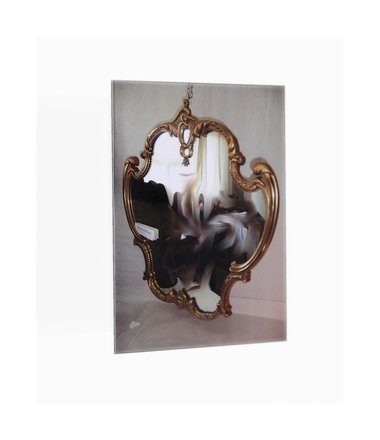 The question which Oram poses is why did, for the purpose of a sale, each photographer see it as necessary to eliminate all traces of their identity from the reflection? Was this about maintaining the strange anonymity of the internet, where each 'user' could present as little or as much of themselves as they desire?

State of Princes Gallery (on Princes Street, well positioned around the corner from Vogel Street) is the newest gallery to open in Dunedin. It is an unobtrusive but promising space with a uniquely defiant and lonely atmosphere. The voyeuristic glass tank-like structure of the venue allows the flurry of Friday opening-night attendees to be viewed from a distant position like tropical fish. The second exhibition to be shown in the gallery, a not-for-profit contemporary art and performance space, is the fascinating As Is by the elusive, interdisciplinary artist James Oram.

In this compact show, Oram’s works carry sentiments of anxiety, absurdity, irony and foreboding. The exhibition seems to continue Oram’s interest in cognitive processes (which he demonstrated, for example, with the perturbing multimedia piece Neural Market in the Sleight of Hand group show at the Dunedin Public Art Gallery last year) but in these works his focus shifts from considering the effects of art as a cognitive stimulus to everyday objects which represent, or profoundly challenge, human ideational processes and capabilities.

In As Is, mirrors reflect a realm of anxiety connected to notion of the Self, while a ceiling fan is drawn upon to demonstrate the inherent weirdness and variability of temporal experience. A preoccupation with paradoxes runs through the exhibition; it is a liminal, peculiar experience which exists in its own refreshing little world outside of emotional categories or a decisive intellectual regime. As Is is impressively ambiguous in every aspect: neither serious nor funny, neither insubstantial nor totally resolved.

Several of the works in the exhibition demonstrate Oram’s unusual obsession with collecting photos of mirrors for sale on auction website Trade Me. The phrase as is, the title of the exhibition, is one frequently found in Trade Me listings, by which the prospective buyer must accept the potential faults of an item, and the seller denounced responsibility. (Oram perhaps also uses it to describe his exhibition; he has set forth his idea, now it is up to the viewer to deal with it). Oram has used a number of found mirror-photos, strange and interesting in their own way, and ironically mounted them within custom made, mirror backed cases.

The mirror is a particularly powerful cultural metaphor of identity, or anxiety over identity (Jacques Lacan’s psychoanalytic description of a child’s first (traumatic) moment of self-recognition while looking in a mirror rumbles into mind). The photos Oram has selected demonstrate a strange, paradoxical inclination on the part of each photographer/seller to eliminate all traces of themselves. This removal of identity is seemingly inflicted by Oram - consensually or not - on the viewer, as the image is positioned in the centre of the case, where they would expect to see their face, relegating them to a marginal position. In used mirror for sale with gold frame, the only trace of the photographer’s identity is the smudge of foot at the very periphery of the ‘frame’ like a ghostly apparition, a negotiation of the appearance of the Self which similarly takes place within the faux-antique frame of used mirror for sale, circular with white frame.

unusually shaped mirror for sale, which Oram has ironically set inside a case precisely the shape of the depicted object, shows an incredibly empty image of which the door hinge is the most exciting detail, superimposed against a garish green background. The puzzle of the camera angle required to capture this image remains mysterious. One of the more interesting of this series of works is used mirror for sale with ornate frame. In this instance, the Trade Me lister has been bizzarrely inspired to photoshop the image to eliminate their own presence. The result of the seller’s efforts is aesthetically interesting in its own way: the curves of the frame are echoed in its surface, a psychedelic whirpool of colour, like a portal to an alternate dimension.

The question which Oram poses is why did, for the purpose of a sale, each photographer see it as necessary to remove their own identity from the reflection? Was this about maintaining the strange anonymity of the internet, where each ‘user’ could present as little or as much of themselves as they desire? Any viewer desperate to take up a Marxist position can read the process of self-erasure in each of these Trade Me photos as symptomatic of the fraught position of the subject in capitalism, ‘misrecognizing’ itself as a compulsory participant in the process of labour and consumption.

More philosophically, the strangely evocative discarded pile of sneakers and computer equipment reflected in used mirror with wood frame for sale displays the contradictory possibility of the photograph of a mirror presenting two discreet images in one - creating a sensation of dramatic cognitive dissonance and confusion in the viewer. In this case, the question inevitably formulated is which, out of the two simultaneous images, is the ‘true’ or ‘primary’ image? Is the reality reflected in a mirror, by which three-dimensional space is rendered flat, an image in itself?

Each of these works, though seemingly simple in premise, involves engaging visual attention to detail. The shape of each custom case counters or enhances the frame shape within each image. The simple decision to have affix a rectangle of black negative space next to each photo of a mirror provides a highly sophisticated foil to the indefiniteness of space contained within the mirrors depicted, providing the viewer with a graphic reprieve from the ontological weirdness. Through this device, Oram encourages the viewer to become engaged with the disconcerting, paradoxical environment of each work, but is insightful enough not to leave them stranded in it.

A very different, more decidedly sculptural work, reminder, similarly plays with instances where human perception is challenged, or thought processes fragmented or incomplete. The work, a metal knot suspended by a crooked finger extending out of the wall, is affectively charged and powerful, referring to the folk tradition by which you tie a knot around your finger to reminder you of something. Recalling the disguised creepiness of nursery rhymes, the need to remember something (or more precisely, not forget something, and avoid cognitive error) is signified as a noose-like shape.

The mental acts which we perform every day, though mundane, are sites of anxiety and fear of failure, for the use of cast lead as the unbending, indestructible material of the knot makes the demand it poses imperative and constant. The surreal image of the finger extending out of the wall, is reminiscent of the iconic scene in Roman Polanski’s 1965 film Repulsion, where a cluster of hands emerge from the plaster of a hallway to accost the mentally unhinged protagonist. The signification of mental collapse and anxiety through the grotesque manipulation of the (typically neutral and stable) art gallery wall is, like every other feature of the exhibition, seemingly simple but pertinent and engaging.

As Is concludes with boring, a metal industrial ceiling fan on constant, mid-speed rotation. The work is a consideration of the mundane, unceasing fixtures in everyday life which we use as metaphors for our mental activity or lack thereof. The work demonstrates the metal temperature of boredom as a temporally bound phenomenon derived from monotony, de-void of emotional colouring. But, as expected, Oram turns this fairly banal reflection into a straightforward but mind-altering paradox by placing the fan in a hovering position just above the floor. The usual purpose of the fan, to conduct heat from the ceiling throughout the room, is made completely redundant, the pithiest display of wit that the exhibition offers. Yet, at the same time, the work retains the mysterious, indecipherable force exerted by the others in the exhibition.

While the works are clever, immaculately presented, and aesthetically pleasing, they are never comfortable, somehow keeping the viewer on edge in a state of unfulfilled anticipation. The unyielding cycling of the fans blades in boring, shiny and reflective like knives, has a hypnotic quality of undeclared promise, as if they could spin out of control at any moment. 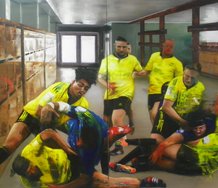 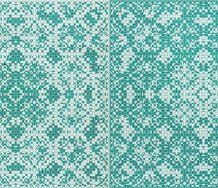 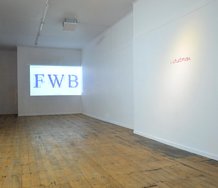 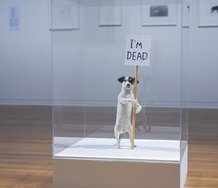