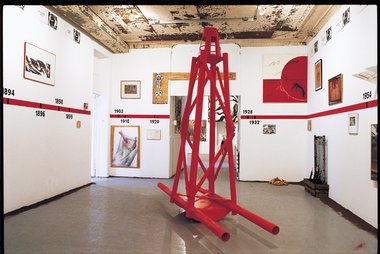 Bringing together seven contemporary artists, including New Zealander Michael Stevenson, the exhibition uses the 1984 work, Timeline: A Chronicle of US Intervention in Central and Latin America, by the New York based collective Group Material as a starting point to re-examine the current state of Central and Latin American society and politics in the era of globalisation.

A Chronicle of Interventions, the new group show which recently opened at Tate Modern’s Project Space is a collaboration between the London gallery and TEOR /éTica in San José, Costa Rica. Bringing together seven contemporary artists, including New Zealander Michael Stevenson, the exhibition uses the 1984 work, Timeline: A Chronicle of US Intervention in Central and Latin America, by the New York based collective Group Material as a starting point to re-examine the current state of Central and Latin American society and politics in the era of globalisation. The exhibition touches on the current economic climate as well as addressing political unrest, past and present, in a way which seeks to go beyond a simplistic presentation of violence and suppression.

In the accompanying notes to the exhibition, the curators Inti Guerrero and Shoair Mavlian offer a careful criticism of the 1984 work by Group Material, highlighting that it could be argued the work responded more to the political culture of leftist activism in the US at the time than the region it addressed, with only a small number of Central and Latin American artists participating. This new show features two artists each from Panama and Guatemala, alongside one each from Costa Rica, New Zealand and Germany. The works featured are less overarching than the Group Material work as well, teasing out individual narratives and threads of inquiry, without ever veering too close towards a larger master narrative for the region. Of the seven artists, six employ moving image in some way and of those, three present the human body as a medium to express the impact on the regions in question. The development of the local and global economies also features prominently in several of the works, highlighting the exploitation of the area and its people by outside parties, both political and economic.

Humberto Velez’s work, The Last Builder (2008), pays homage to the history of film and the practice of bodybuilding, while at the same time referencing the role that the workforce played in the building of the Panama Canal and the discrimination and prejudice they faced (particularly workers from the Caribbean). The body builder striking classic poses in front of the open sea represents the duality of the strength of industry and engineering which transformed the region through the building of the Canal and the oppression levelled at those who took part in its construction and bore the negative implications of the international entities responsible for it.

In Naufus Ramirez-Figueroa’s piece, A brief History of Architecture in Guatemala (2010), (there is a separate performance of the work here) three dancers wearing costumes that resemble buildings move around a space to the sounds of a marimba band, before colliding together. As their costumes, a Mayan era Pyramid, a Baroque Church from the colonial period and a modernist building fall away, they are left standing naked. The different timelines represented by the three buildings speak not only to the violence in the region wrought by competing powers throughout its history, but the resulting tension between the different strands of culture within one region even after the end of official colonial control.

Regina Jose Galindo’s video work, Tierra (Earth) (2013), contains the most direct references to the violence and loss of life caused by social and political unrest, specifically in Guatemala. As the artist stands naked in a field an earth mover slowly begins to dig around her, creating a hollow which resembles a mass grave. Galindo’s work manages to explore the aftermath as absence and tragedy, rather than relying on graphic descriptions or depictions of violence. In a way, her stoic and somewhat minimalist performance reminded me of Alfredo Jaar’s work Chile (1981), before leaving, where flags along the coast line are used to mark where the bodies of Allende supporters were washed up; the power of these symbols dictated by the context of their geography and the simplicity of their form.

Michael Stevenson‘s video work is based on an account given by the bodyguard of General Omar Torrijos. The General was the de facto leader of Panama from 1968-1981, and is perhaps most well known for signing the Torrijos-Carter treaty with the US in 1977 which (eventually) secured Panamanian sovereignty over the Panama Canal Zone in 1999. The script for the work, read out in Spanish, is based on the observations of Torrijos’ bodyguard (a mathematician known as Chu Chu), and discusses events surrounding the exiled Shah of Iran’s stay on the island of Contadora. The narrative is interspersed with various asides discussing theories of probability, hence the title Introduccion a la Teoria de la Probabilidad (Introduction to the Theory of Probability) (2008). Stevenson’s work hits on the notion of ‘calculation,’ and the cold and strategic approach to foreign policy which can be argued was (and still is) behind so much international intervention, particularly in the region of Panama. It also suggests something of the disjointed way these different regional histories are retold and re-examined, and the way the passage of time re-contextualises their importance on a contemporary stage.

Elsewhere in the exhibition, the consideration of industry and the economic exploitation of the region come into play more directly. Oscar Figueroa’s work, Demeritos (Demerits) (2013), functions as an intervention in itself, with the artist spreading out a 3, 275 metre line of blue plastic to form a symbolic barrier. The plastic is the same material originally used by the United Fruit Company to protect bananas, but the line it cuts mirrors the boundary used by the company in the 1920s to keep the black population of plantation workers from moving into San Jose. At the time, the measure was supposedly taken to prevent certain diseases from spreading to the capital, another example of the tension wrought by outside forces within the region through economic agendas and notions of racial segregation.

The lack of a more specific central narrative renders the exhibition as w hole less of an overtly political enterprise and more of an investigative and research oriented project, which is in many ways its strength. By collecting a group of works which are less directly in synch, the show presents the multiplicity of narratives which emerge from the region after decades of international intervention by opposing political and economic forces.