Polounine and Brickell at RM 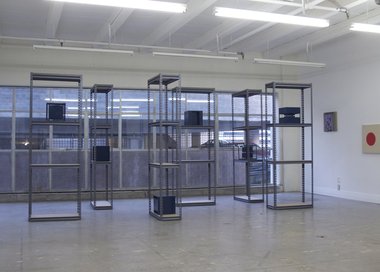 This two person show at RM is more two exhibitions juxtaposed together than a cohesive entity where two artists have blended to create a third. Yet the contrast is mentally stimulating: Oleg Polounine presenting six metal box forms, riveted and painted and alluding to the permutations of Sol Lewitt and Donald Judd, but incongruously presented on freestanding warehouse shelving; Heidi Brickell showing work related to her recent Artspace exhibition, painting deconstructed with canvases of glued together and folded material, often ‘unstretchered’. Her nine disparate components are placed in groups of three on three walls, as if some sort of linear ‘magic square’ or rebus.

With Polounine the dark blue box forms are like small cubes suspended within larger, skeletal, outer cubes, square planes held up on struts so you can peek through, under and around. Different alignments and differently intricate internal relationships are spread out on the six part scaffolding. Arranged at different levels on the clunky industrial shelving which is not lined up in a row but arranged in varied formations, they sparely hint at Giacometti and Nevelson.

Brickell’s paintings and wall-mounted splattered timber ledges are much less coherent than Polounine’s contribution. Though consistent in height they are fragmented in relation to each other - as if arbitrary scraps, some even directly bodily (with a lock of glued on curly hair as a type of mark).

The best of the canvases exploit bare fabric left by vertical masking tape that has been removed, and lopsidedly frenetic paint daubing: severe geometry next to organic release. The whole selection tends to play on edge and softness of contour, with parts often positioned using a calculated sense of placement indifference. Brickell’s sense of purpose and resolved organisational structure, as apparent in her Artspace show, seems not so obvious here - vaguely exploring alignment of shape and providing a more casual, rhythmic, horizontal and partial encirclement of Polounine’s vertical dark towers.