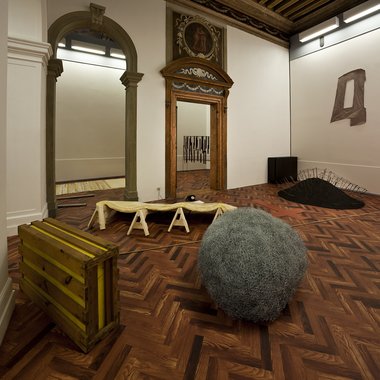 The surroundings of the Ca' Corner della Regina work against the curators. This beautiful old building, built in the 18th Century, gives the setting a feeling of delicacy, as if one must walk on eggshells in between important objects, a far cry from Bern's pointed avant-gardism.

Situated in the Fondazione Prada, When Attitudes Becomes Form: Bern 1969/Venice 2013 is a reconstruction of Live in Your Head: When Attitudes Become Form, which was curated by Harold Szeemann at the Bern Kunsthalle in 1969. This reconstruction, save for a few works which were unobtainable, has faithfully recreated the rooms from the show in Bern alongside archives explaining its curation and documentary footage of interviews with the artists and other press materials. Where works could not be obtained, grey dotted lines mark out the exact dimensions of the missing works, alongside black and white photographs of the originals as they sat within the Bern Kunsthalle.

The significance of Szeemann’s show has caused some considerable excitement for this new presentation. The press materials accompanying the exhibition go to great lengths to point out the importance of the game changing movements and ideas which saw some of their first public realisation in Bern, such as Post-Minimal art, Land art and Conceptual art, amongst others. There are also previously unpublished materials from the Szeemann archives to cast further light on the processes behind the original show. In reviewing some of the information for the new reconstruction, one sentiment struck me in particular:

“Characterised by a new approach where everything was left to the liberating process of doing, where the viewer was not impeded by boundaries, protection systems, pedestals or perimeters, the exhibition became a dialectical field of encounter between individual artists and the curator, between the event and the architecture: a place where the works formed links with each other in a kind of continuously evolving organic weave.”

Ironically, my initial response to the show after walking through it was that the mood of this new reconstruction was entirely the opposite. The entrance to the exhibition had an almost corporate feel, with large imposing marble surfaces, and a staff who all seemed to resemble secret service agents. That sense of being monitored extended into the show itself, where strict barriers and the watchful stares of the staff seem in complete contrast to the notions of open expression and barrier free access to the art mentioned in the press materials.

This shouldn’t seem surprising considering the differences between the controversial and somewhat revolutionary show in 1969 and its new presentation here; it merely reflects the deeper challenges in reconstructing the Bern exhibition. While the new presentation strives to recreate exactly the layout and presentation of the previous exhibition, effectively turning each room from Bern into a sort of ready-made which is shown without adjustment (save for the unavoidable gaps), the show suffers from an inescapable air of reverent mythologizing, which taints the immediacy and newness which was one of the 1969 exhibition’s central claims to importance. The way space is given to the missing works furthers this idea of certain pieces being lost to time, like ancient artefacts, rather than vibrant, challenging pieces of contemporary art.

The surroundings of the Ca’ Corner della Regina, in this respect, work against the curators as well. This beautiful old building, built in the 18th Century has the air of an antiquity about it, which inevitably gives the setting a feeling of delicacy, as if one must walk on eggshells in between important objects, a far cry from Bern’s pointed avant-gardism. I found the assertions of a kind of double occupancy, where the presence of the revolutionary artists and their practise occupying the Bern Kunsthalle was mirrored in placing such a profoundly 20th Century exhibition in the walls of an 18th Century Venetian palace also somewhat hollow. There is nothing radical, but rather reverent about the painstaking installation of each room as it was originally, which seems a far cry from the immediacy and danger of the Bern exhibition.

This of course detracts from the most important thing, which is of course the body of works itself. The list includes pieces from Joseph Beuys, Richard Artschwager, Giovanni Anselmo, Walter De Maria, Alighiero Boetti and Michael Buthe. Many feel strong even now, bold sculptures and installations with rough materials that manage to stand out and leave an impression within their imposing setting.

It seems clear from the reconstruction that the mythology of the show with its various represented movements and ideas is held over and above the reputations of the individual artists and their careers. However with the benefit of hindsight it is interesting to note what became of the artists and how their careers developed. The excitement of the presentation in Bern was significant because of the suggestion of what could be. The reconstruction tries to harness this, but the result is like reading a history book while pretending you don’t already know who won which battle.

Ironically, what seems to serve the works better than the exhibition itself is the accompanying catalogue. Opening with a large selection of images from the original opening, the rest of the large volume contains essays and images from a variety of sources, weighing in on the significance of the exhibition and the challenges faced in reconstructing it. One wonders if this wouldn’t have worked better as a hypothetical starting point: on the worth of such an endeavour and a chance to consider the show via appreciative hindsight. A different presentation, where the historical importance of the works and the show itself was more openly accepted, would have served the show better.

Not quite back to the future - after 43 years this show as at the top of many art punters ...

Not quite back to the future - after 43 years this show as at the top of many art punters shopping list when I was in Venice. When I finally got there the effect was as much puzzling as revealing. the re-staging of the exhibtion managed to hold enough 'Shock of the New' punch from the original but you had to work really hard to decipher the layout and relationship of many of the works.

However the sense of being watched and managed by a battalion of Prada clad attendants became tiresome... yes you can stand there... no you can't cross that line...which line?

Who really was going to steal Joseph Bueys lard?