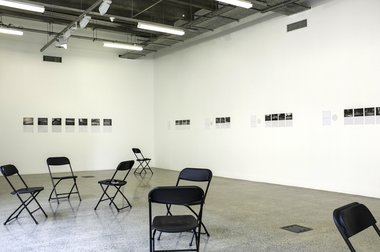 Clegg likes to gently tease, either by withholding information (such as carefully cropping his photographs to make ambiguities of scale, so that sound becomes important for contextual clues about what we are looking at) or else by providing a surplus so you get overload and interference (the wall speakers scramble your listening of headphone recordings). The show is a combination of tight control and embracing of coincidence.

David Clegg
transmissionspace and the index of atmospheres

David Clegg is well known for his two projects that resulted in websites, The Imaginary Museum (which interviewed European directors and curators about specific features in museum design) and archivedestruct (which examined with photographs and recordings the slippery nature of aural and visual identity in international cities.)

This St Paul St show in Gallery Two is two connected works put together to extend both earlier projects: transmissionspace (it grew out of The Imaginary Museum) and the index of atmospheres (from archivedestruct). It is a pristine elegantly hung show where you can take a portable seat and position it where-ever you please. You can look out the window at the St Paul St traffic and pedestrians while listening to recordings playing from speakers on its flanks, or study the six groups of three or four photographs on the other walls while listening to relevant soundtracks on portable Walkmans.

Clegg likes to gently tease, either by withholding information (such as carefully cropping his photographs to make ambiguities of scale, so that sound becomes important for contextual clues about what we are looking at) or else by providing a surplus so you get overload and interference (the wall speakers scramble your listening of headphone recordings). The show is a combination of tight control and embracing of coincidence and Clegg is preoccupied with layering: the mingling of sensory data with interiority ie. thought processes and memory.

So here there are two works. One is about the physical thresholds that separate museums (as repositories of ‘art’) from the outside ‘life world’, such as the revolving doors of European museums, the AUT window that is a membrane between both zones. The other is a conceptual or semantic threshold, that blurs mental imagery with optical or aural sensation, for the artist tells us that while he is sitting with his camera in the spaces he documented outside museums in Berlin and Paris, listening to the sounds he presents for us to hear (each band has a matching image), he was also thinking about particularly striking artworks inside the galleries. These he lists on the wall label that goes with each set of images, with each city transmissionspace. These include paintings of turntables by Gerhard Richter or daily dates by On Kawara, photographs of twins by Diane Arbus, an ongoing projected slide sequence by Lothar Baumgarten and a soap foam sculpture of Luka Fineisen.

Like many artists Clegg is interested in the significance of spatial environment, either as a socially ‘invisible’ area lying between more important destinations, or if not focussing on its obscurity or peripheral nature, then examining it as a place conducive to thought and daydreaming - such as a grassy park with seats. His discussions, as reflected in Charlotte Huddleston’s excellent essay, mention the work of anthropologist Marc Augé and his study of peripheral spaces, but when I see Clegg’s stacking up of different subtly impacting components, I think of Gaston Bachelard and his psycho-analytical studies of how space and reverie, or of Roland Barthes and his interest in the erotic dynamics of reading. Clegg’s photographs are positioned in the top half of A4 panels, the bottom half being left blank as a sort of screen for the viewer’s active imagination - a resting place for the unseen imagined artwork in the nearby museum.

With these clusters of sensory data and mental images, I also think of the cognitive scientist Ray Jackendoff, and his account of consciousness, language and meaning, and how for him unspoken thought is structured not in terms of syntax (Chomsky’s theory) but in phonology, the sound of words. The underpinning logic when thought is ‘surfacing’ comes from the inner ear, the mental acoustics of speech. I mention this because if viewers have an aurally pronounced eidetic (photographic) memory then the separation between physical sensation and ‘mentalese’ in a show like this becomes less robust. Real hearing and imagined hearing become much closer (implying incidentally - outside issues of dualism - that perhaps Duchamp’s separation of the ideational and the retinal is spurious).

Jackendoff uses the term ‘character tag’ to describe mechanisms that we use to separate the imagined from the sensory, so we can differentiate what is ‘in our head’ from what is ‘out there’ in the world. Clegg specialises in mingling these two domains, as well as various sub-varieties (like visual and aural data) within each of them. Our memories of art we have seen or read about (and/or European museums) and the sensations of his sight and sound documentation twist and turn around each other - in the confines of Gallery Two - to merge and rapidly become inseparable.