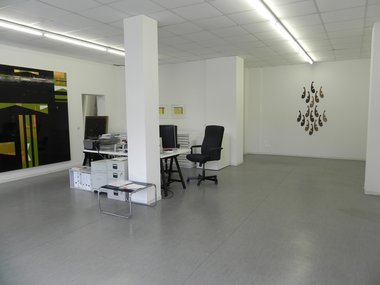 Morrison was optimistic about the development in the last few years of a New Zealand artist's ability to access overseas creative and commercial opportunities, even while still being based in the South Pacific. He made particular mention of Creative New Zealand's move in recent times to support an artist's development over a longer period of time.

The new group show, Fallen Into Chaos & Order, now showing at Hamish Morrison Galerie, is the first to be held in the gallery’s new location on Friedrichstraße, just down from Checkpoint Charlie in one of the busiest tourist centres in Berlin. The show itself is a difficult exhibition to write about; each work seems to fit into the group while also standing far apart, creating a bewildering duality at times.

When I sat down with Hamish Morrison a week after the opening, he was quick to admit that Fallen Into Chaos & Order is a loose show, put together in a relatively short timeframe after a planned solo exhibition had to be postponed at the last minute. Featuring regular Hamish Morrison artists such as Judy Millar (NZ) and Prudencio Irazabal (ES) as well as guests including Olle Borg (SE) and Russell Moses (NZ), Morrison acknowledges that while Chaos & Order set up some clear parameters, the artists’ use of materials suggests a whole other dialogue between the works.

Judy Millar’s two paintings, much smaller than the large scale installations some typically associate her with, are described in the accompanying press release as tense, energetic and physical, where seemingly random smudges and scratches in the paint belie the control and direction behind them. Dutch artist Ronald de Bloeme’s large-format painting Not to be Reproduced II, by contrast, is dense and layered; various colour fields lie buried and obscured by glossy black paint, and the size of the work as a whole is imposing in the small gallery. While their approach to painting seems different, each suggests a sense of disconnection or obstruction.

Grids also appear as a recurring motif in several works, perhaps most strikingly in American Tad Mike’s delicate walnut ink works on paper. German artist Frank Badur’s works play with a grid motif as well, with seemingly perfect ruled lines being subtly undermined by hand drawn ones. The effect creates movement and tension in a shape of ostensible conformity.

Russell Moses’ work, a series of beautifully fashioned fish hooks, stands out not just for its materials, but for their strange familiarity in such a foreign setting. Morrison commented that the response to Moses’ work was in many ways emblematic of the issues some New Zealand artists can face when breaking into foreign art circles and markets. These deeply familiar shapes have confused German audiences to the gallery, highlighting the difficulties some artists face bringing their geographically and culturally unique influences to foreign shores.

When I pressed Morrison further on his own experiences as a New Zealand gallerist in Germany, he was calm about the baggage of any sort of national identity. For him, factors like that came a distant second to his own priorities in selecting and promoting artists and their works. He was equally candid in his acknowledgment of commercial interests, telling me he often saw artists and works he thought were fantastic, while conceding he could never sell them in his current setting. Discussing the clear disadvantages of distance and time, Morrison was optimistic about the development in the last few years of a New Zealand artist’s ability to access overseas creative and commercial opportunities, even while still being based in the South Pacific. He made particular mention of Creative New Zealand’s move in recent times to support an artist’s development over a longer period of time, rather than what was arguably the previous tactic of funding one large project and relying on the artist to continue on from there alone.

For the gallery itself, things are looking busy until the end of 2012. In September Morrison will open the previously postponed solo show from Prudencio Irazabal, followed by exhibitions from Judy Millar and Billy Apple. Further into the future Morrison is looking to relocate once more into a larger space, more akin to the previous location on Heiderstraße, an old warehouse which sat among many galleries not far from the central train station Hauptbahnhof. Fallen into Order & Chaos finishes on July 21.