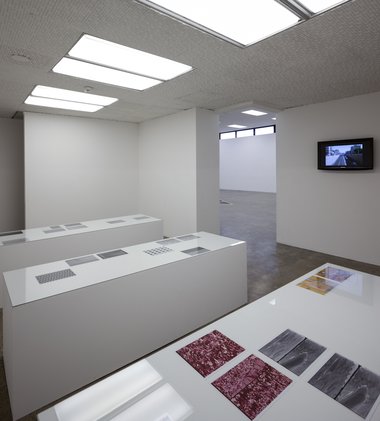 This May-June show is the annual intern's presentation, one for which they often spend many months preparing. Consequently as part of this Santry has written a carefully argued little essay in a takeaway pamphlet examining the nature of the dense ‘cloud' of virtual images that surrounds us all, discussing how these representations affect (if not generate) reality.

Arron Santry is the current 2011-12 curatorial intern at Artspace. With director Caterina Riva, he plays a big role in getting information circulated about those artists that that organisation introduces to Auckland audiences. They, with others on the staff, write publicity material for the exhibitions so sometimes you get at least two explanations. It’s doubly helpful in providing inroads.

This May-June show is the annual intern’s presentation, one for which they often spend many months preparing. Consequently as part of this Santry has written a carefully argued little essay in a free pamphlet examining the nature of the dense ‘cloud’ of virtual images that surrounds us all, discussing how these representations affect (if not generate) reality.

Three of the artists directly specialise in this area of technical expertise: Sean Snyder is a researcher scrutinising satellite news footage to discover image prototypes of camera work for establishing location, and creating an extensive archive to analyse what happens when analogue data get converted to digital; Yousake Fuyama makes spectacular projections with moving grids of needlelike fine lines that sometimes interact with gallery visitors; and Oliver Laric examines digital technology’s ability to transmute and be reproduced in a plethora of permutations, creating multiple alternative fictitious ‘realities’.

Sean Snyder is a hoarder of copious cyber images that he rakes through and analyses. For Artspace he presents three low minimalist plinths with sets of (usually paired) images aligned as if in a structuralist diagram. They are taken from news broadcasts, and often quite abstract, rich in decay and gridded up. Intriguing to look into closely, they hold your attention more than the video (Analepsis [Flashback]) which has no logic in its organisation of global samples of urban wasteland or war footage - apart from sequences of repeated camera pans and angles - deliberately scrambling up different locations so they become interchangeable. It is quite a dry presentation.

Oliver Laric is much more accessible with his Baudrillardian theories about mass media, image replication, manipulation, mutilation and desecration - and slick sensual presentation of material. While he provides his audience with clearly argued commentary, Laric has a poppy feel in his philosophical meditations about the copy and remix. His amusing video Versions is rich with entertaining examples of digital play, such pornstar bodies with transplanted Hollywood faces, or the famous French football goalkeeper Zidane headbutting an opponent in 35 reinvented permutations. He also prepares clip art and film snippets that he anticipates people will appropriate, deliberately initiating a chain of permutations from images he has found and launched into cyberspace.

Yousuke Fuyama‘s installation is interactive with a sensor that transfers your silhouette on to the wall showing an intricate twisting and receding rectangle made up of lots of small white lines as fine as metal filings. The image is reflexive, because it is actually of the computer itself positioned in the room. It is fun to stand inside the doorway and see how varied a range of responses in the splintered, twitching image you can get by jumping about and flailing your arms, distorting and interfering with the reception.

Fuyama’s nightclub gig at Snake Pit however had a very different feel with its layered shimmering planes being more architectural, and going through rippling riffing permutations and loud sibilant sound. It was an impressive display, something like these examples here.

Joseph Nerney’s set of small rectangular canvas paintings with small isolated non-aligned strokes in four colours seem to have very delicate pale washes in their centres, until they slowly move. They are so similar to afterimages that it takes some time to realise that the effect is electronic, not optical - caused by LCDs hidden inside the stretchers, projecting MAC screensavers onto the back of the canvas.

This is fascinating work but not for reasons set out by Santry, who claims it references popups, banners and embedded images - yet such things (to me anyway) are impossible to detect. Its real merits are its teasing of the viewer and their faith in their own perceptual processes. The movement of the background ‘stains’ is very subtle - barely detectable.

The contribution of the Dutch performance artist/dancer Vincent Riebeek at the show’s opening was less directly linked to the main digital theme and more to primal bodily motifs like the standing positioned figure or tumescent penis. A New Age ambience dominated with a large mystical triangle on the floor, and on the wall a monitor showing a hardening cock overlayed with rippling waves, sunrises, dreamy music and pearlescent glittering streamers. Like Rebeek’s performance the setting was (and residue is) highly ambiguous: A worshiped lingam for the tribe to dance around? Celebration of gay desire, or was it straight? Serious, politically aware, planetary ethos or mocking ‘hippy-dippy’ derision?

After a sequence of studied poses that seemed to reference Greek sculpture and yogic positions, set within flowing movements locked to a disco beat - and using glittering props that from the ceiling poured down silver emulsion that he could rub over his lithe semi-naked body - Riebeek‘s actions had an informality (almost an amateurishness) that culminated in his singing of a Beyonce song and reading a Marina Abramovic artist manifesto. He was accompanied by a video of his partner Florentina playing her guitar.

In fact with his engaging charismatic manner Riebeek seemed to counter the hi-tech, post-structuralist mood of the rest of the show, accentuating personal presence over impersonal forces digitally manipulating the malleable masses. For all his ties to various referenced communities he seemed to represent the agency of the contemplative but vulnerable, spontaneous individual. A puzzling inclusion in an unusual and valuable exhibition.