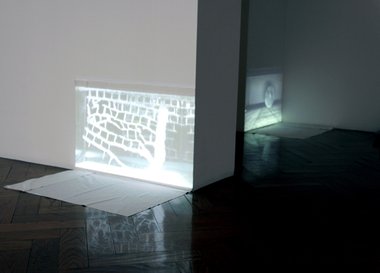 The time span ranges from 43 mins to 14, and with all four looped films being projected simultaneously - all viewable from one vantage point - you inevitably lose concentration, get distracted by a film's neighbour and miss some event that explains a later compositional state. You could have many visits and not grasp it all.

Richard Frater
The House with the Mezzanine

One of my favourite South American artists is the Argentinian Guillermo Kuitca who in the mid nineties made many paintings where he merged road maps from different countries into condensed single images rendered on children’s mattresses. They seemed to be aids for dreaming, or at least devices to assist reverie. Displaying highways to other worlds.

Richard Frater on the other hand is usually known - amongst other things - for his sculptures of carefully shaped pieces of uplifted and glued-down carpet, and life-sized photographs of creased rumpled sheets printed on top of creased rumpled sheets (a version of Daniel Spoerri’s rephotographed stained tablecloths). In this Crockford exhibition he has a set of four DVD projections positioned on the outer lower corners of gallery walls, butted above the crease where the wall meets the floor.

In each case below the moving image, lies half a pillow slip. Two intact used pillow slips are also displayed higher up on the walls. Again, pillowcases, like mattresses, are presented as sites for mental drifting. As the show’s Bachelardian title alludes, the mezzanine is where architecture presents bedrooms as spaces for dreaming. And there is a digitally printed photographed creased sheet in the back room to assist.

Frater’s enigmatic looped films, made over several years, mostly show glass tanks containing solvents into which are placed mysterious fragile planes of gridded rectangles or squares that are filmed slowly disintegrating. You are never quite sure exactly what chemical processes are involved. The bubbling liquid could be water or turps or meths, the tumbling units of sugar or acetate or ice - or something else. Frail collapsing transparent solids slowly sink to the bottom, other splintering just-as-delicate substances float upwards. Some films have beautifully soft, earthy cow-shit colours, others starker black and white contrasts.

In Frater’s mad gallery laboratory, with its light severely muted by whitewashed windows and thin white blinds, other films involve translucent balls, hollow casings, crushed eggs and Paua shells that move around in air - not fluid. One has stills mixed with moving imagery, another floors of polystyrene layers that rise with increasing water underneath, or using slowly descending cameras.

In all cases motion and placement are carefully manipulated, as is a dramatic flickering light that ranges from Vermeer to McCahon in its feel. The time span ranges from 43 mins to 14, and with all four looped films being projected simultaneously - all viewable from one vantage point - you inevitably lose concentration, get distracted by a film’s neighbour and miss some event that explains a later compositional state. You could have many visits and not grasp it all. The processes allude to many earlier experimental film /videomakers, from Michael Snow, or Fischli and Weiss, to perhaps Daniel von Sturmer or even the great Russian director Andrei Tarkovsky with his obsession with water - yet Frater’s own voice is unmistakably distinct. A remarkable new talent in video/film.

This is an extraordinary show, one that with its richness of slow moving, highly evocative processes seems destined to become legendary in Auckland art history - like Fiona Connor’s Something Transparent exhibition a few years ago at Michael Lett. With Easter coming up, if you want to see it - and you’d be a fool not to - you have today and tomorrow to do so.