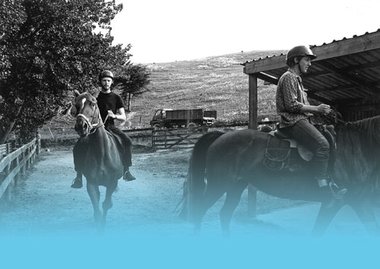 Mitch, Lundberg and Frater have achieved a curious mixing of references to the earlier show, poster image, partially elucidatory essay and current installation that draws you in so that you ponder their individual creative histories - and how these here overlap.

In this show in the University of Auckland library entrance Roman Mitch ambiguously wears his curator’s hat (he is also an artist) and - like other individuals such as Simon Esling recently at the Gus Fisher - has been inspired by Lars von Trier’s unusual film The Five Obstructions. The result is that he has invited two artists, Patrick Lundberg and Richard Frater, to remake an exhibition they presented earlier at Window in 2007. In the spirit of this film, where one director stipulates to another a set of extremely difficult conditions under which the new version is to be made, Mitch has created stumbling blocks (the specifics of which are never publicly stated) in an attempt to push the artists in new unanticipated directions.

Like Lars von Trier’s very patient (but still intellectually curious) friend Jørgen Leth, Lundberg and Frater acquiesce and resist. Sometimes there is a sense of Mitch’s (unstated) blockages being rejected and they repeat earlier developments, in other ways they seem excited enough to move along unforeseen vectors.

Looking at the archival documentation of the original 2007 exhibition, the online images and attendant texts tell us more about Frater’s contribution than Lundberg’s. His strange collage on the foyer floor of cut-out sections of carpet refers to medical text books and designer rugs, while a black on white abstraction by Lundberg on the Window gallery wall was loosely based on a Coke hoarding where the drink is being consumed in a party setting.

The new work deliberately mixes up the two artists’ trademark styles. The back wall has a linear drawing made by subtracting wall paint with a grinder to reveal layers of underlying colour. These open curved lines seem to refer to Frater’s carpet collage, not the expected perpendicular right-angled archaeological ‘samples’ Lundberg has often exhibited.

On the floor is a pattern of marks made by sweeping thin mud with a straw-bristled broom. Arrows drawn into it point away from the window glass and allude to Lundberg’s system of pencil wall drawings that reference the architecture of the exhibiting space.

This is a clever exhibition that has the floor component gradually get destroyed as viewers walk on the dried mud to look at the wall work. The poster shown above that was designed by Mitch is also a shrewd contribution, showing the two artists riding horses (Smithson-style) on a farm with the movement of the horses seemingly a metaphor for time, while the onsite floor mud alludes to the farm environment. On the outside of the folded poster bearing Mitch’s explanatory essay appears to be a Lundberg drawing (it could be a Mitch) that looks like pictographs based on the original Coke billboard painting.

Mitch, Lundberg and Frater have achieved a curious mixing of references to the earlier show, poster image, partially elucidatory essay and current installation that draws you in so that you ponder their individual creative histories - and how these here overlap.

Thanks Roman for this information and it's link to images. They help explain the processes within the show considerably.

General restrictions: Time—16 hours each Material budget—$0 All material must already be available to you or I. Iʼm open to ...

Time—16 hours each
Material budget—$0
All material must already be available to you or I. Iʼm open to discussing the materials in response to your ideas, but here are some of the things in my own studio equipment that can be used: Engineerʼs chalk, Chalk pen, charcoal, surface cleaner, bleach, assorted high quality oil paints, ink receptive canvas, lemons, spaghetti.

Patrick and Richies instructions as well as some photos can be found here:
http://innercitycleaning.tumblr.com/

Thanks Roman for this information and it's link to images. They help explain the processes within the show considerably.