Communicating With the Dead 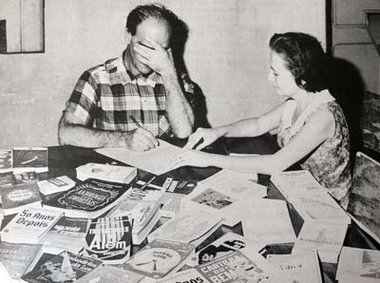 Guimaraes' descriptions of Xavier's various spirit guides and the places he ‘visited' to see the dead are fascinating, as are her observations about the relationship between spiritism, Xavier and the repressive right-wing dictatorship. His skin was white, as was that of his spirits, and there was a mutual antagonism between spiritism and the left-wing resistance groups. Xavier's spirit guide authors never spoke of torture or oppression.

The theme of communicating with the dead is investigated in this three person show of a Kiwi, a Brazilian and an Englishwoman. This now quite current topic was first recently explored in Natasha Conland’s 2007 curated Mystic Truths at Auckland Art Gallery. One of the artists included there (and also in the Christchurch SCAPE, Don’t Misbehave) was Dane Mitchell - an individual well known for his use of witches and placing of spells within gallery architecture. Clever at mixing nuances of interpretation to do with the sociology of museological ‘best-practice’, he has had the persona of a ‘troublesome’ artist who raids gallery skips and harasses gallery directors (as he used to do). The psychology of ‘alternative religions’ like spiritualism seemingly has parallels in ‘the artworld’.

With his Aid to Sight (first shown in Basel in 2008) Mitchell in Beyond makes us look at ‘teleportation’ or ‘apport’, the alleged transferral of material or an object from one site to another through mental energy, or the mysterious appearance of items during spiritualist séances. With a little help from Clinton Watkins who provides some discreet background music, Mitchell, like some seasoned hypnotist, soothingly implores his gallery visitor to stare closely at his black slab leaning against the Starkwhite wall, and to ‘feel the psychic current that flows - vast, immeasurable, indescribable, inconceivable - focus your mind, focus your eyes, cultivate the power of attention, concentrate, breathe in, breathe out, stare…’

Nearby, in the area under the Starkwhite staircase, the site of Curse, a previous temporary spell he had placed by a witch, Mitchell has Apport, a projector with a film showing the same slab in a patch of Coromandel native bush. The use of analog technology is calculated as the film loop gradually gets darker from the celluloid disintegrating and the image getting covered with black specks. Alluding perhaps to fading memory, gradual physical disappearance or to black magic. There is also a pun here on ‘projection’ in the sense of manipulating matter through psychic power, and also in the sense popularised by Freud’s term for a defense mechanism where undesirable thoughts are imposed onto other people.

The key component of this exhibition is the slide carousel and 20 minute spoken voiceover (on headphones) provided by Tamar Guimaraes that discusses the history of Brazilian Spiritism. (Spiritism applies to the phenomenon in non-English speaking cultures, as opposed to Spiritualism that is English-based.) Guimaraes focuses on the extraordinary career of Francisco Candido Xavier, a very famous psychic and psychographer who during the sixties and seventies ‘transcribed’ over 400 books dictated to him by the dead.

Guimaraes’ descriptions of Xavier’s various spirit guides and the places he ‘visited’ to see the dead (all still enthusiastically at work in factories) are fascinating, as are her observations about Portuguese/Brazilian culture in general - especially the relationship between spiritism, Xavier and the repressive right-wing dictatorship running the country. His skin was white, as was that of his spirits, and there was a mutual antagonism between spiritism and the left-wing resistance groups. Xavier’s spirit guide authors never spoke of torture, violence or oppression.

Brazilian culture seems so different to our own that this highly informative artwork provides a bit of a revelation with its vivid detail and cogent analysis. The images and soundtrack hold up to several visits.

Georgina Starr‘s work was last seen in Aotearoa New Zealand in 1997 as part of the brilliant MCA-curated Pictura Britannica exhibition at Te Papa, and you might remember that this country became obsessed with the resulting ‘Virgin and the Condom / Tania Kovats’ controversy for almost six months. Starr showed a spot-lit toy plane and a video of herself as aviator at the time.

In Beyond she presents a work I am the Medium that is part of a year-long project involving monthly interactions with different mediums and making audio recordings of seances. Her installation upstairs at Starkwhite involves a solitary playing spot-lit record that contains unexpected sounds which she observed between the spoken sentences of the mediums - clicks, tapping and even other voices. These sounds are given an isolated groove each of 1.8 second duration, and they repeat unless the needle is bumped or the floor shaken. On my visit I thought I heard - amongst various bits of static, bursts of whistling and clicks - a voice repeatedly commanding me to ‘get a day job.’ Mmm.

The contributions from the three artists in Beyond work well together. Starr parallels the paranormal content of both Mitchell and Guimaraes, her recording referencing a kind of auditory apport as well as the absent transmitting mediums. It’s a very smart show, and the Brazilian material is especially engrossing. Don’t miss it.