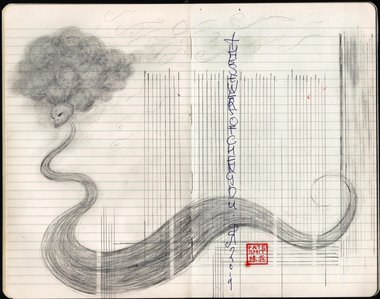 Frank and Yves are LA-based, surviving in the gig economy, surfing the social media wave, living across art's ever expanding field and travelling whenever possible—in recent years to Peru, Indonesia, Scandinavia and Inner Mongolia, including a 2018 residency at the Dunedin School of Visual Art. Early 2019 they travelled to Chengdu, plugged into the local art networks and got themselves onboard 'Up-On', subsequently negotiating festival time in a stunning and very large white cube space inside one of Chengdu's many new private art museums.

He smeared a filthy paper on the ghost’s mouth. The spectre belched, uttered frantic roars, and disappeared knocking over the candle. And since that day it has never been seen again.
- “The Ghost in the Privy,” from Notes of the Yueh-wei Hermitage

Called the Cloudy City, Chengdu in south west China is a teeming, sprawling, traffic-jammed megalopolis of 15 million souls or so. And that’s just the living ones. In no other city—Roma, Berlin, London, Chicago—have the dead haunted me as much as they did in Chengdu. Not the named Ancestors, whose graves and tombs are annually cleaned, but the Anonymous Dead, the lost tribes, nameless slaves and peasant labourers of Dynasties, the disappeared, the war, flood and famine victims, the long forgotten animals of the vast Sichuan Plains. Toxic, fire walled, Haussmannised, high rised, ring roaded, hub-and-spoked, securitised & surveilled—Chengdu comes on like a necro-political space par excellence. As if one has been dropped down in the Impersonal Zone, fallen to the lowest level of a labyrinthine & spectred world, all zero intensity inside a capitalist Nowheresville with Chinese Characteristics … Distant rooster crowing—calling back the departing ghosts—I awoke early on my first morning jet-lagged and way down, realising instantly that I’d entered a time out of joint marked by some hyped-up awareness of Death. The desire to draw was overwhelming.

I was in Chengdu at the behest of friends and collaborators Frank Fu and Yves Gore, aka the Cosmic Twins. They were taking part in an autumn performance art event there named Up-On: 7th International Live Art Festival and had suggested I come join them … O to be in China together after all these years! Why not? Frank’s parents were there as well, driven thousands of kilometres from the port city of Dalian on China’s north east coast to see Frank and Yves, meet me (“Teacher”) and help out with the shopping and cooking, transport and logistics. For near on a month the five of us cohabited a Xiaozhu-rented (China’s Airbnb) apartment, 4 bedrooms, 3 bathrooms, living area with big screen TV, kitchen, rooftop courtyard, 3 balconies, 17 floors up in a beautifully run down compound of 90s apartment blocks: Southside, gated, working class.

Frank and Yves are LA-based, surviving in the gig economy, surfing the social media wave, living across art’s ever expanding field and travelling whenever possible—in recent years to Peru, Indonesia, Scandinavia and Inner Mongolia, including a 2018 residency at the Dunedin School of Visual Art (1). Early 2019 they travelled to Chengdu, plugged into the local art networks and got themselves onboard Up-On, subsequently negotiating festival time in a stunning and very large white cube space inside one of Chengdu’s many new private art museums, itself situated in a large faux-Florentine hilltop & flatland enclave named Lushan-Luxe Hill.

In the days and nights before Up-On‘s official opening we set up a rambling installation in the gallery space, as if a theatre with props, or a film set, inclusive of different zones in tension, with some intended as specific performance sites for the five parts (attraction), and others as connectors or sub-zones (interchange). Adhering to certain aesthetic principles—e.g. full-empty, visible-invisible, separating-gathering together—Frank wanted the installation to be “self-regulating,” a living diagram/map of the Great Chaosmos itself. In the first zone of attraction, a stack of red bricks, bottles of black ink, white porcelain bowl, big Chinese brushes and sheets of aged rice paper. The second zone was almost void, a section of white wall marked by a leaning bamboo pole. In the third, a large low table constructed with brick supports and white coated plywood top with scattering of silicon moulding/casting paraphernalia + concave mirror. In the fourth, a small low brick “altar” with glass electric kettle, bowl of uncooked rice, various cooking utensils, jugs and jars + more rice paper spread on the floor and taped to a wall.

One sub-zone held a 2xmetre high circular bamboo pole construction, a kind of pavilion with draping coloured cotton walls, scattered floor cushions and clip boards with audience questionnaire concerning anuses and bowel habits attached. In another, a collection of small 80s video cameras + packets of tapes were laid out in a row on the floor, and nearby on a small rickety table an old cassette-type tape recorder played some crackly monologue in Chinese. Various Penjing (Bonsai) and assorted bamboo poles were placed on the floor here and there throughout the installation. On a cornered section of wall, a series of printed-out A4 colour images recording the last two weeks worth of Frank’s daily shits, dated.

Face like a Noh mask, barefoot, long flowing black hair, dressed in white = death in China, at the appointed hour Frank proceeded. Each day a different ordeal in extremis. Theatre of cruelty difficult to watch: sorcery + neurosis + psychosis + perversion … Crawling around licking black ink onto red bricks, retching in agony. Slowly and repeatedly beating his buttocks with a bamboo pole, until collapsing. Moving around on the large white table making moulds & fluoro-pink silicon casts of his penis. Pissing in a jar, cooking rice in the urine, slowly and serenely eating the resultant gruel. And on the final day, violently defacing and destroying the entire installation then stripping naked and kneeling on the floor in foetal position, his badly bruised buttocks exposed to the audience … Sometimes I misrecognise myself in the mirror of action, and this especially so if the mirror happens to show obscenities. Nevertheless, taking on the shame of being human is a task of art. The Single Lens Reflexives and smartphones clicked, clunked and flashed. FATE SHIT mantra: One Performance Artist, 77 Cameras.

By the end of the festival’s wild wind-down party I was badly hung over & exhausted. Sitting with Frank outside an emptying BBQ restaurant on a long main road, sipping cold beer and chain smoking apple-flavoured cigarettes, the surrounding neons and orange street lights eerily halloed in mist, I felt too much of a 4am old dog (Cynic) to keep on keeping on with the 100% positivity machine, the never ending Programme Notes from an Artificial Hell. (3) Had I ever been young enough? Frank was still on art-adrenaline and talked of coming things, of his and Yves’ next projects, their travel plans, but I had Zoned-Out. We walked the few blocks to the apartment complex. The security guard at the gate was dozing in his booth so we walked on through, entered our building and rode the lift to the 17th Floor, soon to our beds. Distant rooster crowing—calling back the departing ghosts—I fell into dreamless sleep. Beautiful schema of death.

On our last day in Chengdu we visited Renowned Process Sculptor Dude, real name Li Yongzheng, way across town at his studio on the 5th floor of a tall glass-curtained office building in one of the city’s new Commercial Zones. Once upon a time Yongzheng had made big raw oil paintings, what he now calls his “secrets”, German Expressionism + Basquiat + calligraphy. For the last 20 years, however, it’s been a very public flow of installationism + conceptualism + Internet Fluxus + mutual aid + youth clubs + abandoned nuclear testing sites + Himalayan salt bricks + water metal fire + air pumps + printing presses + surveillance state + Affective Efficacy—the studio was overflowing with the most remarkable stuff. Yongzheng made espresso, passed round cigarettes and the afternoon got lost in idle talk, Tom Verlaine’s Songs and Other Things playing softly on repeat: I liked Yongzheng a lot. As we were leaving he gave me a copy of a recent monograph. Later that evening, on page 277, I found this:

Death Has Been My Dream for a Long Time

Description: According to media reports, on Jun 9, 2015, four children committed suicide in Cizhu village, Qixingguan District, Bijie, Guangzhou. Of three sisters and one brother, the older brother was 13 and the youngest sister 5. On June 12, media revealed the oldest brother Qi Gangliu had left a suicide note. The letter said, “Thank you all for your concern. I know you mean me well. But I have to go. I promised I would not live beyond 15. Death has been my dream for a long time. Today I come clean.”

I array salt bricks from the Himalayas along the beach in Tanggu, near Tianjin. I arrange them so that they read, “Death has been my dream for a long time.” The incoming tide quickly dissolves the bricks. The salt returns to the sea. (4)

The sea, the return, writing and death: in the silence of my room Yongzheng’s text instantly resonated. With process art (but isn’t all art process art?) everything is doubled, twice. In other words, everything repeats but with a difference. Hence the event of the children’s tragic deaths develops on two planes, planes echoing but not resembling each other: on the first, as corporeal event i.e. the poison spreading in the children’s bodies, the real; and on the second, as ideal event i.e. the suicide note expressing Qi Gangliu’s dream, the media reports, writing. Yet by shape-shifting this already doubled event into an artwork Yongzheng redoubles it: first, as commemoration or witnessing, a reconnection with the socio-political field whence the event arose; and second, as “counter-actualisation”, a rendering of the event so as to become what it was not. (5) A setting-free of the event, its liberation, the repetition of that which by means of its always irreducible difference constantly returns and thus constantly reaffirms and re-potentiates all that changes, all that endlessly escapes and yet continuously floods back, even here—precisely here—on the beach in Tanggu, near Tianjin. 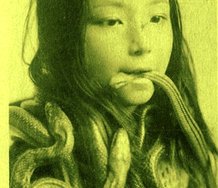 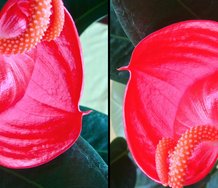 Inbound on the Western Line 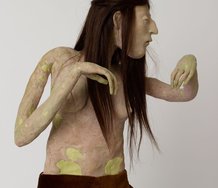 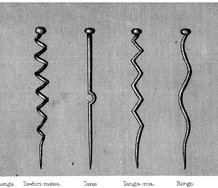