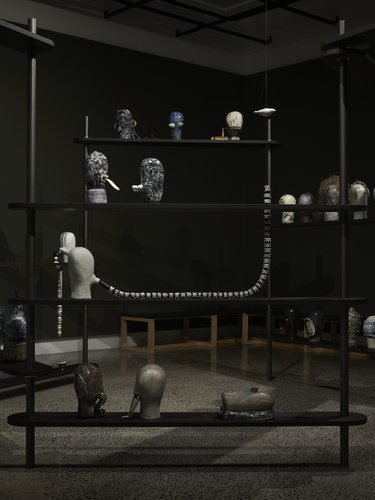 The big surprise in this show is its emotional temperature—its agitation-generating properties—a histrionic stridency that is extremely rare for Morison: one that is cleverly exacerbated by the aural involvement of John Chrisstoffels and his penetrating theremin soundtrack, plus a dark theatrical setting that is immersive.

In this Objectspace iteration of Julia Morison‘s recent large Christchurch Art Gallery show (also going to Whanganui), North Islanders can look at her kiln-fired sculptures en masse, a hundred heads presented on a specially designed set of hexagonally-positioned shelves that as floorplan allude to a honeycomb; ascending and enlarged flat ‘TT2 sticks’ organised by airborne apiarian architects. The exhibiting space is a little smaller than it was in Christchurch, the installation this time on a polished aggregate concrete floor and pushing the viewers closer towards the outer dark grey walls.

Thinking of Morison’s long exhibiting history, we see the ideational fusion of the bodily playfulness and humour of Decan (1988) and Golem (1987), with the tubular linkages and faux scientism of the amazingly inventive Gobsmack and Flabbergast (2005). These hybrid references to earlier series are formally embedded within the visual merging of the supporting base structures of the Tree House sculptures (2013) with the cranial forms of Headcase (2015)—based on a hat-maker’s mould—and orifice-blocking elements from Accessories for a Soft Machine (1984). Morison has a complicated and varied exhibition history.

Many of these extraordinarily diverse works are overtly ornamental and highly appealing, but within the decorative ‘craft’ conventions of ceramic glazing methodology, and not the ‘clean’ modernist patterned (and computer-assisted) rhythms of what I personally consider to be her most supreme achievement, the ever-rippling, ever-undulating Gargantua’s Petticoat (2005).

The big surprise in this show is its emotional temperature—its agitation-generating properties—a histrionic stridency that is extremely rare for Morison: one that is cleverly exacerbated by the aural involvement of John Chrisstoffels and his penetrating theremin soundtrack, plus a dark theatrical setting that is ominous. (With its single entrance—in a packed opening on a wet winter’s night—Objectspace can be hugely claustrophobic anyway.)

The horror of Morison’s referencing of severed heads has already been very ably discussed previously in EyeContact by Allan Smith, but this installation takes such intensity further, due to the grey walls and the immersive cavelike ambience, and also because of Morison’s use of fetishistic materials—often not normally associated with clay—that work on a level beyond merely what body parts they describe.

In other words, they as substances with qualities—in their own right (beyond representation)—are ‘alive’ and scary. Sharp, jagged and spiky properties are juxtaposed with the soft, woolly and long, yet there is much humour (both black and gentle) too. Quivering primal terror and convulsive belly laughs go side by side.

Concept-wise the show is an extrapolated turning-over of Morison and Martin Grant’s Ernst-inspired Material Evidence:100-Headless Woman Govett-Brewster exhibition (1998) of outrageous dress-sculptures. It is more ‘Material Evidence: 100-Bodiless Woman,’ although many of the heads here are ceramically made up of compressed body parts found below the neck—such as breasts, hands, buttocks, knees, elbows, shoulders, anuses, feet, intestines and groins—as well as extra facial or head bits.

The sculptures are sorted into different groups according to colour, texture, and other formal properties. Unexpected materials (like horse-hair) are incorporated into the ceramic forms. Some heads tower high above the visitor.

Head[case] has an exciting 144 page catalogue published by Objectspace, containing superb images of the Christchurch hang by CAG photographer John Collie—and with each individual work documented. Inside are also two informative essays by Kim Paton and Anna Smith that take the work’s discussion in very different directions. Objectspace Director Paton looks at the ubiquitous ‘art’ versus ‘craft’ rivalry and its unceasing politics, her very amusing title (‘On the Side of the Monster’) referring with irony to her role as apologist for Morison the artmaker in this space.

Smith on the other hand does a Marina Warner-style examination of Greek mythology, mixing it with Deleuze and Guattari—eloquently looking at Sibyl, the oracular goddess of poetic frenzy and how she might be a template for Morison. the decapitator and dismemberer:

This Sibyl whose fascination with body parts and material forms has led her to freight them with echoes of sense and traces of residual meanings, speaks to the unpredictability of events that bear down on the thinking, feeling bodies we inhabit—that inhabit us—and tear them apart; putting together again being less Morison’s business than capturing things on the edge of falling apart.