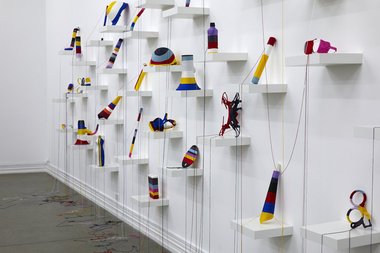 Tan's exuberant endorsement seems to point to colour as a symbol for raw emotion that in its happiness clouds over the functionality of prosaic items, merging or blending them into the cause. Their identity changes. Individuality and utilisation dissolves and morphs into a wider community entity that has long term aims.

It is many years since Yuk King Tan last had a solo show in Auckland—she used to be represented by Sue Crockford—so this Starkwhite presentation of three installations and a video is a welcome event.

Two of these large works involve thread wound around objects (or glued on to craggy forms) placed on the walls and then left cascading down to the floor, often to become intermingled and tangled—a method she is well known for. The other is a curtain made of translucent plastic cable-ties and handcuffs, interlocking black and white nylon loops commonly used by police and military as restraining devices.

The Crisis of the Ordinary wall work is a colourful celebration of the prodemocracy protests being held in Hong Kong (where the artist lives) and elsewhere. It is a theme she has often explored in the past, particularly in Wellington in 2005. The associated (now ‘disguised’) objects—such as gasmasks, batons, handcuffs, loudhailers, periscopes, drones, helmets, water bottles, cameras, canisters and books—are placed on forty small white shelves projecting out from the wall. The horizontal bands of varied colour suggest multiplicity and with their delicately descending vertical single threads, have considerable visual impact, while the entangled threads on the floor suggest a monism where police and protestors blend—and opposing binaries collapse.

Tan‘s exuberant endorsement seems to point to colour as a symbol for raw emotion that in its happiness clouds over the functionality of prosaic items, merging or blending them into the cause. Their identity changes. Individuality and utilisation dissolves and morphs into a wider community entity that has long term aims.

Eternity Screen—the zip tie and plastic handcuffs curtain—is much much creepier, a symbol for repression and authoritarian control—the power of the police state. Its sinister mood is a vivid contrast. Yet this is a beautifully constructed barrier that is easy to look through and has all of the patterned intricacy and infused light of a latticed Muslim screen. With its methodical grid and undulating arabesques, it is gorgeous and terrifying as well.

Yuk King Tan‘s Nine Mountains is an image of nine crystalline peaks that seem to have white rivers pouring down their sides (like Judy Darragh’s wonderfully dubious ‘milk’ posters of the mid-nineties) tumbling to the floor only to then spread out. They have that angular prismatic feel so typical of Chinese representation of mountain tops in scroll paintings. However the overall effect is calming, through the gently descending rhythms and gradual attainment of horizontality. Their chromatic understatement induces relaxation.

This is a carefully organised exhibition where the three main works shunt you through contrasting moods: joyful exhilaration; fear; and serenity. You feel jostled and slightly battered about. This is a skilful well-orchestrated manipulation aimed at a New Zealand audience, not say a Chinese one—for the emotional impact of colour is culture-specific. Red is usually the single colour she focusses on; this time it is white. In China white is associated with death, but here it is linked with stillness and quiet. So different.