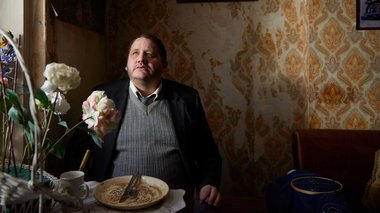 Most of us usually make a long list by perusing the catalogue, whittling it down to a more manageable (less expensive) short list, and then talking to friends or doing Google research to make it longer again: back and forth concertina style.

With almost 150 films to pick from, and most hardcore cinephile fanatics rarely seeing even a sixth of them, it has been an intensive eighteen days (as is usually the case). Most people who attend have their own individual array of passions through which to filter their personal selections—depending on the communities they are part of—and so there is little overall consensus on ‘sensible’ choices.

Most of us make a long list by perusing the catalogue, whittling it down to a more manageable (less expensive) short list, and then talking to friends or doing Google research to make it longer again: back and forth concertina style.

As you might expect, I was very excited to be able to see a bunch of superb films about artists (Escher, Christo, Peryer, Lowry), some by artists (Billingham), and others about current global art themes (Pemberton / Piketty on capitalism’s history, Leigh and Loach on class oppression, Varda on poverty and sexual hypocrisy; Kossakovsky on climate change; Tyrnauer on Roy Cohn, the ghastly mentor of Donald Trump).

Plus there were other great productions on related themes (Assayas’ gentle satire on Parisian publishing; Denis on punitive trans-generation intergalactic travel; Lane on Christian-baiting; Garver on film criticism; Strickland on garment fetishism; Costin on the history of cinematic sound construction; Derham on the artistic aspirations of taxidermy).

And of course one can’t ignore the great music movies (Davis, Franklin, Cohen) that were incredibly popular—and rightly so.

However it is the moments of magic or revelation in certain works that one quickly remembers, certain scenes like Mike Leigh’s caustic caricature of the Prince Regent (Tim McInnerty) in Peterloo, that extend the gloriously vicious tradition of Hogarth, Gillray, Rowlandson and Cruickshank. Or Agnes Varda’s moronically self-obsessed husband (Jean-Claude Drouot) in Le Bonheur who believes that wives are easily replaceable as caregivers for his children, that adultery can occur without consequences.

Richard Billingham’s Ray and Liz is a terrific film about the artist’s parents, a brutal look at parental neglect, alcoholism and poverty. It has a mesmerising scene where the evilly mischievous lodger (Sam Gittins) cons the mentally disadvantaged brother (Tony Way) of Ray (the main character) into getting paralytically drunk in the parents’ absence when he is meant to be babysitting. It is very scary (he gives a carving knife to the child) and perversely funny at the same time.

Also about working class tension, and an English family’s struggle to fiscally survive, Ken Loach’s Sorry We Missed You is set in Newcastle, and about desperation on the part of the parents to earn the money necessary to support themselves and their two kids, one of whom is getting insolent and unmanageable. Although the main character is the husband with his problems with a bullying courier company manager, his wife Abbie is a compassionate in-home daycare nurse, looking after old people. She (played by Debbie Honeywood) is overworked and stressed.

There is one extraordinary scene where an old lady, one of her clients, brushes Abbie’s long blonde hair while singing her an old folk song, helping release the stress. It is an extremely poignant and beautiful moment that is unexpected. I had no idea Loach could be so lyrically powerful in a non-obvious, not-heavy-handed way. A wonderful surprise.