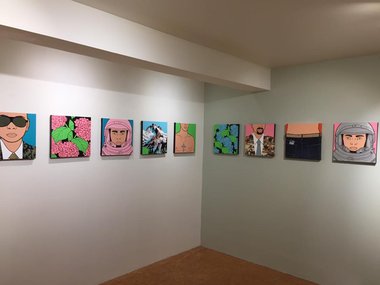 Subterfuge, disguise, discreetness and secrecy still have to operate among men who negotiate this marginal world after dark, or during daylight hours, courtesy of social media and their various dating sites. One of them is affectionately and unapologetically known as “Grindr”, the largest social networking app for LGBTIQA+ people.

In today’s more enlightened world, biblical fundamentalists apart, the gay community can rest a little more easily in a society that has come to embrace diversity and have done with the Devil and Dante’s Inferno. However, as Hamilton artist, Mark Curtis, in his latest show at Freit Contemporary Gallery, Frankton, has pointed out, things are not quite so simple inside the homosexual fraternity.

Subterfuge, disguise, discreetness and secrecy still have to operate among men who negotiate this marginal world after dark, or during daylight hours, courtesy of social media and their various dating sites. One of them is affectionately and unapologetically known as “Grindr”, the largest social networking app for LGBTIQA+ people.

This free or subscription-based version taps directly into smart phone users with its displayed grid of photographic portraits, employing geolocation and conveniently arranging subscribers from nearest to furthest away. Touching the picture brings up a profile and options to chat and share precise location.

And it is the scenario surrounding the photo grids that Curtis has explored and played with in his 54 mixed media works that depict images of young men in various guises. Or should that be disguises, because for the most part the photographs displayed on the app have the identities of the people invariably camouflaged, concealed or cloaked in various ways.

The reason for such subterfuge comes down, in many cases, to a desire not to be outed. The participants might be married men, or men in positions of power, profile or influence who live in communities or countries—there are 4 million uses of this app from 196 countries across the globe—with less liberal attitudes to the gay lifestyle.

Curtis in his series of small paintings/prints, plays with that reality, presenting his singular protagonists sometimes cropped so only half the face is showing, or wearing large reflective shades, or more outrageously, togged out in a World War One gas mask. He has lots of fun together with subtle citations with his masks and masquerades. One of them presents a cropped figure wearing a singlet patterned with a military camouflage design in pink, white brown and black colours, recalling Andy Warhol’s self-portraits. Another wears an astronaut helmet. Major Tom makes a reference to the recent moon landing anniversary as well as a direct allusion to the bisexual David Bowie.

In a personal touch, Curtis cut up one of his old shirts (printed with macho cowboys corralling cattle), and pasted it on one of his figures to create a besuited tie-wearing gentleman. Collage also operates in other works, most notably in one where a plastic toy figure of a male lying on an inflatable lilo is fixed to the canvas.

The funniest would have to be a work entitled, Izzy Wizzy, a well-endowed young man of brownish complexion, sporting a chain around his neck with an ornate crucifix dangling down his buffed and naked torso; a frisky allusion to anti-gay campaigner, Israel Falou.

In this clandestine world of camouflage and secrecy, code operates as another form of disguise, and this plays itself out in practice by older men who use images of flowers instead of themselves as a ploy. Blue Hydrangeas is a fine example, a hedge of leaves and blooms to hide behind. Having employed glitter in former works, the artist incorporates elements of it here as both a decorative and delicious camp device.

Curtis also has a gay time with his titles. One of them, Hey Hey, is the preferred greeting used by men in their initial communication. But the appellations get a little more racy further down the list: Fun Now, Fluffy, Speedo Boi right through to Juicy Ass.

All the figures have a Pop Art aesthetic with flat and highly coloured backgrounds, employing a simple hard-edged black line to delineate the forms of faces and bodies that possess neither depth nor shading. They come clean, sharp and exuberantly precise.
This is an entertaining and exuberant exhibition: part playful, part poignant and perfectly crafted.