Releasing the Benefits of a Wild Imagination 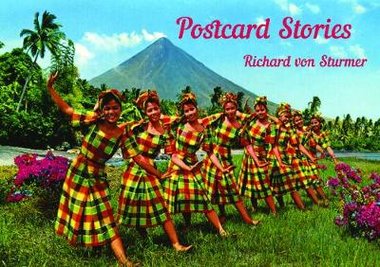 While you are examining the images, and perhaps looking up their locations and subject matters at the back of the book, von Sturmer is insisting with his choice of words on a suspension of belief, and the primacy of the human imagination. In fact he seems just as surprised (and excited) with the text as you are, delighting in the unpredictability of thought, even when it clings to a generating visual logic, demonstrating too that he is superbly good at controlling emotional tone and fluidly flowing narrative.

This is his eighth book. It’s an elegantly organised and colourful publication where he uses found postcards to prod his own authorial imagination, and the reader’s too. The sumptuous but antiquated images can be enjoyed co-ordinated with the carefully positioned (meticulously constructed) texts, or the two can be separated out (removed from their sequences) and savoured in isolation. However the images are chosen to resonate in groups of four, and these sets spark off the writing.

Structurally we find von Sturmer’s postcards and texts are divided into two sections—featuring poetry (from four card sets) or prose (generated by single cards, that are often historical elucidations)—plus at the back is a list of locations (taken from the backs of the postcards) to tell us a little about the image origins.

Most artists enthuse over old postcards—along with say paper maps and comics—(I, for example, am a John Stezaker and Malcolm Morley fan: I’m intrigued by what artists do with these things) so it is fascinating to see von Sturmer’s take on these commonplace (here often handtinted) artefacts. Aside from his creative predilections in terms of writing, in his introduction he mentions some categories of postcard: bad (counterproductive to the aims of their producers); boring; uniquely inspiring through unusual individuality; and potentially reverie inducing—an otherworldliness. Often his ‘translations’ show an interest in science-fiction.

With each of the sixteen story-poems, von Sturmer uses two double-page spreads to inspire four verses linked by narrative: three four-lined verses followed by one of five lines. He puts a bit of extra muscle in at the end—for emphasis through added cadence.

Sometimes the words (eg.#12) surprisingly seem to allude to late sixties pop music (Simon and Garfunkel’s America—on their Bookends album—or perhaps Joni Mitchell’s Big Yellow Taxi). Other times von Sturmer quotes a sentence found on the postcard itself to get things rolling. For example, started by a text imposed over an image of waves crashing on a beach, Story #4 goes:

The sea
in all its vague immensity
takes away words
leaves behind stones.

Diamonds can’t be found
in the quiet earth.
You need to search for them
near volcanoes.

Birth is mysterious,
death is the same.
Hot vents through which
we come and we go.

The inexplicable
about to be explained…vanishes.
There’s just the beauty
of prime numbers,
the multiplication of arcs.

Above the third stanza is an image of a young Māori boy soaking in a hot rock pool, and above the fourth some coastal rock formations in Ireland where the sea has eaten through to form dramatic arches. The line ‘multiplication of arcs’ reminds me of Sol LeWitt drawings, in his books and on wall drawings, of calibrated curves, elegantly sweeping arcs.

Another story (#7) starts with a desert scene of bright ‘blood’ red flowers—called Sturt’s Desert Pea—that look vaguely like crablike creatures with piercing black eyes living under paper lanterns. These ‘aliens’ von Sturmer skilfully knits into a narrative that pulls in all four images, recontextualising postcards from Australia (Adelaide where these flowers are a state icon), Italy (some ornate buildings in desolate Bergamo where no life is aparent), more Italy (a room of painted Renaissance maps in Florence where there is a giant globe) and Finland (Helsinki, where there is hideous modernist monument honouring Sibelius).

When the aliens landed
it was a hot day
And the air was filled
with the sound of cicadas.

By twilight it became clear
that the humans had gone.
Only their monuments
were left behind.

From deep in space
they believed the earth to be
a most orderly planet
filled with promise.

But on the ground
they now sensed
a growing discord,
and painful vibrations
sent them back to their ships.

While you are examining the images, and perhaps looking up their locations and subject matters at the back of the book, von Sturmer is insisting with his choice of words on a suspension of belief, and the primacy of the human imagination. In fact the excitement within the writing makes von Sturmer seem just as surprised with the text as you are, delighting in the unpredictability of thought, even when it clings to a generating visual logic, and demonstrating that he is superbly good at controlling emotional tone and fluidly flowing narrative.

This is a funny, thoughtful, and sensual book, an unusual publication where the writer holds out a series of mental hoops for the reader to jump through. What is photographed as a memento for tourists is transformed by verbal declaration into something unexpectedly different, and (in the—more extreme—Rauschenberg ‘Iris Clert’ or Michael Craig-Martin tradition) it makes you willingly see it through the author/artist’s eyes: afresh and revitalised.