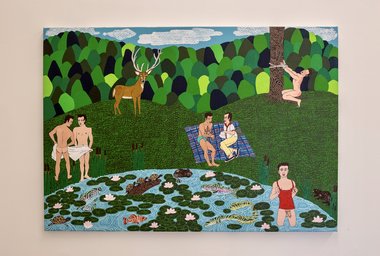 There is also a rich lushness in these works, particularly in the Still Life paintings, crowded as they are with oversized flowers that remind one of the French naïve artist, Henri Rousseau. But Williams' colours are brighter, more vivid. They do at times verge on prettiness, though there are suggestions here of it being consciously twee.

America and France have traditionally been recognized as the native home of the naïve artist. In nineteenth century America, perhaps the most famous of these was Edward Hicks (Quaker preacher) and his astonishing series (100 in total) depicting the vision of America as the Garden of Eden. It was where the lion and lamb lie down together with a little child somewhere in the mix. These Peaceable Kingdom images were placed solidly inside the American landscape.

New Zealand naïve artist, Laura Williams, has just returned from a residency there, (New York’s Hudson Valley with ChaShaMa), bringing back several works inspired by the experience. These, along with others, are currently on show at Weasel Gallery, Hamilton.

New Zealand does not have a strong tradition of the self-taught artist, certainly not ones that figure in the literature, or at least not contemporary ones, albeit with a few exceptions.

The Messenger Sisters, (Jane, Mary and Louise), and their naïve rendering of their mid nineteenth century homestead in Taranaki, (1857), an oil on board depicting the cleared New Zealand bush and mountain in the background, is a particularly appealing example that features in the publication Art at Te Papa. Another is Yvonne Coleman who is in the Govett-Brewster Collection and admired by many contemporary artists like Michael Stevenson and Dick Frizzell. Margot Philips in Waikato is another example.

The naïve style, or elements of it, given a sophisticated modern twist, can perhaps be detected in the later works of Frances Hodgkins. Richard Killeen’s Street Corner, 1969, does faux naïve, and Saskia Leek and Tony de Latour’s early material did the same.

But beyond that, the true untutored artist goes under the radar and undocumented here. Such marginalization is a shame.

In the Hamilton show, Williams presents four different areas of focus that come under the generic headings—Still Life, Bedroom series, Subverted Garden of Eden and House Residency, all of which are treated in her inimitable style. This comprises carefully executed layers of paint, the use of bright colours, the practice of lined contours, stylized figures and the employment of dashes and dots, particularly in her rendering of grass.

The latter is a crude pointillism, eschewing the subtle variety invented by Seurat, but nevertheless effective and visually beguiling. Williams’ notations are carefully plotted, but stark contrasts predominate with abrupt shifts in palette. Nevertheless there is an engaging charm in the bluntness of these tropes which contribute to a sharp clarity of image and stark directness of form.

There is also a rich lushness in these works, particularly in the Still Life paintings, crowded as they are with oversized flowers that remind one of the French naïve artist, Henri Rousseau. But Williams’ colours are brighter, more vivid. They do at times verge on prettiness, though there are suggestions here of it being consciously twee. While a plethora of colours is employed, the extravagance of these flower motifs does bring to mind the celebrated French self-taught artist Séraphine Louis, but without the religious intensity. Fantasy, caprice and whimsy luxuriate in these swollen, spouting cornucopias of petals.

The best of these is where the palette is deliberately limited, the colours more muted, and the figures in them a little more enigmatic. But in all of this there is a perceptive playfulness at work where art historical allusions are employed and comic turns are invoked.

This is particularly evident in the Subverted Garden of Eden series. Dutchess County Picnic is a prime example. Here she is having enormous fun. In a sylvan landscape, complete with pond, a stag, with impressive antlers, looks impassively on a scene that involves various pairs of gay men doing updated versions, or at least sly references to Manet’s Picnic on the Grass, Antonio Canova’s The Three Graces, and Spoils to the Victor by Louis Jon Steele.

This garden is stacked with testosterone, complete with exposed male genitals and a phallic eel plying its way in a lily pond. The phallus is in fact everywhere—in the erect reeds that surround the lake’s perimeter and in the knob-like trees that form the backdrop to this Eden. Jehovah would not be pleased.

The ‘subversive’ sexual romp continues in the Bedroom series, and Nice Drapes perfectly captures the comic tone. Two figures are blatantly depicted in the act of sexual congress, but the title draws our attention to the abstracted patterns on the curtains that hang in the room. Nice: Eden, twenty-first century style, complete with tasteful fittings and fixtures.

The floral theme has a definite folk-art touch in Serenity where a profusion of flowers spills out of an objet d’art vase, sporting Amish-type figures frontally configured. The vase is positioned on the corner of a round table, itself covered in a flowery ornamental cloth. The decorative is laid on quite copiously, but what saves the painting is the inclusion of a tacky op shop ornament—a mermaid, doing perhaps a crude imitation of The Birth of Venus. Fecundity in overload with a hint of parody.

It will be remembered that the German artist, Gabriel Münter, companion of Kandinsky, also incorporated folk-art objects into her paintings, but Williams seems to do so for certain referential or burlesque effects. This is particularly evident in the work, Demise, where she has included an image of a ceramic knick-knack that alludes directly to Rousseau’s The Sleeping Gypsy. The artists’ world is one where man and wild beast seem in pleasant concord, though we have to take these dreams with a pinch of salt while at the same time recognizing that the use of low-rent ornaments is all part of the artist’s appealing routines.

Spruce Farm Flurry is one such work, painted during the residency which depicts the actual building the artist stayed in. Even here, in schematic fashion, she presents a kind of Edenesque atmosphere where the squirrel and coyote seem in harmony under a canopy of stylized leaves.

This exhibition is full of vibrancy, clever allusion and comic twists that delight both the eye and mind. A visual feast presented by a naïve but knowing artist.