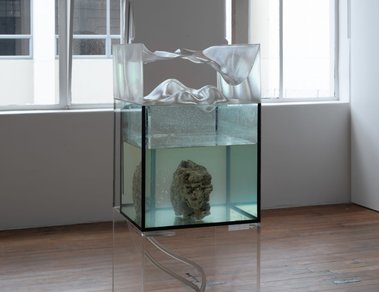 There are four works in this exhibition, three freestanding ‘tank' sculptures upstairs and a two part (spatially separated) slide projection downstairs. Frater's use of aquarium tanks goes back to his early films demonstrating corrosive processes with dissolving grids. It ties in with a hermetic tradition started by Hans Haacke, and contributed to by Jeff Koons and Damien Hirst.

Richard Frater is remembered in Auckland for the shows he had in Newcall gallery around the end of the first decade of this millennium, with contemporaries like Patrick Lundberg, Richard Bryant, Sarah Rose, Roman Mitch, Anya Henis and John Ward Knox. His work was often cut and shaped pieces of plain carpet  carefully positioned on the floor. He showed some of these in Te Tuhi.

Over the last ten years his film projects and fishing-lure (or nail/needle) wall sculptures have appeared very spasmodically in group shows at the Michael Lett Gallery, and he once had a wonderful film installation at Sue Crockford‘s. He was also in a survey of A Centre For Art that Peter Shand organised for the Gus Fisher.

Indifference is Frater’s first solo show for Lett. It focusses on ecologically themed work he has made while studying and living in Berlin and Glasgow—and continues some of the conceptual threads he started to explore in an Adam Art Gallery show, Living Cities 2011-, curated by Laura Preston.

There are four works in this exhibition, three freestanding ‘tank’ sculptures upstairs and a two part (spatially separated) slide projection downstairs. Frater’s use of aquarium tanks goes back to his early films demonstrating corrosive processes with dissolving grids. It ties in with a hermetic tradition started by Hans Haacke, and contributed to by Jeff Koons and Damien Hirst.

These are visually intriguing objects like his earlier wall sculptures, but not only bigger but also about metabolic or biological processual systems, not poetic allusion or evocation. While they are about information, they are not semantically compressed in their allure like the much earlier, slightly surreal, wall sculptures, as three-dimensional items to contemplate. Both sorts however have a vertical compositional stacking structure.

Stop Shell (live rock version), 2019, is the first work you come to. It is close to the Lett gallery entrance. It demonstrates over the duration of the show a reversal of coral bleaching and rising water temperatures, so that bacterial coral organisms introduced into the circulating water gradually start to re-establish themselves in a chunk of fossilised (obviously dead) coral. Coral bleaching had occurred when rising temperatures caused the coral to expel the algae living inside. Frater wants to get the water and coral living again.

On the top is a three dimensional graph of global environmental patterns that mimics the ocean floor and rolling sea currents. It could be rippling carpet.

Stop Shell (oyster filter version), 2017, is in the middle of the room. The circulating water is filtered through a common domestic water filtering device and a live oyster positioned in a clear plastic jug at the top so that it becomes cleaner, bluer, and toxin free. The colour change in the water over a month is detectable.

The title of this series admonishes Shell oil company’s proclaimed aims to set up artificial reefs of oyster to help clean up the Gulf of Mexico. Frater believes that there would be a negative side effect, that the result an excess of CO2 in the water that will lower the pH levels in the ocean damaging the calcification of coral exoskeletons and oyster shells. The added presence of a dead oyster shell in Stop Shell (oyster filter version) reminds us of this potential harm.

Stop Shell (Ghost fishing version), 2018, shows where Frater has ironically converted abandoned plastic nets and bits of plastic detritus into a soft funnel-like fish trap placed in a tank half filled with stationary water. Frater here is metamorphising materials in a manner like that often seen in the practices of artists like Cornelia Parker and Simon Starling: the transmutation of objects. A total physical transformation.

Downstairs, Social Cryptomnesia, 2018, uses photographs Frater himself has taken in Germany of a colony of goshawks living in a forested park in Berlin. These images he has sorted into two, very different, sequencing systems.

This goshawks project is linked to the earlier 2015 Adam show (Living Cities 2011-) where kaka from the Zealandia reserve LINK STUFF are discovered eating lead nails and flashing in old buildings, and poisoning future generations. Frater is interested in how wildlife adapts when forced to co-exist in close proximity with humans—what the consequences are.

The photographs don’t come to any conclusion but they look at human patterns of thinking and the nonchalance of observed ‘nature’.

Frater’s structuring of his image selections is in two forms: one set is chronological in its sequencing and presents conventionally composed, balanced bird portraits that avoid signs of human intervention or presence; the other is of lopsided images, signs of ‘unnatural’ human presence (like background houses), and shots with detail that lingers around the edges of a compositionally ‘empty centred’ frame. The latter is occasionally mixed in with a vague narrative that is humorous at times. Sometimes we see scientists. One is banding chicks; another has rings in his ears.

Indifference is a fascinating exhibition, but because it is about instructional information that is global in impact, it doesn’t have the gentle intimacy and poetry of his earlier (smaller) wall sculptures or film installations (with pillow slips)—which I miss. Functionality and directed purpose have replaced mystery, but there is a continuing structural thread. One can see that these aspects are all interwoven, and that parts of Frater’s earlier practice (like his films) are on some levels organisationally consistent with what he is doing now; resonances echoing the past still detectable.