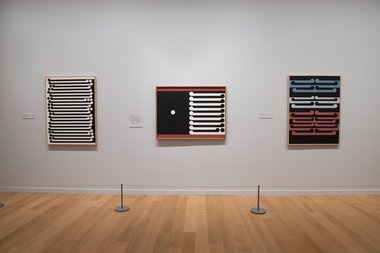 The funny thing is that although Walters wanted his formally organised paintings to be enjoyed solely for their visual and compositional attributes—the koru paintings for example were not to be seen as depicting plant, wave or cloud forms—the scholarly information in this show about sources of inspiration undermines such purity. You start to see tattooed heads or ancestral bird figures even in rigorously geometric rectangles.

In this large, complex but carefully organised, survey of possibly New Zealand’s greatest modernist artist, the main channels for Gordon Walters‘ formalist exploration are set out in a spectacular fashion, showing how he was inspired by certain Māori motifs (koru bulb forms and ancestral rock drawings), and the decorative design features of other Pacific Indigenous peoples, along with European (occasionally American) methods of image construction, and how over five decades he managed to blend the different streams together.

His areas of research were hugely varied (about twenty types of image, each type explored over several decades) and were often linked to his passion as a young artist for Surrealism—this continuing late into his career with the ‘mise en abyme’ series—filtered through the insightful drawings of Rolfe Hattaway, whom Walter’s friend and teacher Theo Schoon discovered in Avondale Hospital; yet severe geometric abstraction was his overall calling.

The result is a stunningly rich celebration of Walters’ achievements, an exhibition borne by Auckland Art Gallery’s touring partnership with Dunedin Public Art Gallery that also brings a glorious purchasable hardcover book, laden with eight intriguing scholarly (but never dry) essays. There is also a free, exceptionally thorough, ten page handout (with coloured illustrations, like the book) that discusses Walters’ wide-ranging projects in impressively compact detail. That brochure is a treasure in itself.

This show brilliantly shows you the nature of Walters’ semantic layering; how stylistic appearances can be deceptive, and unanticipated content can sneak into places unexpected. Walters was more than just a formalist. There was a playfully furtive interest in logic and representation as well; it is not immediately apparent.

The funny thing is that although Walters (1919-1995) wanted his formally organised paintings to be enjoyed solely for their visual and compositional attributes—the koru paintings for example were not to be seen as depicting plant, wave or cloud forms—the scholarly information in this show about sources of inspiration undermines such purity. You start to see tattooed heads or ancestral bird figures even in rigorously geometric rectangles.

With eight rooms allocated to the presentation of sub-themes it doesn’t take too long for anyone familiar with his wide corpus to realise that the exhibits create a complicated web of cross-connections that dissolve the floorplan. It is tempting to mentally envisage these spaces for one’s own privately curated show, to imaginatively dismantle and rearrange the painting groupings; to make fresh themes and fresh connections by shuffling things around again—such is the complex range of possibilities.

You could for example have a room devoted exclusively to black and white paintings that have vertically stacked korus, and another with loosely pulsing, more isolated, koru clusters. Or you could focus on his shift in colour tonality (it became more even and—to me—less chromatically abrasive) apparent in the non-koru paintings of around 1975, a change possibly due to seeing reproductions of Bridget Riley’s colour works and their nuanced hue juxtapositions.

Of the eight rooms, there are four which I think are of exceptional interest.

(R4) A Continuing Enquiry presents a stunning selection of small gouache works on paper from the fifties, along with plenty of information about what stimulated Walters to painstakingly create them. (He never used masking tape.) In one of two vitrines we see a Giuseppe Capogrossi catalogue (with his distinctive interlocked positive /negative motifs on the cover) and on the walls three works featuring Marquesan motifs (stacked up stick figures) that have an affinity with Capogrossi’s graphic railway-track jaw-like images. Peter Brunt’s immensely informative article on Pacific influences in the New Vision book is handy here.

(R5) A Powerful Economy includes some Theo Schoon photographs of the original Māori rock drawings that Walters and Schoon visited in the mid forties in South Canterbury. The accompanying paintings show clearly how Walters simplified the ancestral bird figures into vertical rectangles with an oblong space in the middle, and thin arms and legs aligned vertically. You can also see the influence of LA painter John McLaughlin in a work where the skinny limbs disappear altogether.

(R6) Rhythm and Repetition: Powerful Serenity looks at Walters’ use of the grid, in his koru constructions and his interest in Polynesian lashing patterns, as well as European artists like Vasarely or Mondrian. The geometric elements hug the picture plane and tend to fill it up, so that the circular or square beats are unrelenting and highly percussive. In the Genealogy koru paintings you compare things like the number of vertical columns in each work, the differences in bulb size, the thickness of the gaps in between adjacent bulbs, or the height of the dominant black or white horizontal bands.

(R7) Descendents has one wall that features quite simple geometric (rectangular) works that utilise very controlled, midtone colour, avoiding harsh primaries and featuring slightly greyish secondaries, accompanied by black and white. As you might guess, I’m not keen on the brightly coloured koru paintings—and I find the drab, sun-faded, hangings outside the gallery on the street excruciatingly depressing. I much prefer the austerity and optical bounce of the crisper black and white koru works.

New Vision is a wonderful -albeit slightly convoluted—show, named after the Auckland gallery where in 1966 Walters first made public his koru paintings. It could have been organised so that each room presented a certain type of unique image—but that would over simplify. By having mixtures of work that reflect Walters‘ practice of working on several thematically varied canvases simultaneously, you get a sense of his parallel preoccupations, their overlapping linking points, and his deep curiosity about all matters visual.