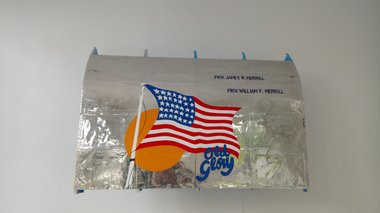 Weston calls his show 'Eschathon', a word for the final stages leading to the extinguishing of life on the planet. Although many of the references don't cohere chronologically the aircraft skin could be a metaphor for feeble planetary protection—a kind of woeful shield—and 'stereo dee.discovery' possibly a symbolic fire extinguisher that sets out to confront the impending conflagration.

With this exhibition Ian Peter Weston continues the fixation he is known for, an obsession with aircraft design (often Lancaster bombers from WW2) and the panelled metal skins that cover their tubular fuselage. He typically combines this intense interest with an investigation of the gallery space, projecting sculpture directly horizontally out from the wall or—as in this show—having a aluminium panelled screen (after icarus fallen) going out towards the centre of the room.

It supports four ‘canvases’ of absorbent paper towels that reference the shapes of the pieces of aluminium, and a few blocks of brushed on ‘hospital green’. It stands on storklike legs, like a freestanding (or hovering in the air) vertical painting holding more works; but with diagonal supporting struts extending back to the wall.

Weston presents three sculptural works in this show, all attached to the outer walls. Two you can get behind and look at their ribbed and cantilevered ‘backs’. The other one clings to the wall, and in fact has flaps presenting ‘windows’ onto the wall. It is a strange, vertically aligned fetish item with lines of studs and rivets, circular silver clips and rectangular brackets, shiny copper-coloured brushed surfaces and a hanging fire extinguisher-type pull-tab.

after icarus fallen, the silver screen with paper towels, seems a fetish item too. Perhaps the unfortunate Icarus was a bomber pilot who ended up in hospital swathed in towels. The reflective aluminium interacts with the ambient light to make the screen appear to be a moving, living object, inhabited by a spirit.

The other sculpture, the very joy of killing angels, a horizontal half-cylinder of silver aircraft shell that constantly vibrates, has a painted image of the American flag (with cursively written ‘Old Glory’) in front of an ascending orange sun-traditionally a Japanese motif. It has the names of two Civil War dead from the Merrill family painted on its front, and at the back we see—leaning on some armatures—a black/white photo of the body of a contemporary American soldier lying in a rocky gulch.

Weston calls his show Eschathon, a word for the final stages leading to the extinguishing of life on the planet. Although many of the painted references don’t cohere chronologically, the aircraft skin could be a metaphor for feeble planetary protection—a kind of woeful shield—and stereo dee.discovery possibly a symbolic fire extinguisher that sets out to confront the impending conflagration.

This artist likes to keep interpretive options loose and not direct his audience. He encourages any creative participation that conceptually locks sculpture and exhibition title together—any mental overview that generates a structure implicating American military activity (past, present and future) and the coming ecological apocalypse.