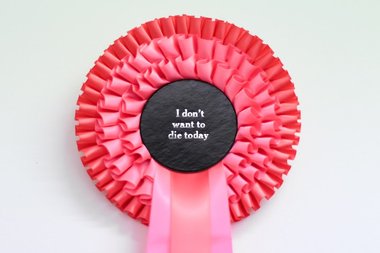 Philosophers of art in the analytic tradition have been arguing about many of the assumptions of this show for decades. For example, writing in the early seventies, at a time when abstract expressionism was in decline and conceptual art was in its ascendancy, philosopher Alan Tormey attacked those who claim “that works of art or the activities of the artist can best be understood as a form of expression”, preferring instead to “distinguish between the artist's activity in constructing a work of art and the outcome of that activity, the work itself.

Noting the manipulative title of this show (as a gallery invitation)—that pretends to nervously mock its own precautionary defences while also expecting generous interest from the reader—and noting also earlier shows in Auckland dealing with anxiety, such as The Anxious Image (1884) put together by Alexa Johnston for ACAG (with artists Clairmont, Fomison, Cleavin, Pearson, Harris, Siddell, Lynn, Smither, Fahey and Peryer), this exhibition is a thematic update, but one much broader in ambition: looking at the psychological phenomenon of melancholy and clinical depression in its publication and public programme. You could argue it is really about a mental state and not about art per se, but art locked in a narrative/social agenda.

Philosophers of art in the analytic tradition have been arguing about many of the structural assumptions of this show for decades— well before the rise of French theory with its stars like Foucault, Barthes, Deleuze and Derrida. For example, writing in the early seventies, at a time when abstract expressionism was in decline and conceptual art was in its ascendancy, philosopher Alan Tormey attacked those who claim “that works of art or the activities of the artist can best be understood as a form of expression”, preferring instead to “distinguish between the artist’s activity in constructing a work of art and the outcome of that activity, the work itself.”(1).

Tormey attacked the view that the two are connected:

The argument for such a connection is usually established somewhat in the following way: aesthetic objects, including works of art, are said to possess certain perceptible physiognomic or “expressive” qualities such as ‘sadness’, ‘gaiety’, ‘longing’; and where these are qualities of intentionally structured objects it is reasonable to assume that their presence is the intended consequence of the productive activity of the artist. But the Expression theorist is not content with this; he (sic) will go on to assert that, since the aesthetically relevant qualities of the object are expressive qualities, the productive activity must have been an act of expression and, moreover, an act of expressing just those feeling states whose analogues are predicated of the object. (2)

Tormey looks at the art then the artist. Kari Schmidt’s small essay argues sequentially the other way round, that the artists imbue the intended stress-laden meaning into the artwork, that by stating that intention in a text that the gallery visitor might well read first, the ‘anxious’ meaning becomes apparent when the art object is encountered. Rachel Ashby discusses the current ‘crisis’ political climate with the musicians who then contribute, Sarah Callesen’s flickering drawing is transmuted into a playable audio vinyl disc, Olyvia Hong “tunes in on feelings of anxiety” when painting, Anh Tran also works “through feelings of anxiety” with paint (but is surprisingly optimistic about climate change), while Taylor Wagstaff attaches his canvas of “chaotic swirling” marks to a symbolic aluminium book shelf that represents all the massive problems confronting contemporary global humanity. It is weighed down with a length of piled up heavy chain.

In keeping with the gleeful deviousness of the title of this show—with its overt sense of entitlement—the discussion in the takeaway essay is also slippery. Most of the artworks fall in line with the prevailing crushing instrumentalism, but thankfully not all. Ellie Lee-Duncan’s colourful rosette with its “I don’t want to die today” centre surrounded by ribbons, seems to reference the optimism of the “I am still alive” telegrams of On Kawara, while their gorgeous watercolour, an appropriation from the anime Sailor Moon, is highly ambiguous in matters more than gender or mental stress. In fact through its quotational process, it has a refreshingly lack of ego-centric earnestness, an openness that could be signifying exuberance and joy rather than anxiety.

Likewise Holly Paynter’s Beating a Dead Horse, which outside of being funny, satirically cute and flirtily seductive (it has anti and pro feminist sensibilities blended), could also be a savage critique of the show itself, the title mocking Schmidt and Callister-Baker’s dated curatorial premise-even though the artist’s horse is a floor mop.

Some of the works here I enjoy because (like that of Paynter) they are just plain damn clever—despite being outmoded in their rationalising process. Olyvia Hong’s Water Weight is a disturbing painting of a truncated torso drawn with a crumbly red eraser, while her image of a military jet zooming across a flat desert landscape looks as if it were drawn by Francis Bacon; Sarah Callesen’s framed ink drawing is also pretty intriguing, independent of its functional purpose to compose and eventually generate sound.

Though inconsistent in quality (in terms of visual appeal and idea), this is a fun show to visit, despite the seriousness of its theme. It’s well worth exploring; with three auxiliary publications to plough through as well—if you happen to be a person with unlimited leisure time and not too busy.