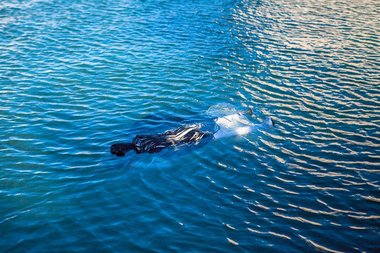 Under the theme of counter narratives, this year's programme grouped a number of live performances, social engagement projects, kinetic sculpture, video and interactive digital works. Some of the projects were swapped around halfway through the two-week period, which enabled the venue to be used in different ways and to capitalise on repeat visitation. These spatial and durational parameters were notably challenging for some projects.

A body was seen floating in Wellington harbour. It was face down in the water and enveloped in a tangle of long black hair and white fabric. This chilling sight, which no doubt caught some people off guard, was a performance titled Haumapuhia Rising by artist Lynn Lu as part of The Performance Arcade’s 2018 programme.

Celebrating its 8th year and located on Wellington’s waterfront, The Performance Arcade is a nationally significant art event that has grown in ambition with each iteration. In particular, the event’s temporary shipping container architecture has evolved from a simple sequence of containers arranged in a line to the much more elaborate 2018 construction - consisting of multiple two-storey stacks of containers that created a central arena-like enclave complete with a café/bar and stage.

Under the theme of counter narratives, this year’s programme grouped a number of live performances, social engagement projects, kinetic sculpture, video and interactive digital works. Some of the projects were swapped around halfway through the two-week period, which enabled the venue to be used in different ways and to capitalise on repeat visitation. These spatial and durational parameters were notably challenging for some projects. The more effective works were those that utilised the containers conceptually as part of the material of their work, or those that took the opportunity to escape the infrastructure altogether to engage directly with the city.

Lu’s Haumapuhia Rising is a good example of a work that expanded the programme beyond the container complex. The performance consisted of the artist floating in the harbour, aided by a hidden snorkel, for 1.5 hour periods. The programme states that Lu was inspired by a Māori legend of a woman called Haumapuhia who was drowned at the hands of her father. As far as I can tell this legend is not connected to Te Āti Awa or the Wellington Harbour but of Tūhoe origin linked to a taniwha presiding over the waters of Lake Waikaremoana. According to the story, Haumapuhia’s spirit is forever seeking to reach the ocean but is bound to the lake. Perhaps by shifting from lake to harbour Lu’s work provides a counter narrative where Haumapuhia might now symbolically escape into the sea.

I missed the performance by only a few minutes but a photo of it appeared on my Instagram feed later that evening. By experiencing Haumapuhia Rising via social media the work became reduced to a singular image that conjured up the familiar horror or ghost story trope of a drowned female body—think of Hideo Nakata’s film Dark Water (2002). Works like Haumapuhia Rising that can produce powerful images which hold their potency online are increasingly important for fleeting events like The Performance Arcade and for art audiences who are forever time poor.

Another work that reached beyond the temporary venue was Rebecca Patrick’s Caravan—Return and Repeat. This pod-like plywood caravan was towed by bicycle to numerous locations around the city. If the tiny house movement is an opposition to climbing house prices, then Patrick’s tiny caravan is the logical solution to the equally unaffordable dream of the Kiwi bach. I spied the caravan parked upon the sand at Oriental Bay Beach, enjoying a multi-million dollar harbour view.

Many of the works back at the shipping container venue tended to be more theatrical or autonomous in nature. One such work was Sense of a Stranger by Olivia Mahood and Poppy Serano. In this work, numerous pairs of performing arms poked out of a large black wall and beckoned people to approach and interact with them. This was a charming piece that captivated anyone who walked by and demonstrated how body language is an important part of social encounter.

Theatrical works like Sense of a Stranger are significantly more forgiving within a temporary offsite exhibition format by virtue of the fact that they are less dependent upon the nuances of their context to produce meaning. In contrast, the more difficult projects to realise are those that seek out a direct relationship to their surroundings and that use the context of their display as a core component. One work that did not disappoint in this respect was Jordana Bragg’s Forecasting / and Again.

Forecasting / and Again found Bragg lying cruciform for hours at a time on the hood of a car perched precariously on top of a large empty shipping container. Inside the container was a monitor playing an endless looped video of Bragg on top of the same car but this time with it driving in circles. This use of the container, as a giant plinth-like prop and industrial interior space, encouraged sustained visitor engagement with people walking around and inside the container multiple times.

The intrigue of Forecasting / and Again was also due to the fact that it operated on many conceptual levels ranging from a cynical expression of powerlessness to a sly parody of the patriarchy. The existential sentiment is reinforced by the video’s looping narration that frames life as simply an endless cycle of innate human desires and foibles:

“And again, the sun rose on the next day. When your back is turned, the day does not turn away. Always the same. Love is absolution, persecution, ejaculation, always the same.”

This dour evocation might provide resonance to the recently heartbroken, those in a state of ennui with modern living, or the many who are feeling helplessness in the face of issues such as climate change and discrimination.

A more pointed reference is Chris Burden’s seminal performance TransFixed (1974) in which he was half naked and nailed to the back of a Volkswagen Beetle. Bragg, in comparison, was fully clothed and free to lie on top of the car or to sit in the driver’s seat for a break. Aside from the religious connotations, is there a counter narrative to be found here? A critique of an art world patriarchy? Potentially. But more pertinent, I think, is that Bragg makes a deliberate distinction that they will not unduly suffer for their art. Thereby resisting the privileged expectation that painful endurance equals powerful art—a formula that typifies many iconic works of performance art.

Another interesting work employing the context of the shipping container was Paul Donald’s Away. Donald utilised a container as a storage unit for lengths of timber that each day he would use to build a walkway that served no functional purpose. His day’s labour would then be dismantled and stored in the container ready for the next day when he would start again from scratch.

Bragg’s and Donald’s form of art practice can be more difficult to execute in an event like The Performance Arcade because it is sensitive to how it is spatially accommodated. Audiences can also find this type of work difficult because it is open to interpretation and it also unsettles expectations of performance as conventional entertainment. It is this tension between the context of a temporary exhibition and how it inhibits or enhances an art experience that will always be a hard, if not irreconcilable, sensibility to seamlessly execute. All credit to The Performance Arcade for persistently daring to walk this tricky contextual tightrope as the only noteworthy exhibition in New Zealand dedicated to performance in all its forms. 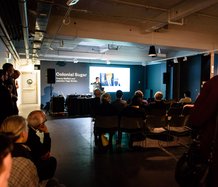 The Tidal Rhythms of Māori Curating 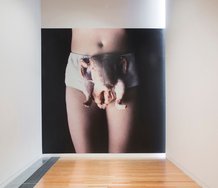 The Complexity of Acting Out