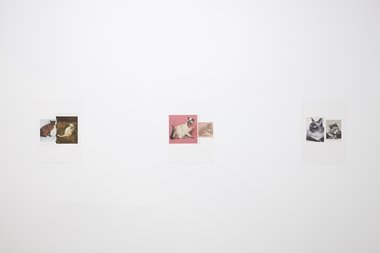 Seymour is prone to getting gooey-eyed over felines. It shows in these magazine photos and her earlier videos, for the works are not all about production processes and manipulation of materials. She obviously has a big archive of cat images to select from.

Ava Seymour
Around the Day in Eighty Worlds

The first exhibition in a brand new, two roomed gallery in a small arcade next to George Courts on K’ Rd—and formed by a collective that includes some of the members of Terror Internationale—Around The Day in Eighty Worlds presents 40 works by the highly admired collagist Ava Seymour. Seymour doesn’t always make collages but she is widely known for her cut-out paper images (sometimes funny, sometimes nasty) involving photographs of rubber fetishists (Rubber Love), state houses (Health, Happiness and Housing), and human body parts (from surgical manuals). Even when alluding to formalist abstraction, she has the knack of being effortlessly disturbing (brutally offensive, subtle, or a little furtive).

With this show of new scalpel work, Seymour flips over to present a sweeter—perhaps even saccharine—side. She is displaying 40 pages of cut-out or torn-out magazine photographs of cats (many types, as duos). On each page, two felines are juxtaposed, and the rectangular-image edges carefully considered. The pairing of the two animals in each collage has their facial expressions aligned so that they both gaze at the same object in the distance. Together they create a narrative about an unseen element the viewer can’t see but only guess at.

With the spoonerism-like swapping around of nouns in the title based on Jules Verne’s novel, we see a unification of the initially separate narratives from different magazine, with the cats or kittens eyeing up a common rival, potential food supply or mate, or something to kill for the fun of it. (Maybe you can tell I don’t like cats?)

It is a simple very effective idea, to concentrate on the head positions and eye directions of these paired up animals to imply a third space that floats in the artist’s and viewer’s imagination. It also might be interpreted as being about visitors in an art gallery, though the cat context within Seymour’s practice undermines that.

Why? Because Seymour is prone to getting gooey-eyed over felines. It shows in these magazine photos and her earlier videos, for the works are not all about production processes and manipulation of materials, and certainly not a human metaphor. She obviously has a big archive of cat images to select from.

‘Gooey-eyed’ is a better term for her, rather than say, presenter of kitsch or sentimentality. (Tiffany is her closest four-legged, pointy-eared friend.) Seymour is undoubtedly obsessive (as a collector) but she is not boring about it. These collages are very funny. They are also irritating if you consider cats an ecological issue.

In an accompanying—informative but turgidly dense—essay that is handed out with this show, Shiraz Sadikeen writes at great length about these images being “both kitsch and reflexive formalism” jammed together, but I think Sadikeen is barking (meowing?) up the wrong tree. These works are about an imagined narrative more than visual, textural or material qualities, though the latter certainly are important (they are Seymour’s forte). That suggested narrative dominates over the material qualities of say edge, angle, and texture—though Seymour wants you to spot that stuff.

The power of Seymour‘s simple idea pushes it away from formalism towards the inner workings of the cats’ minds—80 sentient cat consciousnesses—and what we might speculate is going on. Seymour has in her practice always been big on emotional manipulation (whether that be humour, aesthetic pleasure or anger), and here once you get the joke (40 times) it takes quite a while to wear thin. More so if you happen to like cats.