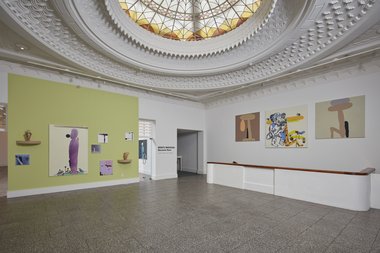 While I appreciate Watkins' affinities with semi-figurative artists like Picasso who often mock moral frailty, or exuberant whimsical animators like Disney's Ub Iwerks, I really enjoy his riffing off abstractionists like Monique Prieto: his love of fluid form and edge, and his exhilaration with washes of drifting granular texture. Simply put, his manual trademarks, his dexterity with materials are what is so compelling—oozy, fluid, tidal formlessness that is nevertheless contained.

In Denys Watkins‘ (self-selected) Gus Fisher survey there are about 33 works in the central domed foyer and large gallery—including two animal decorated ceramics. While the stretcher size and proportions vary, most are either 1200 x 1200 mm, like the 14 works lined up in the main (largely white walled) gallery, or 20 x 25 mm, like the smaller canvases on the pink or pale green walls. In these works, areas of foregrounded, brusherly or geometricised, saturated colour contrast with background fields of muted, tertiary, highly textured mid-tones. Compositional motifs range from aquatic flora and fauna and circus architecture to revolving machinery parts and animal characters found in popular fables.

The title of the show, Dynamo Hum, is taken from a satirical, 1973, Frank Zappa song (Dinah Moe Humm) about a young, female, rock band admirer who has difficulty acquiring orgasmic pleasure. While it suggests Watkins worries about those who cannot enjoy the God-given pleasures of their own bodies, and that he (Watkins) owns and loves the Mothers of Invention album (Over-Nite Sensation) the song is on, the titles of his paintings are just as often taken from seventies books of poetry by writers such as Lawrence Ferlinghetti, Gary Synder or Hone Tuwhare, as much as records—as this article (click here) by Julian McKinnon shows.

Fascinatingly, Watkins‘ more figurative (less abstract) paintings, works with graphic linear forms involving caricature, exude a nastiness found occasionally in Zappa, a ferocity that comes close to misanthropy, but which is offset by exuberant—as well as gleeful—humour too. The chimp paintings are good examples. They are caustic. (A similar sensibility to that of Barry Cleavin.)

While I appreciate Watkins‘ affinities with semi-figurative artists like Picasso who often mock moral frailty, or exuberant whimsical animators like Disney’s Ub Iwerks, I really enjoy his riffing off abstractionists like Monique Prieto: his love of fluid form and edge, and his exhilaration with washes of drifting granular texture. Simply put, his manual trademarks, his dexterity with materials (his current obsession with liquidity) are what is so compelling—oozy, fluid, tidal formlessness that is nevertheless contained. These organic formal qualities (so rich in associations) dominate over his narrative interests which often emphasise underwater dioramas anyway.

This is a somewhat contentious view I know. Watkins understandably actively resists being categorised as merely somebody having fun with materials and processes; his many catalogues say as much with his artist statements and lists of enthusiastic interests that include books he is fond of. He has, after all, spent most of his life teaching painting in a university art school. And the new hardcover book published by (Rim Books and the Bath Street Trust) that accompanies this show—rich in images (many of works not in the Gus F. sampler), interviews and looks at his academic / recreational passions—emphasises that fact: especially the conversation with Allan Smith, the foreword by Matt Blomeley and the essays by Anna Miles and Francis McWhannell, which with their packed and intricate detail give you a strong sense of the restless enquiring mind behind the paintings.

The erudite texts provide you with the multiple personalities that guided the younger Denys’ avaricious enthusiasm for painting, arts and craft, design, fashion and printmaking—his aesthetic moulding during the London years (1967-70)—and when you think about this value system, contrast it with the ‘Research Based Projects’ we are now currently seeing in Auckland from artists like Denny, Stevenson, Mitchell and Enberg.

Bromeley comments that “For a large portion of the years covered by this monograph, it felt like the cyclical ‘resurgence of’ followed by ‘end of’ pronouncements for painting were becoming hashed out semi-annually. Painting of course never goes away (p. 5).” It is an old chestnut this issue. Yet Watkins himself writes:

I’m still asked—‘What does it Mean?’
Something and Nothing, What is there to explain?
Painting is a conceptual art form,
So I’m told? (p. 95)

Here he seems to be saying that painting is not a conceptual art form, that he is mostly an abstractionist and that meaning is not crucial to its success—despite the trouble, often discussed, that he takes with work titles, and his keeness to reference literary or scientific content. Although Watkins‘ own ambiguous practice very reasonably resists the notion of articulated thought, he might have to contend with the fact that painting may indeed disappear if contemporary art practice becomes totally dominated by neo-conceptual art, and alternative production motivations are disallowed or discouraged. Especially in tertiary institutions.

If art has to be fixated on meaning.

Many thanks indeed, Denys, for this lucid explanation. It is a superior elucidation for sure. I love the idea of ...

Hi John, Just to clarify the origins of the title - DYNAMO HUM, the reference was not attributed to Frank ...

Hi John,
Just to clarify the origins of the title - DYNAMO HUM, the reference was not attributed to Frank Zappa,s song, but originally to the device that is driven by bodily movement that creates a electro-magnetic force that generates light, more analogue than digital. Although I realised after decision was made for the book title, that the Zappa song existed, it was not a direct connection. Though I do like like "Ruben and the Jets" and can tolerate "Hot Rats" I don't own that particular album (Over-Nite Sensation) -- great title? I have been taken by his album covers. More manual activity than teen obsession. cheers Denys

Many thanks indeed, Denys, for this lucid explanation. It is a superior elucidation for sure. I love the idea of bodily movement driving image production; the process of working through muscular manual activity to generate or kick-start compositional decision-making. Fabulous!