Mitchell & Hurley in & on Wellington 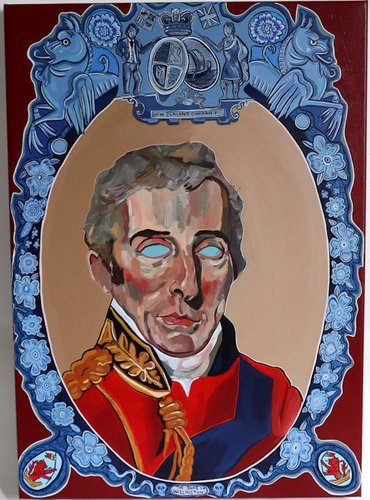 Mitchell and Hurley’s exhibition toys with Derridean différance by showing us how a word is as much what it is not, as (it is) what it is. Through the construction of layers of meaning across history, the identity of the words Wellington and Waterloo have picked up baggage that will always accompany their use. Wellington and Napoleon’s Waterloo is always relative to ABBA’s, just as Waterloo’s Wellington is always relative to New Zealand’s own.

Sam Mitchell and Gavin Hurley
Knowing my Fate is to Be With You.

The “few drops of water” invoked by Victor Hugo were the heavy rains in June 1815 that delayed the Battle of Waterloo. With Napoleon unable to manoeuvre his artillery pieces into position on the sodden Belgian fields, Prussian troops were given time to connect with Arthur Wellesley, the Duke of Wellington, on more favourable ground. Thirty-five years later, under the direction of the notorious William Wakefield, the first New Zealand Company settlement was attempted in what is now Petone. Ambitiously named Britannia, the settlement was abandoned due to the swamp-like conditions of the Hutt Valley river mouth and the frequent flooding of Te Awakairangi. Wakefield moved the settlement to Lambton Harbour, where it was renamed after the victor of Waterloo, a leading sponsor of the Company. A few drops of water brought about victory for the Duke of Wellington, and a few drops of water created the city named in his honour.

Knowing My Fate is to Be With You, a joint portraiture exhibition by Sam Mitchell and Gavin Hurley at Bartley+Company Art, is a show about two Wellingtons, and about two Waterloos. A mixture of canvas, linen, and ceramic plates, the twenty-three works dance between the imperial, the colonial, and the contemporary. The subjects of Mitchell and Hurley’s portraits should have nothing to do with each other. The combatants of Waterloo hang beside canonical figures in the formation of Wellington city’s political and cultural identity: individuals such as Ettie Rout, Helen Hitchings and Richard John Seddon. These two groups are punctuated by Mitchell’s canvas and ceramic depictions of pop titans ABBA. The great loser of Waterloo is juxtaposed with the great winners of 1974’s Eurovision Song Contest. Yet, of course, these disparate works are tied together by two words: Wellington and Waterloo. ABBA’s europop masterpiece takes its title from the battle that represented Napoleon’s defeat and Wellington’s victory.

Mitchell and Hurley are far less concerned with a portraiture of likeness than they are with one of association. But more than this, portraiture’s historical role as a constructor of identity, as a sign built from visual associations, is challenged by the hierarchy with which we attach ourselves to those associations. Both artists play with the construction of identity, and the ways in which the passage of time manipulates these constructions.

Mitchell’s portrait of Richard Seddon, King Dick, is quite literally filled with signifiers of the long-serving premier. There are symbols of freemasonry, Queen Victoria’s jubilee medal, a lion emblazoned with ‘King Dick’, and two suffragettes holding a ‘VOTES FOR WOMEN’ placard. Seddon himself is painted in a corpse-like mix of greys and greens, but his brown eyes stare out of the image with a hypnotic intensity that recalls Rasputin or Big Brother, a powerful reminder of his autocratic tendencies. This is not the image of King Dick that the premier would have dreamed of being passed down into posterity. Instead, it is a construction built of the associations that we hang onto him today. For while the Electoral Act of 1893 that marked the achievement of women’s suffrage was passed under his administration, Seddon himself was a vehement opponent of the movement.

In Arthur, Mitchell’s rendering of Sir Thomas Lawrence’s portrait of the Duke of Wellington, Wellesley’s slightly deviated septum has been emphasised to the point of caricature, resulting in a swirling mass of nostril in the centre of the painting. This reduction of a visage to a dominant feature is in turn overwhelmed by the replacement of Wellington’s eyes with two blue voids à la Village of the Damned. Captured within a painted frame adorned with the New Zealand Company’s coat of arms, it is difficult not to associate Wellington’s empty eyes and inhuman contortions with the soulless alienation of Māori land by Wakefield and the New Zealand Company. The signifiers in Lawrence’s original that spoke to the status of Britain’s most admired general (Garter sash, Knight’s Grand Cross, Field Marshall’s uniform) are subsumed by associations with the colonisation of New Zealand, in which Wellington played a significant role.

Hurley’s portraits of Wellington, Napoleon— and figures in the formation of Wellington such as Alexander Turnbull and George Grey—are painted within an imagined mid-century office environment. His signature Fernand Léger-style robotic portraits built from smooth, cold greys and earthen tones are coupled with faceless workers and office equipment reduced to cut out shapes, creating another kind of association with alienation. Hurley’s portraits within still-lifes give faces to the founders of the culture of officious and exclusive masculinity that long played out in the halls of Parliament and still shapes much of the public sector today. Wellesley’s signification shifts from the hero of Waterloo to the mascot of Wellington’s power centre, a history of an old boy’s club.

The above works are examples of identity constructed through association. They mix the images that their subjects cultivated of themselves with the baggage of time and historical revision. And this is half of what Knowing My Fate is to Be With You communicates. The other half arrives with ABBA. Mitchell’s ceramic, Waterloo, has the band framed by a quartet of cassette tapes which coats the work in nostalgia for car trips and lip syncs. The tapes’ titles, such as The Battle of Waterloo and Napoleon, let the historical bleed into the contemporary and vice versa. The ABBA works force you to question what you first think of when you hear ‘Waterloo’, or ‘Wellington’. Does your mind jump immediately to a battleground in the United Kingdom of the Netherlands, or to the final number in Mama Mia!? Do you think of the master of adaptive defensive warfare, or of a windy city in the antipodes? This of course depends on the range of cultural and socio-economic factors that construct our own identities.

Regardless of which meaning first comes to mind, the point is that you ultimately think of both. Knowing My Fate is to Be With You is semiotic play at its joyous and humorous best. The dance of association between the works lets us meditate on the construction and destruction of identity through image and word. But more than this, it speaks to the way in which the disparate meanings attached to a word are forever connected through the sign of the word itself. Mitchell and Hurley’s exhibition toys with Derridean différance by showing us how a word is as much what it is not, as (it is) what it is. Through the construction of layers of meaning across history, the identity of the words Wellington and Waterloo have picked up baggage that will always accompany their use. Wellington and Napoleon’s Waterloo is always relative to ABBA’s, just as Waterloo’s Wellington is always relative to New Zealand’s own.

Whether the historical and cultural links that play across the exhibition are strong or weak, whether we jump first to one or the other, whether we think it a good thing or not, their association is irreversible. Mitchell and Hurley understood exactly what they were doing when they titled this show Knowing My Fate is to Be With You. The Waterloo lyric perfectly captures these bonds of association, forged through layers of cultural and historical meaning. Nevertheless, I cannot help feeling that there is another Waterloo lyric that has a place in this exhibition: ‘the history book on the shelf is always repeating itself’. Mitchell and Hurley’s exhibition jumps across time and space from a European battle, to a colonial city to a pop group. It is a nod to Napoleon, Wellington, and ABBA, but also a wink to us.