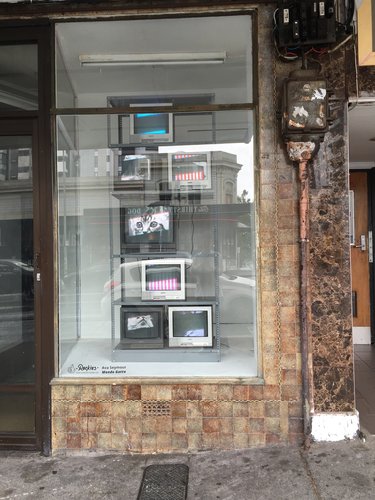 The two series (Safe As Milk and Smoke) have been previously shown in Wellington and Sydney, in sets where overall collective composition was important. However in this Auckland Newton window they might thematically seem unconnected, but are they? Cats can be openly ingratiating creatures, wooing you for attention (sucking up for food and stroking), but are these rock stars similar?

This K’ Road show at Rockies (with 24 hour visibility) is ostensibly less satirical and much straighter than you might expect, and apparently is sincere. Though Seymour is known for images that at times have been ferocious, confrontational and downright offensive, this presentation suggests she really is a softie. Using a tower structure of seven monitors positioned close to a gallery window next to the footpath, it is a boisterous paean to feline pets (Safe As Milk) and sixties/seventies rock stars who partake in the pleasures of inhaling nicotine (Smoke). No sound, just still photographs sequentially changing, and sometimes moving to other parts of the stack. It looks particularly dramatic at night. Dramatic and conspicuous; but also sentimental.

There are five shelves holding seven monitors, with - at the top - pale blue sky alternating with Hendrix blowing smoke out of his (‘‘scuse me while I kiss the sky‘) lips. With the four shelves below, the lefthand side screens tend to feature Siamese or longhaired fluffy cats, with rock musicians on the right. The third and fifth ones down from the top have thin Burenesque vertical stripes, one orange and white, the other raspberry and white. Very pretty.

The two series have been previously shown in Wellington and Sydney, in sets where overall collective composition was important. However in this Auckland Newton window they might thematically seem unconnected, but are they? Cats can be openly ingratiating creatures, wooing you for attention (sucking up for food and stroking), but are these rock stars similar? Well actually, no. These celebrities may be ‘cool cats‘ but they are not posing, slurping up to the camera, ‘sensitively’ holding carefully positioned cigarettes in an attempt to woo fame. They are (thank God) healthily indifferent to the camera. That is why they are cool. Cool not Kool.

Yet, yet, there is another angle. You can rethink all this….

If like me you love the ubiquitous fluffy feathered and occasional wiggly scaly creatures that inhabit the air and grass of your garden, then cats are vicious killers which need to be restricted in their outdoor access, and cat lovers deserve to be viewed with deep suspicion, like say voters for Donald Trump. The depicted creators of rock and roll, on the other hand, might stupidly be ‘coolly’ killing themselves through smoking, and they might irresponsibly be glamorising that addictive lethal recreation through the transmission of these images, but in essence they are liberating priests and priestesses who exult in the exhilarating sound-driven pleasures of the moving body, tapping into extraordinary celebratory energies that can lift us all.

That doesn’t excuse them but it explains.

What? Cat lovers akin to Trump voters? Ergo Clinton voters akin to... Who? Bird and lizard lovers? Welcome to the ...

Ergo Clinton voters akin to... Who? Bird and lizard lovers?

Welcome to the Species War earthlings, that time when “explanation” f_cks with “excuse” in a whole different manner.