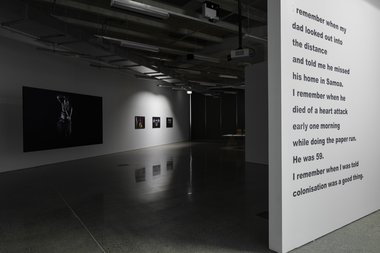 This presentation of tertiary work, eleven Pasifika artists selected by Ane Tonga, has the feel, not of some student event annually trotted out, but of a major exhibiting statement loaded with sufficient consistent wit to hold its ground anywhere in the country. There is a sufficient mix of video, installation, painting/ collage, text and sculpture to keep you guessing what bodily/mental experience awaits around the next corner.

The eighth in a series of yearly Tautai promoted shows, this presentation of tertiary work, eleven Pasifika artists selected by Ane Tonga, has the feel, not of some student event annually trotted out, but of a major exhibiting statement loaded with sufficient consistent wit to hold its ground anywhere in the country. There is a sufficient mix of video, installation, painting/ collage, text and sculpture to keep you guessing what bodily/mental experience awaits around the next corner.

The video installation by Nina Oberg Humphries has a dancer wearing various fluorescent components of garments linked to various different Pacific cultures that glow under ultra violet lights and which keep regularly changing in time to subtle changes in the music: Swiss’s slightly reggae version of the old Roy Orbison/Joe Melson song ‘Blue Bayou’. Cook Island, Tongan and Samoan costume elements shift around on the body of the dancer, just as matching changes in rhythm and movement occur that are only detectable by the most nuanced Pacific dance-conscious ‘eye’.

Experimenting with cultural mixing (via clothing combinations) also occurs in Shane Tu’ihalangingie’s set of three colourful photographs, except this time there is a conscious awareness of western (North American) influences. Constructed at home, and using the frames of three windows and as settings for silhouettes and ‘cubicles’ for front-lighting, these theatrical sensual images celebrate mostly Tongan motifs and design - accentuated by elegant decoration.

Pati Solomona Tyrell’s video featuring dance, music, and costume is, like Tu’ihalangingie, strikingly dramatic, and based on the Samoan notion of fa’aafa (half), an ‘in-between’ or middle. Binary gender is suspended and indeterminate while his/her film features time lapse delay and acceleration. Lurching torsos, elastically telescopic trunks and flailing multiple (Shivalike) arms, that are all bathed in a gorgeous silvery light, give this unusual video considerable impact.

Alternating with the playing of Tyrell’s Fa’aafa is The Weight of Skin, Jasmine Te Hira’s projection on the gallery floor of the artist, face down - as if in a grave, with flowers in her hair - having dirt shovelled on top. The title obviously refers to racism, and the action: the throwing of dirt. The soundtrack, with its weary repetition of shovelled scatterings, evokes an ominous mood of final conclusion.

Louisa Afoa has three works, two being videos that examine Pacific identity and racial animosity (often using objects (eg. oil from coconuts) or depicted processes (eg. pool cleaning) with symbolic overtones), and the third a text about her father and his tragic premature death while working a menial job delivering newspapers. Afoa uses autobiographical material directly as subject matter, not placing any distance (or mechanisms of irony) between artist and artistic narrative, not moving the self/persona (her Self while artist) away from the apparently personal content of her work.

Jasmine Togo-Brisby’s suspended ‘bark cloth’ is made of recycled Chelsea Sugar Refinery bags beaten, broken down and glued together to make a huge sheet (7000 x 3200 mm). The performative action of its construction is a scornful rebuke to the Chelsea Sugar Refinery for importing raw sugar from Queensland where the slave labour of Pacific peoples was used between 1863 and 1903. It’s a clever and pungently moving statement.

Looking at the row of parking meters positioned in the foyer by John Vea, each one has a small blue sign that says: Maximum visa: 7 months limit. $14.75 per hour. And the hours of work. Vea is referring to the seasonal work of many Pacific Islanders in the Bay of Plenty region and how they are prevented from having long term contracts, being restricted to temporary employment. The meters proclaim the transactional (and temporary) characteristic of their relationship with local employers, and are a particular variety found in the Hawkes Bay region.

In her presentation within the Front Box window gallery, Valasi Leota-Seiuli draws our attention of the imperialist forces (British and North American versus German) siding with competing Samoan factions during the Second Samoan Civil War (1898-1899) and the subsequent division of territorial spoils after a negotiated settlement. Her sculpture is a transferred glued-on image of one of the warships enclosed within a chunky thick (pointedly white) plaster frame. The image of the ship is only partial, being torn, faded and eroded, and seen by Leota-Seiuli as representing the victor’s manipulation within the transition from occurred fact to ‘truthful’ history.

Christina Pataiali’i’s three paintings, with their distinctive use of collaged paper and woven plastic taken from ubiquitous (red, white and blue) carry-bags (hung bak lam doi), refer in their titles to various suburbs in Auckland she has used the popular bulky bags (the material is a type of tarpaulin made in China) to move from house to house. The meaning of the painting conflates with the meaning of the type of bag.

The transporting of objects is also an interest of Pelepesite Tofilau and Rhueben Meredith who have designed printed boxes and paper forms to help prepare Pacific Island school leavers for the contingencies of tertiary education in Aotearoa: packages of helpful introductory material that are functional in the world beyond art galleries, and which help to make the whole universe an exhibiting, sensitivity constructing, art gallery.

Influx, as title, reflects that transportation or migration. It is a finely tuned collection of work, rich in inflections, cross connections, and counterfoils, that really hums - ably assisted by Tonga’s lucid essay. An exciting milestone for Tautai.