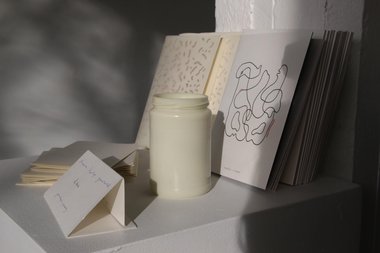 Viewers were treated not only to the visually delectable array of works, but to two meticulously executed exhibition catalogues. One, a text based booklet, outlined the artistic constraints and artist statements from each, along with some information on contemporary abstraction, the pricing of art works, and excerpts from two essays. The other booklet was a purely visual work with combinations of colour, layered transparent papers, and laser-cut macaroni swirls.

Same Same was a precisely arranged exhibition, centring around two artists, Delaney Parker and Rachel Peary, creating work within a set of predetermined limitations. These restrictions were selected by both artists to create resonance through their work. Prior to Same Same, each artist was working in contemporary abstraction, often layering flat shapes in muted pastel colours. As their aesthetic preferences were already similar, with these set limitations each artist’s own individuality became almost unidentifiable, as their working methods and aesthetics merged.

The obstructions each artist adhered to were outlined in the exhibition catalogue, and were numbered 1-5 as follows:

1. The size and number of works per size were determined

2. Include and respond to found objects, including at least 4 responses. ‘Each artist must include wood’

3. ‘Explore the use of layers and space’

4. ‘Adhere to a set colour palette of 7 colours. Mixing colours is allowed’

5. Each work must work within the boundaries of contemporary abstraction

This exhibition met me with a wave of 90s nostalgia, with the overarching colour palette recalling Super Wines, lemon meringues, peach and cream sweets, pink original Polly Pockets, and televised Californian 90s graphics. Pretty in pink and alike as two peaches, the works created a harmonious exhibition which kept you guessing which artist created which works. The saccharine colour palette was a refreshing change from more resolutely self-conscious art, and combined with the swirls and curved forms created an overall playful effect. Within the stylistic boundaries of abstraction, each artist exemplified an interest in simplified shapes and surface patterns.

Two standout works were Peary’s Birds and Bees and Parker’s Lessons in Patience. Recalling Killeen, Birds and Bees was an assortment of individual wall-mounted pieces, playful and child-like organic spiralling and curved forms set against the wall (similar to scrambled jigsaw pieces). Lessons in Patience was mounted found fabric with a jungle of bright, Ken Done-esque stripes and shapes, then coated in stretched see-through skin-like muslin, which altered the bright colours into a smooth, subdued tonality. Both examples showed each artist working with a whimsical, almost dreamy light-heartedness, ensuring the abstract nature of the works and their concepts of gender politics became less onerous and more accessible to the uninitiated viewer.

Both Peary and Parker were concerned with simplified shapes, clean flat colours, and dynamic layering of forms across surfaces. Viewers were treated not only to the visually delectable array of works, but to two meticulously executed exhibition catalogues. One, a text based booklet, outlined the artistic constraints and artist statements from each, along with some information on contemporary abstraction, and the pricing of art works. It also included two short excerpts from essays - one by Geoff Clarke on Parker, and the other by Peter Dornauf on Pearey. The other booklet was a purely visual work with combinations of colour, layered transparent papers, and laser-cut macaroni swirls.

In the first booklet, Peary’s discussion on her work aims to demystify abstract contemporary art to viewers, making her works more approachable. Furthermore, she states the ‘strategic constraints for us as the artists are a way of offering visual connections for the viewers between the works,’ and allows the viewers to have a closer engagement with the pieces themselves, and the details of their production.

Centred around her personal response to gender politics, femininity, and transgender issues, Parker’s writing in the exhibition catalogue outlines her intentions in creating her own works. For Parker, these works are not the end result of her consideration of these issues, but rather part of her process in unpacking these concerns. Particularly around exploring and defining gender ideas and constructs, Parker is aware of the feminine connotations of ‘craft based mediums.’ Through her use of fabric, organic dyes, and curvilinear forms, she intends to reconcile these aspects with painting conventions, within her own practice.

I believe the limitation of the colours to seven shades (defined and pictured in swatch spots in the publication) was less successful than the other limitations. After all, this restriction specified that mixing colours was allowed, and the prescribed colours included black and white - rendering any combination of colour shades and tones permissible. And although the initial colours received a look-in, each artist modified their hues from the pre-determined colours (early 90s deep grunge tones of mustard, terracotta, forest green, etc) so they became late 90s millennial, minimalism influenced, washed pastel tones (creamy yellow, mint, peach).

In fact the exhibition was a peach punch, placing emphasis of this tone and other fruit-named colours, like apricot, melon, tea rose, and papaya. This mellow pink-orange, seen pervasively throughout Peary and Parker’s works, linked to the strong feminine connotation associated with this colour in the Western world within the last sixty years.

Yet to simplify this as some kind of purely feminine essence would limit this exhibition. Concerned with gender politics, these works (particularly Parker’s) questioned what constitutes the appearance of femininity, particularly when the idealisation of hyper-feminine bodies, through the proliferation of image-based advertising, is under continuous scrutiny by the current jaded generation. Where binary genders are questioned as the prevalent norm, and transgender identities become increasingly visible, the question is prompted: what does this gendered colour signify? Same Same toys with femininity and frivolity, but its appearance of lighthearted pep is created through a process of meticulous care in the creation, conceptualisation, and justification of each image. The fact the works appear so playful is the result of patient, painstaking precision, and a conscientious reinvention of craft, painting conventions, nostalgia, and gendered boundaries. 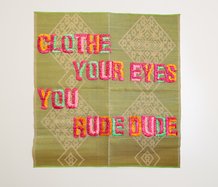 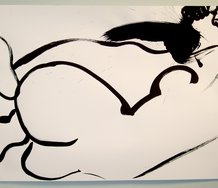 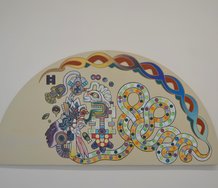 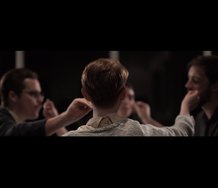