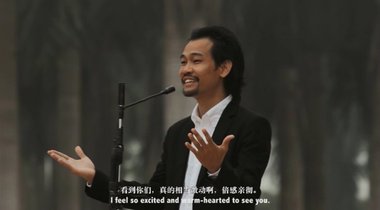 A complex, multi-layered exhibition that involves a group show in the Te Tuhi building, several off-site components and a research initiative about the moral properties of conversation, 'Share/Cheat/Unite' explores the social consequences and benefits of lying and cheating (to ourselves, to others), whether we are self-promoting politicians, ‘convivial' family members or friends, or ambitious (even devious) artists.

Share/Cheat/Unite, put together by Bruce E. Phillips (Te Tuhi’s inhouse curator) follows in the tradition of his The Hive Hums With Many Minds (March 2016), and Unstuck In Time (August 2014). Even though it takes time to ease into with its theme of self interest versus co-operation, I think this presentation will be perceived as Phillips’s most sophisticated project yet. He is rapidly turning into one of the best curators in the country, and Te Tuhi, the most important contemporary art institution in Auckland.

A complex, multi-layered exhibition that involves a group show in the Te Tuhi building, several off-site components and a research initiative about the moral properties of conversation, Share/Cheat/Unite explores the social consequences and benefits of lying and cheating (to ourselves, to others), whether we are self-promoting politicians, convivial family members or friends, or ambitious (even devious) artists. It is preoccupied with the ethics of ‘artistic’ social relations, examining the contextual situations in detail - presenting a lot of work to be raked through, thought about and evaluated - in a multilayered (interconnected) display. Almost all of it is intellectually exciting; some of it is extremely subtle and full of unanticipated surprises.

One of the activities that feature prominently amongst the varied contributions from the selected artists is that of speech making. The public speaker is a constantly reoccurring motif, and with a lot of the sentiments being elucidated you have to decide whether the speakers are worthy and sincere, dubious or dodgy, or self-consciously ironic and calculatedly absurd. You have to think very carefully before you accept anything at face value. And if what is being projected for you to absorb is ostensibly the opinion of the curator, or the artist - and if that in fact matters.

One of the most striking examples is the speech by the collective YOUAREHEREWEAREHERE, delivered during the opening by Head of Elam, Dr. Peter Shand, and documented here on video. On the amusing and alarming clip (now in the gallery) you can notice things not immediately apparent during the hubbub on the Saturday afternoon opening: the twinkle in the performer’s eyes, the very subtle half smile, the almost entirely straight face, despite the teasing digressions of the carefully crafted, half-plausible ‘introductory’ text. Playing on the anticipation of his audience, Shand gradually builds up to a story at the end about a Russian film about a nuclear holocaust caused by computer error, where missiles are launched and the protagonist tries to stop them - a film made before Chernobyl. Then he speaks very slowly, exasperatingly seesawing back and forth between despair and optimism:

If you blink you will miss it. The bomb will go off. Don’t blink. It applies to now. Don’t miss it….All our problems will be worked through…A time of hope…You are here. We are here.

Giving a motivational speech to a large crowd of bored Chinese school kids from rural villages is the task volunteered by Hu Xiangqian, a performance artist concerned about the value of reading as a way of nurturing independent thinking, and engaging with a wider world beyond the provinces. He is clearly a man with a mission. But as an avid reader who sometimes believes that the activity of reading can be overrated, I wondered whether Hu Xiangqian was totally serious (he is) especially when hearing him say things like: ‘If you don’t read you won’t be able to understand yourself.’ Like Shand, Hu is a polished and charismatic performer: he often makes works that involve acting and learning ‘spontaneous’ scripts which hoodwink the audience - only not in this case.

Sasha Huber, a Swiss Haitian artist, presents four films and four photographs mocking the anthropological documentation of tribes-people or (in this case) African slaves recorded by the controversial nineteenth century Swiss biologist and geologist Louis Agassiz (1807-1873). Agassiz, in his lifetime (and typical of the era), elaborated on a theory about the superiority of the white race, the damaging effects of which seems to have encouraged the subsequent growth of Nazism and Apartheid. Because of his prowess in paleontology and glaciology, his name has been admiringly given to several landforms (or towns) in Scotland, Canada, Switzerland, Brazil and New Zealand, and so Huber is part of a group that tries to get these appellations replaced, sometimes by the names of those he denigrated. The highlight of her contribution to Phillips’ show is a filmed ‘lecture’ by actor Thomas Götz in the role of Agassiz, elucidating and defensively justifying his (to us, obviously poisonous) ideas, the text written by his researcher Hans Barth. One assumes that every detail in the very informative script is carefully sourced.

The late Guatemalan artist, Anibal Lopez‘s contribution is a dOCUMENTA 13 project where he arranged for an anonymous sicario (assassin) - whose identity is hidden behind a screen on a stage - to be interviewed publicly by a predominantly European audience: a series of Q & A. He casually discusses the many murders he has been contracted to carry out (over 23), his pride in his professionalism, and his passing on of his skills (also involving cocaine running) to the young. It is a chilling video that raises questions (once you’ve assumed the sicario is not an actor) about a prestigious art event glamorising the criminal lifestyle, and glorifying violence.

Taiwanese artist Chou Yu-Cheng‘s project involved initially advertising for a casual temporary worker, male or female, 50-60 in age. Lu Chieh-Te applied and the artist decided to use their conversations (a series of stories about his working life, candidly mixed with the occasional dishonesty, or personal demon) to construct a book (he employed a ghostwriter) which is freely available to take in the installation, and a very good read. The books are stacked on a huge plywood table that is patterned after the writer’s favourite shirt, and in the Taiwanese presentations Chou Yu-Cheng employed Lu Chieh-Te himself as a guard, to be a docent /explicator for his own installed publication.

Jonathas de Andrade’s contribution (he was also recently in Space to Dream), O Levante (The Uprising), focuses on the politics of living in his hometown, Recife, the sixth largest city in Brazil. He sees the city bureaucrats as deliberately snubbing the surrounding rural populace by preventing the farmers (and their ‘messy’ animals) from entering the city centre. To undermine this, and using the pretence of a film shoot, he organised a wildly chaotic cart race through the streets of the CBD. Fibbing about the scale of the film, but documenting (with clever editing) the exciting race itself, de Andrade brings the farmers into the inner sanctum. One of the cart drivers sings an ominous song about The Uprising, using a hoarse, haunting, bluesy voice reminiscent of Leadbelly.

With the rest of the programme, Melissa Laing is currently taping conversations about the politics and etiquette of round-the-table dialogue itself, Mark Harvey is leading a performance troupe that explores the ‘desirable’ mental and physical consequences of proximity to the colour turquoise (it seems like a send up of fascism), Ivan Mršić and a group of fellow musicians develop collaboration techniques for collective composing and improvisation, and Darcell Apelu will take a personal 2 hour tour through Patea (in South Taranaki) early next Saturday morning, talking about personal histories.