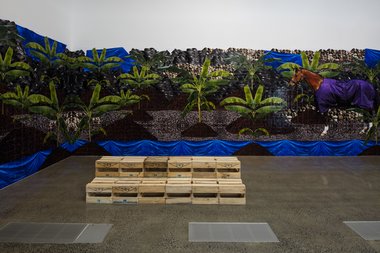 You soon realise that in fact there are really two works, placed diagonally opposite each other, and hinged in a central corner so that one wall reflects the other by flipping the photos over. Ostensibly, that is, because Lilo is rascally: she likes to move some elements around a little so that when you compare, the modifications (especially those along the horizontal axis) take some time to dawn. She teases you into paying attention and looking at the positions of her compositional ingredients closely.

Janet Lilo first rose into prominence five or six years ago as the maker of vibrant community-oriented videos where she interviewed various residents of South Auckland, out on the street, talking about a wide range of subjects. Massively talented as an empathetic interviewer, commentator, photographer and music editor tuned in to a multi-cultural (largely Pasifika/Maori) constituency, and for a while obsessively proficient in a vast range of social media (documentation) technologies (before she took a breather to concentrate on family life, while still researching), this Te Uru show is a sort of survey, though not strictly replicating earlier work - more extending a selection through further iterations.

At Te Uru, she has four display spaces, a little window gallery viewable from the footpath, and three large rooms on two of the exhibiting floors. The title of the show, Status Update, is a clever pun where artworld careerism is with tongue-in-cheek mixed with social media home page formalities. There are three installations and one room with three separate works. None of the six artworks is given a title /materials label.

I tend to think that Lilo, like other artists such as say, Lisa Reihana, is at her best working with moving image projects, not static photographs. Despite this, the highlight of the show is the immersive (but beautifully subtle) stationary photo-montage installation on the upper floor. There are four mural-like walls - made from ten thousand 4” x 6” butted together photographic prints sourced from Google and modified - that you study from beer-bottle crates serving as seats.

You soon realise that in fact there are really two works, placed diagonally opposite each other, and hinged in a central corner so that one wall reflects the other by flipping the photos over. Ostensibly, that is, because Lilo is rascally: she likes to move some elements around a little so that when you compare, the modifications (especially those along the horizontal axis) take some time to dawn. She teases you into paying attention and looking at the positions of her compositional ingredients closely.

Comparing these two ‘abstract’ and hinged, decorative works, they both have stretched-out blue tarpaulins, stone walls, mounds of humus and squelchy puddles of sticky mud. However one has a horse, rows of stacked tyres and interspersed stalks of banana leaves; the other - instead of these - has regularly spaced bunches of green bananas. Careful studying of these flattened image banks to discover this separation takes time, but is immensely rewarding.

Next to these Gallery Two friezes, on the same floor in Gallery Three, is an installation of ten groups of printed out Instagram photographs. There are about a hundred in each, and they are positioned on eight narrow stacked-up shelves. Because they are organised in pairs, triples, quadruples or ‘quintets,’ you can make comparisons within each set.

This rather overwhelming project seems to allude to her earlier projects such as MyFace (2009) but is less exclusively focussed on selfies. Along with four small videos of cartoony drawings, all sorts of printed images (a huge range of subject-matter) have been downloaded and sorted; they look like a contemporary version of Polaroid from the mid 80s. This comparison is even more pronounced in the Instax drawing window display by the front entrance, where the images look fiddled with, seemingly the result of some cleaning substance like bleach so that the ‘subtraction’ ends up creating small and unique abstract linear configurations. (She may have been thinking about artists like Lucas Samaras, who in the seventies investigated the materiality of the Polaroid.)

Downstairs in Gallery One on the middle floor, one work is about Google providing generalised visual ciphers for an aged or dying individual’s private hobby (such as fishing) and placed on the door of their bedroom in a resthome. Another is about email, an exchange between the artist and another individual declaring affection or love and transmuted into white neon text as high art. The third is about the artist providing entertaining textual and scary visual imagery for a piece of music (DJ Snake’s Middle, featuring Bipolar Sunshine) by finding online unusual fonts for each sung word, and mingling them with catastrophic (kaleidoscopically split) war footage found online. It is far superior to the inane twerking seen on the original youtube video.

The music is heard on headphones placed on three benches while Lilo’s mesmerising video is projected on the floor in between. Despite the sinister war images, the sound and energised texts make this last work very physical and catchily enjoyable, making it the closest thing here to some of Lilo’s remarkable early videos such as those on her Interface Project. Those endeavours make one wonder if perhaps this artist should really be working in public television as a producer and journalist, so wide ranging are her communication skills and insights. It’s awful to say but Lilo deserves an audience much wider than what the art world (or even various online streaming venues) can offer. Live or edited action from mainstream channels on screens in household livingrooms for starters; bigger than John Campbell.

The accompanying Status Update book is good because of the varied written (very informative) contributions from Ioana Gordon-Smith, Monique Redmond, Caterina Riva, Ema Tavola and Nina Tonga, but the images disappoint because the dynamism of her moving image /aural material is inevitably lost. And there are aspects of this book I wonder about. In parts it is too gushy, too fangirl. I don’t want to rain on these excellent writers’ parade but I wonder if this publication will hold up in five years time. It is so adoring of Lilo it is appears to be a satire of clubby artworld publication processes, where the cult of the personality and the surrounding social cannot be separated from the work itself, where Lilo’s character traits are merged with uber-numerous friends and kissykissy niceness. And although Ioana Gordon-Smith in her introduction says the merging of Lilo’s personal life with professional practice is deliberate (not ironic in either publication or exhibition) and (elsewhere: the promotion) that this show is pitched to ‘real’ people, I think that is a naive mistake. While Lilo has buckets of charisma and is incredibly gifted, the book is so unrestrained in its enthusiasm its tone often seems excessive. It may date. We’ll see.

Here is a beautifully crafted, perceptive article by Lana Lopesi on the book. http://pantograph-punch.com/post/janet-lilo-status-update

Here is a beautifully crafted, perceptive article by Lana Lopesi on the book. http://pantograph-punch.com/post/janet-lilo-status-update