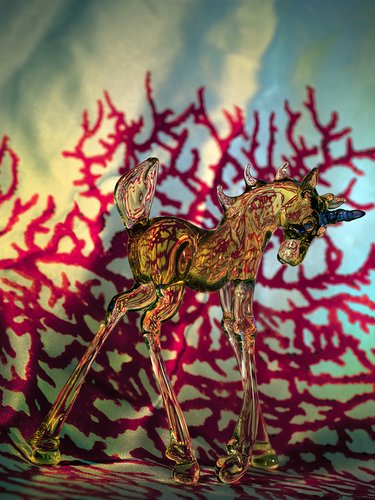 When you look at these glass forms closely there is a surprising amount of variation in the reflected and refracted colour, with Pardington often controlling the light in a very concise manner. Sometimes the mythical animal's protruding horn has its own glowing hue, different from that dominating the edges of the transparent glass forms.

This exhibition moves away from the popular touring show, A Beautiful Hesitation - that is about to finish at Auckland Art Gallery - into a new series that continues Pardington’s growing interest in colour and lighting effects; as is obvious in Hesitation’s most recent ‘Vanitas/Nature Morte’ photographs.

While not so overtly theatrical the new works - featuring glass unicorns set up with fabric backdrops - are very decorative; seductive with their bright colours and pattern. While Andrew Paul Wood has written an extremely interesting essay for the show about the historical meanings associated with glass unicorns, the photographs are formally beguiling and very physical, especially those in the largest of the three edition sizes.

In a sense the work (if about anything) is really about light, and the artist exploring its effects (refraction, reflection and distortion) on and through sculptured glass and filmy (or thicker) fabric - via front and back projection. There are six works in the large downstairs Starkwhite space: three middle-sized framed photographs on one long wall, and two large ones on the opposite plane. One other work is on a short wall near the office. The moods vary from chromatic exuberance to (using dark blue) melancholy and forlornness.

As visual /conceptual statements these photographs are a bizarre concoction, all sorts of elements strangely combined. One work, Flora_Unicorn, has hints of Salvador Dali with its pink and caramelly coloration. The fact that many of these unicorns have long legs links them to Dali’s 1948 painting Elephants with its pachyderms having absurdly spindly teetering legs. There is also a tip of the hat to Ruth Watson, to her nineties photos and lightboxes, with their glistening ceramic animal ornaments and very considered backdrops.

The five largish works on the long walls have considerable impact, White_Light_Unicorn featuring caressed brushed paint that seems to be swirling inside the milky glass unicorn’s translucent mane and prancing hoofless legs. With the clear transparent unicorn of Sanguine_Unicorn, the suspended backlit backdrop seems to be a tree of crimson coral or a bush with arterial branches. Its rippled glowing red lines, condensed and split up in the delicate equine form, bob about like a flapping banner, the sharp red forms convulsing in the yellowy-white field.

When you look at these glass forms closely there is a surprising amount of variation in the reflected and refracted colour, with Pardington often controlling the light in a very concise manner. Sometimes the mythical animal’s protruding horn has its own glowing hue, different from that dominating the edges of the transparent glass forms. And with the fabric, there is the tension between the backdrop that is parallel to the picture plane and the same patterns (often roses or planets) extending out distorted along the base that is at rightangles to the camera lens. Thus distortions within the glass (via refraction) are compared with those of the background (via perspective) outside it.

This work is an interesting development for Pardington. If you look at the direction of her practice over the last three decades her use of colour now - though not abruptly sudden - is garish and so, strangely shocking. Yet it is ‘smart’ garish - with purpose. It’s controlled vulgarity as kitsch that has optical preoccupations, and works especially well with the large prints. In your face, but intriguing.