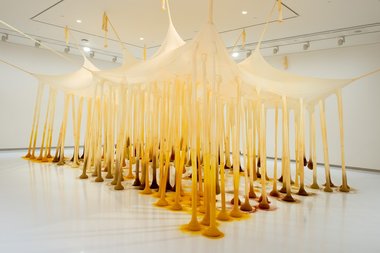 The olfactory is a crucial component within the visitor experience. With Ernesto Neto's room-sized installation of a Lycra meshed grid with suspended testiclelike appendages containing spices such as turmeric, cumin, cloves and ginger, all of which on impact have left powdery yellow ‘splashes' on the floor, the haunting aroma from this elongated translucent ‘forest' stays with you throughout the rest of the show.

The sensation of smell and the mental envisaging of taste are conspicuous elements in Space to Dream. Spices play a key olfactory role in the installation of Ernesto Neto, as do herbs sewn into perforated pockets inside the droopy eyeless hoods of Lygia Clark, while the giant unravelled tongue protruding from the gaping ‘taco’ mouth of Maria Nepomuceno’s colourful floor sculpture seems to consist of mounds of Jaffas, other assorted orange lollies - and bubbles.

The olfactory is a crucial component within the visitor experience. With Ernesto Neto’s room-sized installation of a Lycra meshed grid with suspended testiclelike appendages containing spices such as turmeric, cumin, cloves and ginger, all of which on impact have left powdery yellow ‘splashes’ on the floor, the haunting aroma from this elongated translucent ‘forest’ stays with you throughout the rest of the show. Lygia Clark‘s project on the other hand is to immerse the visitor in a controllable state where through carefully constructed clothing some sensations (like sight) are denied and others (like aroma, tactility and sound) are introduced, enhanced or discovered.

The status of smell adornment is a factor in the first video experienced in the show, Uruguayan artist Martin Sastre‘s satirical commercial being presented in the foyer next to the entrance desk, and promoting a luxury scent for men. U from Uruguay is set in a state owned bank in Uruguay where an opulent bottle is kept in a safe that is opened by the masked, dancing and stripping artist. This amusing advertisement also features the Uruguayan president José Mujica, a man admired for his altruism and donations to charity. Mujica is seen collecting flower heads to be used in the rare perfume and Sastre organised an auction of one of the purple glass bottles to raise money for a national fund for contemporary art.

Looking at the phenomenon of taste as suggested by the exuberant Maria Nepomuceno textile and bead work, the tangential metaphorical dimension that exists by being in an art gallery is pushed further and more specifically in Jonathas de Andrade‘s 40 nego bom é 1 real (40 Black Candies is R$1), a two part painting and text installation in a long corridor. The project examines the hierarchies and inequalities of the labour force that harvests bananas that end up in popular dark sweets sold on the street, and exudes irony, mocking the promoted appearance of industrial harmony and peaceful cooperation by methodically setting out specific details of exploitation.

In The Laughing Alligator, Juan Downey‘s late seventies anthropological video on the Brazilian/Venezuelan Yanomami Indians, we are introduced to another edible banana product , a form of ‘cannibalism’ where the natives mix into a banana soup the crushed burnt bones and ashes of their dead, to be consumed by family members as a means of perpetuating the dead person’s soul. It is as if the community is being materially recycled through successive lives.

Monuments, the small bronze sculptures of Argentinean Eduardo Navarro consist of twenty-nine cast walnut shells scattered on the floor. The two bronze halves of each are joined and securely sealed, serving as time capsules - the contents known only to the artist and their burial sites known only by those he has asked to bury them. The contents might be edible, but probably not. We have to speculate: there might be diminutive photos, texts or recordings inside - any items of historic or family reference at all; contained within the wrinkled bronze skin.

We will look at the notion of confined containment further in Part Three.