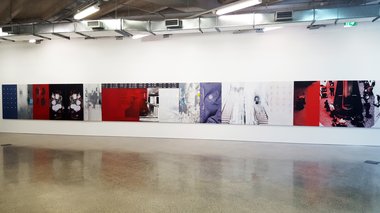 The work plays on ambiguity and fuzzy definition. The featured grid has twenty apertures, but the panels number nineteen. The ‘flat' abstractions after a while start to look vaguely architectural, as if referencing a murky haze that passengers travel through, intermediary zones that dissolve time and unite globally distant sites fore and aft.

Ron Left
Painting and Time: The dynamic of the actual and the virtual

For this exhibition by doctorate candidate Ron Left we have a fifteen metre painting of nineteen butted together panels on Gallery One’s largest wall, and a thesis available for public scrutiny, kept for security in the adjacent office. My thoughts here are about the former rather than the latter (an investigation into Deleuze‘s enquiry into time and related exploratory work by other philosophers), assuming - as I am - that (generating) intellectual underpinnings can be separated from the results of the practice itself: ‘results’ being broader and more open ended.

Left‘s ‘visual’ work fascinates because of its length and linear, comicstrip-like panel rhythms, its use of airport imagery to allude to time, and its synthesis of ‘brusherly’ acrylic painting with digitally printed photography. It doesn’t need to be seen as an ‘illustration’ for an elaborately worded explanation, in order to be enjoyed or pondered over. It is an intriguing work on its own, without an accompanying exegesis.

The painting’s sequence of nineteen aluminium panels, as you can see by the images, is varied in approach. Some are dominated by an aggressive range of colours, including five sections with hot reds, seven with pale greys and two blue greys. Two have flat picture planes like rectangles of wall, bearing 5 x 4 grids of holes as if a board game or switchboard, but with plastic convex surfaces within the apertures.

Others revel in paint handling, with qualities like those presented by Hans Hofmann or even Francis Bacon, and pale renderings of architectural space as if by Luc Tuymans. Painted images of objects such as sunglasses or shoes seem to reference Jasper Johns or Ross Ritchie, while the use of receding airport imagery such as luggage claim belts and escalators appear to reference moving image artists like Bill Viola or Jean-Luc Godard. It may be highly cerebral in its planning, execution and philosophical underpinnings, but this painting / photographic suite is also visceral, being emotional with its manual signifiers and exciting in its multitude of art historical references.

Movement and Time are directly referenced with the rotating machines that transport (vertically) arriving passengers and (horizontally) disembarking luggage, and a split-flap arrivals noticeboard that extends over the top of four panels. Finality in the form of Death has a distinctive presence too, with the mirrored images of a travel bag passing through an x-ray machine like a coffin containing a skeleton.

Left’s work plays on ambiguity and fuzzy definition. The featured grid has twenty apertures, but the panels number nineteen. The ‘flat’ abstractions after a while start to look vaguely architectural, as if referencing a murky haze that passengers travel through, intermediary zones that dissolve time and unite globally distant sites fore and aft. And although the elements of tachisme Left presents make an eccentric (but logically satisfactory) partner for the air travel components, say time travel swooshing art history back sixty years, the result is an unexpected sensuality.

While it is obvious that many of the panels can be enjoyed in isolation, it is the cumulative effect of them all squeezed together in a line that makes this painting compelling, along with its meticulous craft, its physicality and rhythms, and the evocative power of its carefully chosen repertoire of images. It is a shame it wasn’t up longer, for it deserves to reach a wider audience - whether those viewers be interested in Left’s thesis or not.