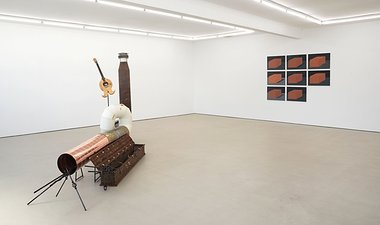 Many of these works can be visually (not ideationally) linked to various art historical movements, Enberg here to say Surrealism and Armanious to Arte Provera, while the title is a beautiful, poetically multi-layered phrase alluding to tactility, stimulation, biology and sci-fi.

Coincidentally on at the same time as the Christina Read curated video show, The Brain, at Te Uru, Touch your Brain is an exhibition of two sculptors and a painter (two works each) linked by a humorous sensibility that is not ‘in your face’, but droll: amusing, but restrained. Many of these works can be visually (not ideationally) linked to various art historical movements, Enberg here to say Surrealism, and Armanious to Arte Provera, while the title is a beautiful, poetically multi-layered phrase alluding to tactility, stimulation, biology and sci-fi.

Nick Austin‘s painting with eight panels, presents a suite of near identical images of an empty cardboard box, like that which you’d buy new shoes in. Each image is deliberately ‘incomplete’ in terms of layered scumbled glazes that set up the illusion of depth and three-dimensionality. Some of the planes of the box in each permutation ‘need’ further work and so ‘finished resolution’ is withheld. Negative Production (the title) means potential denied, as a means of making a new positive, once perceived. It alludes to the brain as a receptacle for stored information and also as a generator of imagined possibilities - as shown here.

Austin’s other contribution is a painting of a lower leg with linear motifs peeking through layers of thin pale paint. This Erased Tattoo (in its production process) seems to refer to coloured inks that if unsealed, keep resurfacing through covering layers and are difficult to block out. It points out witty parallels between ink use in flesh or on canvas, and skin graft versus acrylic paint skin.

Hany Armanious usually shows at Michael Lett. As a guest exhibitor at Hopkinson Mossman, his two works, like most of his practice, focus on explorations around the methodology of polyurethane casting. One is a cast (presented as a very big lumpy clod of earth) of a hole dug in the ground, a cousin to the ‘negative/positive’ processes set up with plaster by Rachel Whiteread - but with no spatial relationships between solid objects. The mound of crumbling dirt (it has stuck to the surface of the polyurethane) looks like it has fallen off a Council roadworks truck.

The other work from Armanious is an L-shaped section of cast wall that looks like soft bisonboard pock marked with scratches and fortuitous indentions. Echoing the shape of the large Enberg sculpture in the same room, it’s like a seriffed letter in reverse, perhaps cut from a school noticeboard which once held paper messages and drawing pins, the letter bringing in another level of self-reflexive wit while alluding to a rectangular planar wall corner.

Being slyly subtle, these works are pretty extraordinary, but the real star of this show is Oscar Enberg‘s Imagination Dead Imagine (lilt for tenor and Jean Arp electric guitar), a strangelooking hybrid sculpture that with its looping flue, cowl, galvanised chimney, wicker basket and assortment of ornate fire pokers, seems to humourously comment on the ontological properties of music production - the process from say a reproducable written notation to repeatable individual performances of organised sound.

The wrought iron pokers going in the end of the five-coloured, tubular configuration, seem to be carrying musical clefs as if they were stave lines and signs from dismantled sheet music that eventually reach the far (cowl) end of the chimney to emerge into the air as auditory sensation. It is as if the curled over hollow sculpture were an instrument in itself designed to accompany the ‘moustached’ electric guitar that references Jean Arp, and the saxophone mentioned in the title, and that the written formatting structures - notational conventions, not any individual notes - generated the actual music experienced. The over-arching references to the brain in the title might allude to the pleasurable sensations caused by music, and their emotional power.

Apart from how one interprets this very unusual sculpture, Imagination... seems (in typical Enberg fashion) to be crammed with references, ranging from Beckett in the title, obviously Arp and Parekowhai with the guitar,and maybe Max Ernst’s The Elephant Celebes with the flue. There is also the long wicket basket, which perhaps references Duchamp’s Three standard stoppages. The framed lithograph on the wall (Eléphant de Triomphe or Parisian Heat Death) seems another variation of the same theme, though a more pronounced look at systematic heating up and cooling down. Overall, a fascinating, refreshing exhibition.