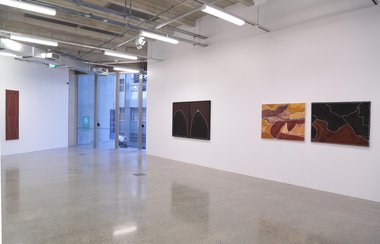 These abstracted landscapes (into which ancestral narratives are embedded), and diagrams presenting symbolic mythical motifs, are made with various charcoals, ochres, and clays from the region. They are carefully devised to accentuate the dry matte earth, often with powdery shapes bordered by lines of white dots - and always scrupulously avoiding sheen. The texture and surface quality of the granular crumbly pigment is a crucial aesthetic element.

Seven indigenous north Western Australian artists here present a baker’s dozen, a selection of paintings from the Gija community who live in the Warmun area of the Kimberley region. Regular visitors to Tim Melville‘s gallery (now in Newton) will probably be familiar with much of this work, for he has helped organise this display, approaching lenders, and I imagine, curating it with Huddleston and Cunnane. Here, in the spacious Gallery One of St Paul St Gallery, the presentation is exceptionally elegant, the vertically aligned works in particular sympathetically resonating with the raw concrete columns and Brutalist ambience.

These abstracted landscapes (into which ancestral narratives are embedded), and diagrams presenting symbolic mythical motifs, are made with various charcoals, ochres, and clays from the region. They are carefully devised to accentuate the dry matte earth, often with powdery shapes bordered by lines of white dots - and always scrupulously avoiding sheen. The texture and surface quality of the granular crumbly pigment is a crucial aesthetic element, and although the various works have a lot in common, each of the contributing Aboriginal artists seems to have a distinctive style, a comparatively unique approach to image making.

Shirley Purdie’s Gija Kinship (2015) is a painting of quiltlike curved rectangles (like inverted fish scales), gorgeous pulsing colours arranged in two undulating seven by seven grids, separated by a vertical line in the middle. The aligned blocks of warm chroma are thrilling in their dense (but controlled) saturation, like rows of wobbly houses on the hill gradually ascending vertically, being less stark or austere than the rest of the show. Gordon Barney’s Gurndalngany (2012) has a similar treatment of steep space, flipped up along the vertical stretcher, and although similarly split in half, shows two breastlike brown hills - with what could be a dwelling on one, seemingly in place of a nipple.

Instead of being divided horizontally, the thin David Cox painting Sing Out Spring - Yiyili Country (2013) is split vertically into two stacked up panels - one above the other. The descending lines from two balls at the top look like oscillating sound waves, or strings from two inverted yoyos, giving this work - now owned by the Chartwell Trust - a delicate Paladino-esque quality. It might represent two hills and two creeks: an aerial view.

Another work with pronounced affinities to maps, and unusual because of its use of thin brusherly paint, is Churchill Cann’s Spring Creek (2013) with jagged interlocking shapes that can also be seen as landscape forms viewed from above or at a three-quarter angle. Cann’s works seem overtly topographic, and intriguing because of that, with sensitive paint application built into their design.

The paintings of Mabel Juli are focussed on the night sky and narratives involving the moon and four-legged stars. Here the symbols (painted in white ochre and lushly bordered with white dots) are presented in iconic simplicity in the dark grey heavens, with no trimmings that allude to a story line. They are almost like a banner or declaration in their matter-of factness; a setting up of a scene for an impending story.

Phyllis Thomas and Lena Nyadbi paint in pale calligraphic strokes that in one case tends to link to together graphically to form a ribcage or spiralling twister, and in the other - with its spearheads and fish scales - marks that remain discreet and not touching, in clusters or clearly defined groups. The repeated lines tend to be directional and decisive, with a holistic inclination that is quickly graspable, compositionally.

All these paintings are immediately identifiable as Aboriginal, with their distinctive colouration, dry pigment and characteristic motifs, yet they mostly are not lush, cloyingly pretty or densely ornate with complex patterning - as some can be. Judging from this selection anyway, Warmun works tend towards the minimal and dramatic, and are prone to understatement. A nice surprise from St Paul St.