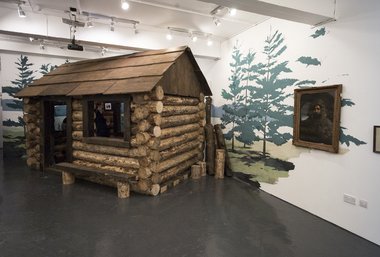 What is curiously absent from the installation is any direct evidence of a specific human occupant. It's at this point that American artist Mark Morgan Dunstan's science-fiction analogy becomes illuminating. Citing both Kubrick's film and Roland Barthes' essay ‘The Nautilus and the Drunken Boat' published in Mythologies, Dunstan addresses the idea of the Cabin itself as a character; one which also throws the dynamic of the frontier explorer on its head.

Developed over the course of a 6 week residency at DegreeArt Gallery on Vyner Street in Hackney, Lake Island is the collaborative brainchild of Martha Beaumont, Estella Castle, James Mansfield and Mark Morgan Dunstan; four London based artists who met as students at City and Guilds of London Art School. On balance, Stanley Kubrick’s science-fiction classic may not be the first point of reference which comes to mind when viewing the exhibition, however when I speak with one of the artists on a cold and wet First Thursdays opening night, it’s this film which stands out as a way into the complex working process behind the installation.

Lake Island as a body of work is dominated by a log cabin, built by the artists over the course of their time at DegreeArt. While images shared online and through social media hint at the physicality of the process, it’s only once you are standing next to it that you appreciate that these guys actually built a full sized, “functional” (if clearly draughty and somewhat impractical) log cabin out of timber sourced in part through a cleverly orchestrated crowd funding campaign. Alongside the cabin are a series of mixed media works from three of the artists involved, Beaumont, Castle and Dunstan. Within the cabin itself are a further four works by Beaumont, which sit amongst a collection of scene appropriate ephemera. The installation itself is a shrewdly designed mechanism for the artists to explore their particular mediums separately while still adhering to the larger framework of the exhibition with the sort of cohesion that many other group shows often seems to lack.

In an interview segment on the gallery’s site, Beaumont cites the Richard Hamilton retrospective at Tate Modern from earlier this year and in particular the work Lobby (1985-87) as influential. On reflection, Hamilton’s “‘world within a world’ and his play on image versus the space the viewer is situated in” as she describes, it is another useful way to view the artists’ interaction with the log cabin. Inside the structure, there is all the evidence of occupation and habitation, while the works outside speak to a more complex and obscured narrative of experience and observation.

What is curiously absent from the installation is any direct evidence of a specific human occupant. It’s at this point that American artist Mark Morgan Dunstan’s science-fiction analogy becomes illuminating. Citing both Kubrick’s film and Roland Barthes’ essay ‘The Nautilus and the Drunken Boat’ published in Mythologies, Dunstan addresses the idea of the Cabin itself as a character; not just as a vessel to project the personalised narrative on (either that of the speculative inhabitant or the viewer’s own), but one which also throws the dynamic of the frontier explorer on its head.

In Barthes’ essay, he comments:

“…the ship may well be a symbol for departure; it is, at a deeper level, the emblem of closure. An inclination for ships always means the joy of perfectly enclosing oneself, of having at hand the greatest possible number of objects, and having at one’s disposal an absolutely finite space. To like ships is first and foremost to like a house, a superlative one since it is unremittingly closed, and not at all vague sailings into the unknown: a ship is a habitat before being a means of transport.”

The assumption then that the cabin is representative of a need to explore, to break boundaries and uncover new territories is here challenged, and suddenly becomes an exercise in withdrawal and retreat, more akin perhaps to the sort of ‘escape to the country’ narrative of the defeated city dweller worn to shreds by metropolitan hustle and bustle than the intrepid adventurer. It’s a duality that is apparent even in the title Lake Island. This geographic separation, the lake as an island, the island as a lake, both within a wider whole presents a space somewhere in between where the concerns of the artists have room to negotiate with each other.

By beginning with the narrative of an individual, creating the cabin and the surrounding environment, and then removing all traces of that specific narrative, the artists have created a situation free of specific connections. The viewer is able to access these interstices and form new narratives independent of the original.