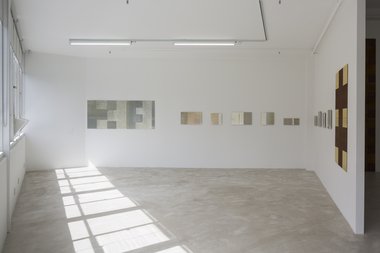 Because he has been exhibiting cross paintings for too long now, the excitement of this Bambury show comes from the much smaller 'Fourteen Mirror' paintings and the 'Seven Days' suite. One exploits corrosives on aluminium panels and gold and silver leaf, pocked and pitted sections covered with acrylic; the other coloured pigments and churning chemicals on brass - in elegant barlike arrangements.

In this exhibition of recent Stephen Bambury works (twenty-nine 2014 paintings and one 2000 sculpture) the four main spaces in Trish Clark’s gallery are shrewdly allotted certain visual themes, such as compact crosses of simmering rust within corners of glowing orange, rectangular plates of wispily streaked aluminium, or logolike configurations of small coloured oblongs.

While overall there is too much work here - the cross paintings could all have been left in the studio and the rest of the show would have made an extraordinary, more adventurous and dynamic presentation - Bambury has clung to his ‘brand motif’ and architectural intervention (obviously to him irresistible in a new Clark space), rather than solely showcase his talent as planar surface innovator, a skilled manipulator of markmaking liquid chemicals and blended pigments. The cripplingly cramped hang of Fourteen Mirrors in the triangular window gallery and office would have been avoided if he had spread them out instead in the central square room on their own.

Because he has been exhibiting cross paintings (in my view) for too long now, the excitement of this Bambury show comes from the much smaller Fourteen Mirror paintings (a version of Stations of the Cross with no crosses) and the Seven Days suite. One exploits corrosives (and perhaps heat) on aluminium panels and gold and silver leaf, pocked and pitted sections covered with acrylic; the other coloured pigments and churning chemicals on brass - in elegant barlike arrangements. These comparatively intimate and nuanced works completely upstage the physically imposing lines of crosses that stridently traverse or ascend whole walls.

In the Fourteen Mirror series, where the smooth aluminium plates have been divided up into squares or vertical rectangles, the aluminium bears iridescent streaks and fine wispy feathery traces. The composition is comparatively random and unstructured, with projecting ridges from butted up acrylic coated or metallic leafed panels acting as an interruptive foil. Some of these works, especially the smaller ones, need a lot of space so you can focus on the delicacy and evanescent texture of their relatively faint pink, yellow or grey marks.

I like the veil-like quality of these visually restrained works, their lack of obviousness as understated traces, their sense of drifting movement or blurry ripples, their lack of fixed geometric order or solid foundation. They also display a function as a ‘caressed on’, ‘stroked’ foil for the crumbly and shredded, shiny metal leaf. One is in the picture-plane surface, the other is on it.

The Seven Days paintings in comparison are luscious - overtly so. They have a richly decorative sensual colour that is mottled with internally undulating organic forms, found inside carefully organised configurations of four small rectangles. The saturated but modulated chroma is the type associated with ostentatious clothing or lavish furnishing, but here residing within tight, very simple formal arrangements that are often refreshingly asymmetric. Internally embedded within this colour are flaky textures often associated with leaves or bark.

These works lack the broach-like quality that some of Bambury’s small cross paintings have - an advantage. They obviously require a wall to trumpet the nuances of their complex shape, with its internal and external gaps, and don’t suffer from associations as potential fashion accessories.

Personally I think these two series (with their abandonment of religiosity) are more successful than anything else Bambury has ever done, the Fourteen Mirror works because of the (apparently newly) relaxed approach to composition, its open spontaneity mixed with optical discretion, and the Seven Days series because of the inventive dynamic of the four rectangles and the sumptuous richness of the agitated velvety colour. Fascinating and beguiling explorations.