Something is Wrong with This Picture

It's easy to regard Kalisolaite and Luke's works as being purely social commentaries. Even easier, that they are Pacific artists whose works revolve around the physical concept of home. Shows like 'HOME AKL' (2012) (6), curated by Ron Brownson and others, give the impression that Pacific artists are particularly obsessed with home, navigating their displacement and identity whilst trying to reclaim a lost culture through the forced confines of colonisation.

The 2014 Walters Prize exhibition is definitely vying for ‘most controversial’ art prize in New Zealand. Surely though, it is more than just the inclusion of intangible and socially centred works that is causing all the commotion? The tedious discussion over why Luke Willis Thompson, Kalisolaite ‘Uhila, Maddie Leach and Simon Denny’s nominated works are even considered art, borders on dull, if not irrelevant.

Why are these works so hard to swallow? Works of this nature are not new to art. If anything, the excitement revolving the Walters Prize is not that art modes are changing, but that the role of the audience is changing by having to rapidly adapt to disembodied art practices. The independent jurors for The Walters Prize have presented us with a selection that certainly stretches the audience; a selection of the “crème de la crème” of New Zealand’s contemporary artists. I would like to perhaps challenge the selection as being typical of an institution that caters to specific stereotypes - concentrating on the Pacific Island descent contingent of the Walters Prize nominees - Luke Willis Thompson and Kalisolaite ‘Uhila.

What do you mean, We?, the show that that originally featured Kalisola’ite ‘Uhila’s Mo’ui Tukuhausia, posits a direct social question. We implies there are at least two parties - who exactly is the we? The exhibition, originally shown at Te Tuhi Centre for the Arts, Pakuranga, consisted of various artist responses to prejudice in New Zealand. Presumably the we in What do you mean, We? are the victims of prejudice and the other are perpetrators of prejudice based upon preconceived ideas of race, gender and class. The restaged version of Mo’ui Tukuhausia at the Auckland Art Gallery in 2014 is problematic. Allegedly patrons walk into the gallery and request to know the location of the artist so they can see the work.

I’ve seen ‘Uhila several times recently - once when he was in the Symonds St Starbucks, another he was walking down Karangahape Rd. He basically stays within a certain radius of the Auckland Art Gallery - so, if one really wanted to see him, it wouldn’t be that difficult.

Stephen Cleland (1) has stated that ‘Uhila is immersing himself in the homeless community. In doing so, he is attracting a small gathering of threatening homeless people within close proximity to the gallery. This seems kind of ironic given that the work is perceived to be about highlighting the existence of marginalised societies (2). It seems ‘Uhila is not necessarily trying to be authentically “homeless” or to live by the biased ideas of what homelessness is - he is a performance artist testing his physical and artistic stamina. If he should simultaneously point out the ludicrous nature of art and the audience, then that is a bonus.

Mo’ui tukuhāusia means to be absolutely stranded; to be left destitute and friendless (3). Although ‘Uhila is of Tongan descent and he has chosen to name the work with a Tongan language title, I get the impression that when the community is talked about in relation to artists of Pacific descent those artists are considered to be talking about exclusively Pacific concerns. Mark Amery’s review of Tonga ‘I Onopooni: Tonga Contemporary (4) notes that artist Lucy Aukofolau is “on her first visit home” - even Amery, who is a seasoned writer, has made this mistake of assuming that Tonga is Aukafolau’s home. Aukofolau was born and raised in New Zealand and is of British and Tongan descent. Tonga is her father’s home.

The relocation of Luke Willis Thompson’s Inthisholeonthisislandwhereiam has gained access to a much wider audience and is vulnerable to even more criticism than in its original inception. Since 2012, we have learned that it is Thompson’s family home - not that he actually lives there anymore. The 2014 version of this work seemed slightly more desolate although relatively unchanged with the exception of the kitchen oven looking a little worse for wear.

I initially encountered Thompson’s Walters Prize nominated 2012 work as a volunteer. I recall feeling like a voyeur and privy to the domestic secrets of a regular family. I didn’t view this house as decrepit nor was I aware of the implications that this kind of work had on its idyllic neighbourhood. Was it a stain on an otherwise pristine and economically plentiful suburb? John Hurrell’s original reading of the work (5) was very alien to my personal experience - for the clutter and frenetic physicality of such a dwelling is a common occurrence in Pacific households.

I questioned, as many did, whom this work was intended for? There was just so little information about the work’s conditions that I was struggling to come up with interpretations past the obvious readings of race and class - which is where the gallery information assists. The audience reading is left much to its own devices: “Thompson’s objects are often taken from sites of trauma or contain references to the artist’s biography, but these are rarely made explicit”, so the interpretation can only be based on assumptions and subjective experience. Thompson is actually inviting people to draw on their prejudices.

It’s easy to regard ‘Uhila and Thompson’s works as being purely social commentaries. Even easier, that they are Pacific artists whose works revolve around the physical concept of home. Shows like HOME AKL (2012) (6), curated by Ron Brownson, give the impression that Pacific artists are particularly obsessed with home, navigating their displacement and identity whilst trying to reclaim a lost culture through the forced confines of colonisation.

Brownson, in relation to this exhibition, said that ‘New Zealand’s contemporary Pacific art reflects many distinctive voices, stories and perspectives - it’s urban, biographical and affected by its grass-roots community.’ This kind of language predetermines an aesthetic value - urban, biographical, grass-roots. I can’t help but wonder if these themes are imposed or at the very least reinforced by the gallery’s prescribed marketing, for slogans like ‘New Zealand’s Toughest Art Prize’, coined by Head of Programmes, Zara Stanhope, do the works no favours. The Auckland Art Gallery, in this instance, through its campaign marketing tries to put itself in a position to be praised for enlightening us with these relevant social and economic concerns.

The curation of Pacific artists’ works in general, I find to be highly problematic, as the potential of the works are limited to the vision of the curator, which usually contains highly stylised ideas of Pacific-ness. True, there seems to be a strong interest within the Pacific art community in social practice, favouring the immaterial over the material, reflecting a concern with the economy and a critical view of the privileged position of materiality. However, the works selected for exhibition and the way they are presented, are consistently predetermined by people outside of that community, so how can thats be an accurate depiction of contemporary Pacific art? This surely will impact on how artworks are received and directly encourage a narrow, misinformed, audience reading.

This year’s Walter’s prize has felt curiously allegorical. Four contestants dancing variously around poles of displacement. Read as system, the ...

The suspense is over. <http://www.stuff.co.nz/entertainment/arts/10550882/Walters-Prize-awarded-to-Luke-Willis-Thompson> Congratulations to Luke Willis Thompson for winning the 2014 Walters Prize.

Great piece. Good thoughts. Perhaps we Pakeha are swallowing the 'Home' rhetoric being fed to us without interrogating it enough ...

Great piece. Good thoughts. Perhaps we Pakeha are swallowing the 'Home' rhetoric being fed to us without interrogating it enough - because that was exactly what was great about the Tongan show, that it unpacked that. So my job was to echo that curatorial intention - Calling Akofalau's trip as one 'home' arguably runs against that. While one could argue that one's father's place of birth is 'home' it's a labeling that I agree actually slims down what the complexity of feelings the artist in this interesting work is exploring. Appreciated the criticism - more please. (My bandwagon is that, if we can't be critical of each other publicly we are limiting our freedom)

The suspense is over.
<http://www.stuff.co.nz/entertainment/arts/10550882/Walters-Prize-awarded-to-Luke-Willis-Thompson>
Congratulations to Luke Willis Thompson for winning the 2014 Walters Prize.

This year’s Walter’s prize has felt curiously allegorical. Four contestants dancing variously around poles of displacement. Read as system, the questions presented by the works in various ways seem to respond to this tasty little quote from a recent Kuan Woods essay “…maybe you thought you were still looking at contemporary art—but actually art left the building quite a while ago and the artist is mostly using the real estate to work a gigantic production job of stabilizing an image of career trajectory in the absence of any social or art historical one”.

Leaving behind the notion of art for a second, the contemporary moment seems of primary significance in the selections made. Considered by Leach in terms of syntactical displacements in which the concrete disappears and lies silently on the ocean’s floor. Considered by 'Uhila as social displacement, the collision of incongruent, but crucially, entirely commensurate outcomes of our seemingly inescapable social reality – something about iPhones as congealed human misery. Considered by Denny as the displaced songs of a thousand techno-sirens, calling us to venture ever closer toward the shores of some or other promised land.

And if one is to accept this frame of displacement, the guile of Willis Thompson’s gesture and its ability to refract the battleground does lead to the conclusion, as Willis Thompson described in reference to his intentions, that perhaps it wasn’t necessary to see the other works at all. With a Copperfieldian slight of camera angles, Willis Thompson made the museum disappear.

Which draws me to the central theme in this composite-image – which I contend has not been fabricated with any particular regard for veracity – the role of cynical reason. Alternately described as enlightened false consciousness, the concept is multifaceted and could be characterised as the movement from cynicism as attempt to undermine ideology, to an ideological position in-itself, aligned with prevailing economic imperatives. It’s the morning you wake next to John Key as PM and realise it was precisely because of his ability to lie that you knew you could trust him.

And it is with this framework that inthisholeonthisislandwhereiam would seem to become legible. Its initial gesture is profoundly subversive and draws attention to the movement away from the location of power, opening the crucial space of cynical distance. The second movement is stabilising and reminds us of life, of inhabitation, it is personal, intimate, affecting. But it is the final movement which describes the instrumental foreclosure that grounds the work as both contemporary and as art - that is, we get dropped off at precisely the location the journey started from. 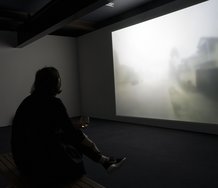 Louise Bennett
All At Once 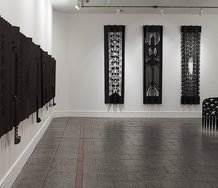