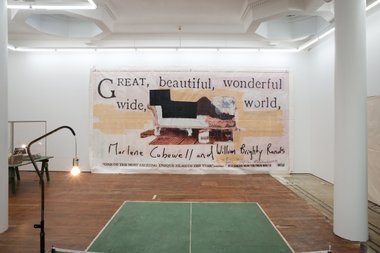 On the main floor, amongst the Budd works, is a Popular Productions hoarding - A60020.3004 untitled (great, beautiful, wonderful), 1993 - ostensibly advertising a film about the oft discussed ‘blonding' of Peter McLeavey's chaise longue. It is not about a particular film at all but in fact about notoriety and provocation as topics for generating social impact. ‘Spoken movies', shall we say, about the Wellington dealer's indignation.

Works from The Estate of L. Budd & Popular Productions

In its brand new space with its entrance in East Street, the third Michael Lett ‘iteration’, we find an intriguing selection of sculpture and wall works from The Estate of L. Budd on the main floor, and four Popular Productions videos below in the basement. Though one is a sampler from the eighties, and the other a taster from the nineties, there are expected overlaps (or continuums) that straddle/unite the two.

As with the earlier resin-coated collages of Merilyn Tweedie, we understandably find lots of blocked (or crossed) out words (or replaced ones) on the wall works from the eighties, an extension of the earlier feminist attack on language as a self-perpetuating patriarchal continuum, and a satirical revelling in textual ‘feminine hysteria’.

Budd’s use of a lightstand (PSI.100) as a tongue-in-cheek symbol of rational analysis - and lampshades in a box (FMSC50956.4012, untitled) as systems for intellectual focussing - is accompanied by disruptive ‘blonding’ (using thin white paint) as a form of blocking access to information underneath and a snigger at the aspired purity of modernism and the white cube.

It is interesting to compare ideational structures between the items on the two floors. The Budd Estate works (all clinically given numbers to avoid words while mimicking registrational procedure) are precursors of what is to come. Referencing various multiple personas - either sequentially or simultaneously - can be seen in DBb50855.3002 (untitled), 1999, for sequence, and EE5.500.1, 2010, for simultaneity.

The first is a seven metre long, unfurled blind, most of which is an expanse of black paint, referred to in pencil scrawl as ‘the ocean of transmigratory experience’. It alludes to reincarnation. The second is a set up table tennis table with net and bats, part of a 2010 charity benefit tournament. A jar of balls seems to reference alternating serves and the toing and froing of many lives at once. Vitrine (n.d.) is similar, a display case of speakers and monitors symbolically representing the activities of several individual lives at once.

On the main floor, amongst the Budd works, is a Popular Productions hoarding - A60020.3004 untitled (great, beautiful, wonderful), 1993 - ostensibly advertising a film about the oft discussed ‘blonding’ of Peter McLeavey’s chaise longue. It is not about a particular film at all but in fact about notoriety and provocation as topics for generating social impact. ‘Spoken movies’, shall we say, about the Wellington dealer’s indignation.

The basement has several Popular Productions videos which can also be seen (one at a time, of course) on the Circuit website. However experiencing them in the Lett basement environment is very different, for the four works, of varied duration, cannot be aurally isolated. They interact all together, with their sound uncontained - constantly recombining as different films (some with silent periods) unpredictably fall in and out of synch. The plasma screens are mostly positioned far apart, being located around corners where narrow corridors with white painted brick walls intersect, yet two particular locations provide vantage points for two pairs of works: Epicene / Story of Wonder What; and Utopia / Dora’s Lunch. Looking at any one screen means that you are bombarded with soundtracks not only from the front but also from behind or the side.

The works are infused with a calculated mayhem (that sometimes incorporates its opposite, inertia), a Dada playfulness that tries to prevent any pattern forming or consistently predictable expectation. Much of it is anti-language, aimed at destroying attempts to make sense of the mutilated, erased, blocked out, scratched over, misspelt or ungrammatical text. Eventually the reading of these ‘attacked’ word sequences, interspersed with oddly angled, refilmed portions of home movies or old Hollywood films, becomes pleasurable. The disruption becomes funny and less optically jarring. You get used to it.

No longer agonistically bruising and irritating, this attack on phallocentric mastery paradoxically becomes a display of a new virtuosity with the creation of a new nihilistic (but consistent in spite of itself) lexicon - achieved through mischievous humour, formal experimentation, the investigation of certain theoretical or psychoanalytical notions, and pigheaded repetition: all subtly tied in with the antecedents shown on the floor above. A logical extension.