Exploring the Machinery of Mind and Body 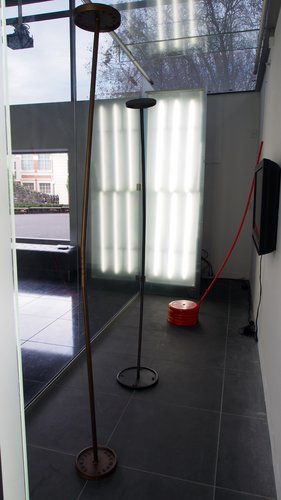 Although Window can potentially be a difficult exhibition area to work with in that it is a narrow and enclosed space, Valentine has effectively negotiated its parameters to create a stage-like space upon which our societal behaviours are enacted and starkly placed for critical insight. She explores spatial relationships both within the installation and those between the viewer and the viewed object.

Henry Miller: Our own physical body possesses a wisdom which we who inhabit the body lack. We give it orders which make no sense.

The body as a symbol of perfection, rigorous discipline, and presence/absence in society is the focus of Hannah Valentine’s installation Racquet Service at the University of Auckland’s Window space. In a contemporary society driven by image aspiration, appropriation and construction, our body becomes a vehicle with which to project identity. Through combining man-made objects with technological media in a staged exhibition space, Valentine can be seen to explore the mind/body duality espoused by René Descartes’ theory that the body is merely an automated machine operating through a mechanical system of tiny fibres. If the body is in fact treated as a carefully operated machine run by societal drive, then to what extent can individual fulfilment be satisfied or be considered? Racquet Service is a striking exploration of the mental and physical characteristics underlying gym culture as ethos, expectation and everyday routine.

Valentine visually draws a link between classical notions of physical perfection and contemporary society’s appearance-driven individual exercise through two bronze replicas of dumbbells. In media and shape they immediately signify ‘exercise’ and ‘strength’ to the viewer: the bronze calls to mind either trophies or classical Greek statues of heroes, warriors, or athletes. Yet Valentine has manipulated the proportions of the sculptures, complicating traditional meanings. They are thin, elongated objects that are awkwardly bent in the middle, leaning to one side. Immediately they reminded me of Giacometti’s haunting sculptural works of isolated human figures: created by human hands, they suggest presence, yet this tangibility of existence is simultaneously undermined by their scale.

These dimensions form the crux of the power of Valentine’s visual display: strength is replaced with vulnerability, solidity with fragility, confidence with doubt. To the left of the space stands a modern and brightly coloured dumbbell, yet the weights of these have been removed and lay stacked on the floor next to the pole on which they should rest. Like the bronze statues, the dumbbell is unusable and simultaneously seems to demarcate human presence and absence: has it just been used? Or has it been discarded due to disuse?

The accompanying text for this installation states that these hand-made forms serve to replace the sterile environment of the gym, yet I would argue that they serve to underscore this sterility and in doing so, challenge and critique it. They are isolated objects whose lack of integration is emphasised by their relationship to their environment.

Although Window can potentially be a difficult exhibition area to work with in that it is a narrow and enclosed space, Valentine has effectively negotiated its parameters to create a stage-like space upon which our societal behaviours are enacted and starkly placed for critical insight. She explores spatial relationships both within the installation and those between the viewer and the viewed object. The glass plane prevents a personal and tactile encounter with the sculptural objects: as much as we’d like to, we cannot interact with them, and are left to simply observe and attempt to imagine a tangible, working reality for these objects. This disassociation possibly brings to mind the unobtainable nature of many fitness goals, or perhaps refers to the lack of social interaction between people within communal gym spaces and their disconnection from the physical reality of life.

The depersonalised ritual of exercise is underscored in the continuous video montage. There is a close-up of two hands moving a skipping rope in a circular motion upon which a Facebook home page screen is superimposed. A disembodied person scrolls through images of domestic interiors, food blogs, and travel photos. We are then shown a cup of coffee being made, after which the camera follows a solitary person entering and leaving a gym. And still the rope turns, a relentless circular motion that acts as a visual parable to Descartes’ postulations that the body is synonymous to a clock in its mechanical functions. Going to the gym is presented as being merely another part of daily routine. And this routine is, through the continuous scrolling through Facebook, another component of the self-curating of life that has emerged through the proliferation of social media.

The individual drive to seek fitness is, to a certain extent, a result of the societal pressures to present a constructed version of self through increased media. While the continuous streaming of the footage unfortunately detracts focus from the deftly sculpted bronze sculptures, the framing of the television monitor by the two sets of dumbbells anchors all components in a cohesive visual schema in which each component acts upon and influences reading of the other. As such, the isolated individualism hinted at through the bronze sculptures is reiterated in the video: the individual perusal of social media is a preamble to the solitary exercise undertaken in the gym. Both are symptomatic of the routine identity aspiration and construction of contemporary everyday life and both reveal the perceived duality between mental fulfilment and physical activity.

By combining sculpture and video material and maximising the potential power of the gallery space, Valentine explores the realities of a society in which the body is perceived as a vehicle through which the ritual duty of exercise must be performed in order to gain not mental enrichment, but social satisfaction.

Emma Jameson is the 2014 EyeContact Artists Alliance Writing Intern, a programme made possible with generous funding from the ASB Community Trust. 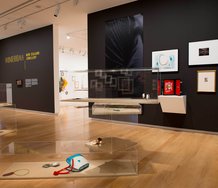 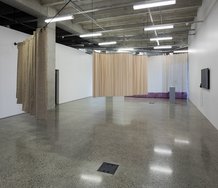 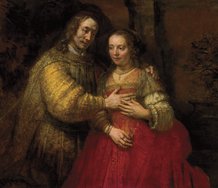 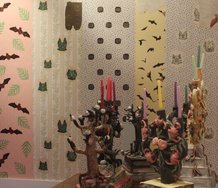