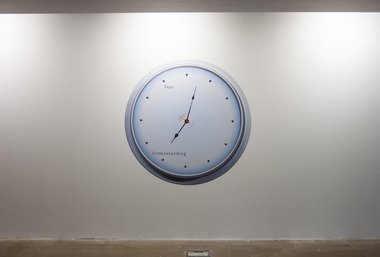 My overall impression of the Biennale is how different it feels to any other Biennial show I have seen. The smaller size, predominantly local focus (at least 10 of the artists are Romanian), and firmly political character give it a cohesive ferocity of intent which other more established Biennials sometimes shy away from.

The Bucharest Biennale was inaugurated in 2005 by Răzvan Ion & Eugen Rădescu, the co-founders of Pavilion Center and Pavilion Journal. Born out of a desire to present a physical projection of the academic aspects of the journal, the Biennale is now in its 6th iteration, curated this year by 21 year old Gergő Horváth under the title Apprehension. Understanding Through Fear of Understanding.

During the opening day press conference perhaps the two strongest sentiments which come to the fore are ‘struggle’ and ‘resistance,’ and over the course of the next four days, my mind keeps returning to these as the undeniably political character of the exhibition comes ever sharper into focus.

As an expat living in Britain, it’s difficult not to relate the theme of this year’s exhibition back to the stagnant and reductive political discourse which has increasingly gripped the UK since the recession hit. This was particularly evident when the UK Independence Party recently won seats in the European Parliament on the back of a campaign filled with racist, anti-immigration rhetoric, directed with particular venom towards the Romanian and Bulgarian communities in light of their recent ascension to full EU membership status with its open border arrangement.

The sheer number of baffled looks I received when colleagues heard I was going to Romania feels like a testament to the casual prejudice that the country faces, a sad fact echoed by local journalists I met during the course of my stay. The exhibition itself feels fiercely engaged with the domestic realities faced by people in both the host city and the rest of Romania. Răzvan Ion characterises the work of Pavilion as “15 years of resistance,” and during a panel discussion entitled ‘The Gramatik of Fear,’ he singles out Romania’s education system for particular criticism while emphasising the importance of education and mediation to this year’s event.

The main exhibition is spread out across four main venues in Bucharest, and features 19 different artists. At the same time, there are over 20 parallel events, talks and exhibitions associated with the Biennale running from May 22 until the end of July. These include events outside Romania in Zagreb, Croatia and Tel Aviv, Israel.

At the Romanian Peasant Museum, this political engagement feels particularly evident. Hungarian artist János Sugár’s installation takes the mounting public cynicism directed at politics in the 21st Century to task by subverting the pageantry of organised political leader’s debates to reflect the insidious political workings within the contemporary arts. Comprising five muted television screens showing debates from five different countries, subtitles running along the bottom of the screen in the relevant languages play off jokes, stereotypes and prejudices concerning the relationship between dealer and artist, the hierarchies of medium and gender inequality in the arts among other things.

In the same venue, Marilena Preda Sânc’s sculpture, Globe, a distressed and semi-obliterated globe nestled on a bed of bent and rusty nails serves as both a commentary on the current political landscape, and also a reflection of a wider history of conflict, particularly in Europe. Interestingly, the work was created in 1999, pre-dating the global economic recession, the Arab Spring and even 9/11, and yet the symbolic link with the present is inescapable.

Norwegian artist Bjørn Erik Haugen’s work Utopian Standard, a black banner with white text reading ‘We could, and we might,’ touches on the idea of fear as a malleable construct that is used to manipulate and control.

This idea of potential and dread can be seen elsewhere throughout the exhibition. The cynical Global Gold Insurance by Mihai Zgondoiu addresses the status of the artist in the 21st century and echoes both Sugár’s bitingly self-reflexive criticism and Haugen’s sense of precarity. Similarly, Arantxa Etcheverria’s sculpture The Wolf, an installation in the shape of an animal’s head made from polyurethane and metallic pins, speaks to contradictory notions of strength and death.

The works in the other venues are often equally pointed. At the Pavilion Center, the spectre of death is explored in Jan Kaila’s haunting series of portraits taken from three graveyards in St Petersburg and a fourth in Venice. The images, aptly titled Second Death, are collected from the tombstones in the Russian Orthodox and Roman Catholic cemeteries, and are shown here as two video projections with sound.

Across the gallery sits Raqs Media Collective’s piece Meanwhile/Elsewhere (Fear and Understanding); a large vinyl clock with ‘fear’ written at 11 o’clock and ‘understanding’ at 7 o’clock. Of any work in the whole Biennale, this speaks the most directly to the curatorial direction of the exhibition, exploring the relation between these interpretations of apprehension and the space between them that we occupy.

Stephanie Syjuco’s large installation at The Institute for Political Research, entitled Free Texts: An open source reading room takes up three walls in the upstairs mezzanine of this old University building. Here, Syjuco has wallpapered the space with posters bearing the title, author and a URL address of a selection of major written works, creating a sort of virtual library which addresses copyright in the age of downloading and file sharing. The artist also points to the environmental concerns of the work; specifically the attempts by some corporations to patent the genes of plants and animals (think Monsanto et al.).

My overall impression of the Biennale is how different it feels to any other Biennial show I have seen. The smaller size, predominantly local focus (at least 10 of the artists are Romanian), and firmly political character give it a cohesive ferocity of intent which other more established Biennials sometimes shy away from.

If anything, I would have liked to have seen an even greater degree of overtly political discourse, a more explicit critique of those things spoken about on the opening day. However that could be due more to my own fatigue with the increasingly divisive and sometimes outright xenophobic political debates in the UK.

When I returned to London after my stay in Bucharest, curator Gergő Horváth very kindly agreed to answer some questions via email about the Biennale.

To start with, could you tell us a little bit about your relationship with Pavilion, and how you came to be the curator of the 6th edition of the Bucharest Biennale?

We worked together before on different projects, so we knew each other for some time. There were talks since last year about me possibly curating the biennial and I was very excited when it actually came down to it, because it was a great opportunity and a big learning curve.

I was surprised when during the Press Conference, it was announced that the work BB+ by Cezar Lazarescu & 1+1 had been called off by the company that was contracted to be a part of it, in part because the work was viewed as being critical of the government. The organisers seemed less surprised however, almost viewing this as the kind of problem they would expect to face. How indicative do you think this is of the difficulties faced by artists in Romania?

These things don’t happen too often, but there were some similar situations in recent years. Most people in Romania aren’t very familiar with contemporary art and it being a very unstable country you always prepare for the worst. When situations like this arise you are annoyed, yes, but not surprised. People don’t see critique as a generator of progress, although it is the first step in mending a broken system.

How do you view the current state of the Visual arts in Bucharest and Romania as a whole? What challenges is it facing and how do you see the Bucharest Biennale fitting into this dialogue?

This past month I’ve seen a lot of activity and a lot of new collaborations, which are maybe a bit uncharacteristic of Romania, so there are definitely some changes going on, which this scene is in need of. The Bucharest Biennale was always a space for experimentation and progressive thinking. As I see it, since Răzvan Ion and Eugen Rădescu started Pavilion magazine, the biennial and the art center it really helped to put Romania on the global contemporary art scene’s map and it made way for new ways of thinking and generating projects, so I am very happy I could be a part of it in some way.

Can you say something about the areas of interest or different influences that directed how you personally approached curating the Biennale?

I wanted to choose a theme and do the biennial in a way that if you weren’t very interested in art, it would still raise some questions and if you are, you could investigate certain aspects further, choosing the texts in the reader accordingly.

At the Panel Discussion on May 22nd both yourself and the co-founders Răzvan Ion and Eugen Rădescu spoke about the Biennale as an exercise in reaching out to engage the public directly, and there seemed to be a particular emphasis on education. Can you say more about this? What sort of engagement are you hoping to see from the people in Bucharest itself in response to the ideas behind the exhibition and the works on show?

We are trying to promote the idea of research-based education, because the Romanian education system tells students that they have to memorize everything, but it doesn’t tell them what to do with all that information and how or why they should investigate further. Most professors don’t help in developing critical thinking in students and recently the government pushed for a stronger emphasis on religious education.

What other projects do you have ahead of you after the Biennale closes this year? What comes next for you, and perhaps also for the Bucharest Biennale?

I’m working on a few curatorial projects for this fall, but I would also like to concentrate on my artistic practice a bit more, I have a few ideas on paper that I would really like to develop further. As for the biennial, I’m curious, because I’m sure the next edition will be completely different and very interesting.