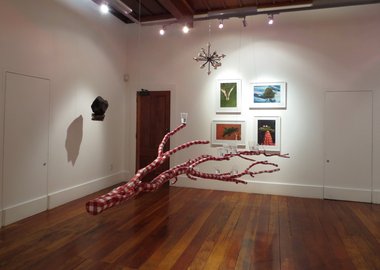 The vanitas heart of the tradition of still life had pretty much ceased to beat by the end of the 18th century, so that from then on the traditional arrangement of objects largely became exercises in composition, or studies of colour-relations. But, devoid of the moral content, most contemporary still lifes are doomed to be polite genuflections to a style rather than potent extensions of a tradition. Gardner's recent work has valiantly re-occupied the latter ground.

The range of art practice seems to be expanding exponentially. Reviews of recent group shows on this site, for example, supply ample and convincing proof of this phenomenon. The separate genres of portraiture, landscape, still life etc codified in the 18th century held sway until Modernism’s last gasps in the early 1980s, and, as well, the disciplines of painting, sculpture, printmaking, ceramics etc remained discrete units until pretty much around the same time.

Since then it’s been cornucopia-meets-Pandora’s-Box, with no sign of - or even wish for - restraint anytime soon. Still, with such “open slather” why worry about the destination when you can enjoy the ride? This is possibly the most stimulating time for art-making since the 1960s, a return of the dominance of material physicality after a few decades of sometimes rather arid theorising, a new playfulness subverting a tired earnestness.

Even so, there are still occasional flashes on art’s radar of indications that the old genres may still have a bit of life in them, albeit with a new spin. There are, of course, plenty of occasions when the radar registers not a flash but a crash, such as the very recent unveiling by Prince William of a portrait of his grandmother commissioned by the New Zealand Portrait Gallery to mark last year’s diamond jubilee of the 1953 coronation. In such instances one can only seize on Mallarme’s remark that the world is rich, not clear.

The genre still providing the richest seam of investigation is probably that of still life. This vanitas tradition has metaphor built into it, whereas genres such as conventional landscape and a portraiture striving for likeness are increasingly prey to a dulling and redundant realism. Still Life Still Lives as an exhibition title in Palmy once had it.
Californian-born artist Andrea Gardner has been living in New Zealand for nearly twenty years, and over that time has developed a complex practice ranging from psychologically disturbing small, brick-coloured, wall-based ceramic figures, sculptures consisting of ordinary white crockery glued together in towers, and, more recently, constructed photographic imagery that picks up the notion of still life, gives it a good shake, then turns it inside out both in terms of the vanitas tradition’s relationship to human life and photography’s relationship with realism.

Her photographs over the past decade have hitched the fated human dimension of the vanitas to the larger scenario of the planet’s fate, not through any austere Greeny finger-wagging, but by rolling out a profusion of historical visual references sited mostly in the late Baroque and high Romantic periods. As Mae West once observed, too much of a good thing can be wonderful. And Gardner’s complex images do make you wonder.

Initially the wonder might be centred on the apparent chaos of her subject matter. There’s an unsorted, box-room quality to it that seems out of place on austere gallery walls. This formalist concern, however, must give way to what these images prophesy so insistently - the global environmental and social implications of the rising, relentless stress of climate change. What the real wonder here is how expertly Gardner’s orchestrated this seeming chaos into an ultimately coherent and convincing vision.

These images are staged more than literally. They have a backdrop, they have actors, they have drama. Gardner selects historical artworks raising nature worship to a very operatic Sublime - the sort of imagery that for most of the 20th century it was fashionable, in the words of Dorothy Parker, not just to be tossed aside lightly but to be hurled with great force. The actors have all been trained at the Vanitas School of the Performing Arts - the dead birds, the bells, books and candles - but since graduation their acts have become somewhat wayward. The elegant dispositions of, say, the Dutch realists, are nowhere to be seen. Gardner’s project sends notions of composition packing. For her, decomposition is more like it. Among the new dead in this scenario are Modernism’s sleek productions glorifying a progress that now foretells doom, not delight. You don’t have to step out to the theatre for this drama. It’s here. Up close and personal.

The vanitas heart of the tradition of still life had pretty much ceased to beat by the end of the 18th century, so that from then on the traditional arrangement of objects largely became exercises in composition, studies of colour-relations and, in the hands of rare masters such as Morandi small miracles of simple paint. But, devoid of the moral content, most contemporary still lifes are doomed to be polite genuflections to a style rather than potent extensions of a tradition. Gardner’s recent work has valiantly re-occupied the latter ground.

As a mixed media artist she’s not too concerned about whether her photographic imagery is “real” photography or not. The purist aims of Edward Weston, Minor White and all the other guys were part of the Modernist project where the givenness of the subject matter was fully embraced, to be neither staged nor cropped, and those artists still identifying principally as photographers tend to retain something of this focus; such opprobrium was attached to any transgressing that “sinning” is not an extreme description of the moral force pertaining.

As Modernism segued into what came after it, the women’s movement of the 1970s was one of the agents propelling change. Even in far-flung New Zealand this showed up in the practice of photography, where emerging practitioners such as Rhondda Bosworth, Jane Zusters and Janet Bayly by-passed the prevailing documentary mode to forge a new style of more personal expressiveness having more to do with truths of subjective experience than the accepted truths of a visual objectivity. Viewed with some alarm at the time by the purists, this new wave liberated the medium and triggered an expansion of photographic concerns that has continued exponentially since, aided by the digital revolution and abetted by such developing technologies as the phone camera. What now may constitute photographic realism is probably an unanswerable question, and even, perhaps, one no longer worth asking.

The four newer photographs in this show, grouped together - Carbonesque, The Lawn Man, The Perfect Lawn and Picnic - do pose a kind of question though. What kind of photograph are they? They differ from the others in that they could be visual records of sculptural installations rather than the stand-alone images the earlier, larger photographs are. It’s a situation making you wonder what Gardner might do next with her ironic picnic.

The two actual sculptural installations part of the show seem to relate more to the earlier work than the more recent. Both of these works are suspended in space, the smaller one - My Mother’s Roses - consists of a large dirt-like lump atop a pile of half a dozen books, hung so close the the wall that its shadow forms an integral part of the image. The larger one - Burning Star - hanging in the centre of the room consists of a star-like object near the ceiling presiding over (parallel with the floor) a large, bare branch covered in a red and white tartan-like bandage, with a dozen plastic “glasses” filled two-thirds with water balancing on crooks of the timber. Bandages imply wounding, the water symbolises basic sustenance and the balancing act suggests an extremely fragile situation where the scales might go either way. The bandaging may resemble the picnic cloth in in the eponymous adjacent image, but what Burning Star powerfully suggests is that time is of the essence and there’s little of it left to spend lounging around on the grass. 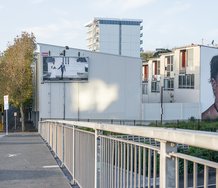 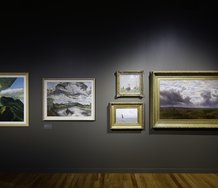 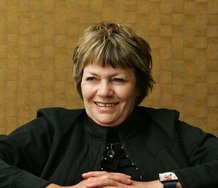 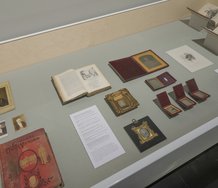