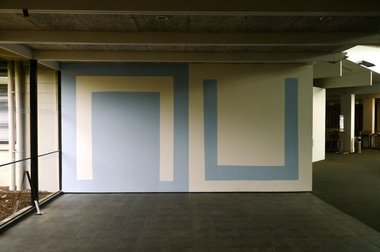 The wall has forced a horizontal-landscape bearing on the artist, which he summarily dealt with by creating a type of diptych in the initial stages. Within this division were placed two simple squared-off ‘n' and ‘u' shapes, making up a mirror-image inverse of each other. They seem to spell out in san-serif French “nu”, as in naked. In many ways it was just that, as it exposed its particular processes and attempted a bare simplicity that hovers between drawing and painting.

Rohan Hartley Mills has spent eight weeks painting, erasing, and re-painting directly onto the Drawing Wall at the entrance of Te Tuhi. His process calls to mind that comment from arts writer Paul Gardner about how “a painting is never finished, it just stops in interesting places”. During the period of 8th March to 4th May Hartley Mills’ painting remained active as a series of unfolding possibilities. Any one viewing existed as only one possibility among many.

It is usual to find a Hartley Mills’ painting on canvas taking up a vertical-portrait orientation, but the wall has forced a horizontal-landscape bearing on the artist, which he summarily dealt with by creating a type of diptych in the initial stages. Within this division were placed two simple squared-off ‘n’ and ‘u’ shapes, making up a mirror-image inverse of each other. They seem to spell out in san-serif French “nu”, as in naked: perhaps a kind of ‘naked’ painting has been underway. In many ways it was just that, as it exposed its particular processes and attempted a bare simplicity that hovers between drawing and painting.

Something is being worked out before our eyes. There seems to be a striving for something: the problem of its own forms at such a scale, perhaps. If it weren’t for the wall’s structural immovability, its size alone would have us remember the post-war American painting that used mural dimensions in opposition to the easel paintings of Europe. But the wall imposes its mural status on the artist matter-of-factly. Its success as a wall painting could be said to invert what the modernist painter Barnett Newman meant as derogatory in his own time, when he claimed that artists might employ the heroic measure of murals, and yet their formal scale may not translate far from what essentially remained an easel painting (1).

While large in size, Hartley Mills’ wall painting has a satisfyingly compact scale. It denies the wall its grand impositions, and refers back to the studio and intimacy of the easel. Hartley Mills work is best with smaller proportions: there is an inherent humility, which even at this size keeps itself in check, preferring a simplicity and spare application. The work is not really bombastic enough for this kind of mural grandstanding and there could be a danger that spare becomes thin, stretched out across such an expanse. Yet the work does maintain its own integrity. Hartley Mills is capable of real presence. His end-of-year Masters show at AUT in 2013 was extremely satisfying to behold, reflected in its near whole sale purchase by the university itself for its own collections. His work tends to be playful, filtered through a Pop Art sensibility, while grounded in a hard-edge and gestural weightiness as drawn from twentieth century abstraction.

This wall painting evolves like a series of dressings and un-dressings. From its bare baby blue beginnings it continues with veils of pink and black, which swap places to become black and pink, revealing their converse underpainting through polka dot cut outs. At some point the work is seemingly crossed out with huge swaths of black. It appears as both a device of negation and revelation, attempting to strike out in some new direction. The figure of an ‘x’ looms before us, and if read in this way could be usefully understood as parallel to the literary device of sous rapture (2). It would make this mark similar to an in-text crossing out as used by philosophers Martin Heidegger and Jacque Derrida to indicate that a signifier is literally ‘under erasure’.

Such marks of annulment strike a philosophical pose, calling attention to a word’s inadequacy in carrying singular meaning, while keeping its ambient intention in place: crossed out but legible, since it none the less remains necessary to reader comprehension (3). ‘Being’ was such a word for Heidegger (4). A word necessarily ‘under erasure’ for its imprecision, yet kept in place and bearing the weight of meaning. As this painting comes into being at its various stages, what has been is being denied, yet kept before us to continue meaning something to the process. The apparent crossing out will now remain in some shape or form throughout the wall painting’s evolution.

With all those lines and dots the work does seem to evoke something of a calligraphic or hieroglyphic sensibility toward signage. In its final stage the painting is almost a pictorial negative of the original positive layers, with previous forms ‘x-rayed’ and re-traced back in. The figure of “nu” is before us once again, only truly undressed and revealing some of those layers beneath. In a large expanse of white, roller marks are left like a sgraffito pulse, and dark shadowy forms loom in its near opacity. In the black space cupped by the ‘u’ form, thickly brushed shapes, which are initially absent from view, come into relief in the light when standing to the side. There are tiny lumpy splodges thickly incrusting the wall - the colour they once held now buried in black. A sense of searching for some understanding is seen in tiny wobbly re-tracings of acid greens and vivid pinks around the edges of stripes or half cupping the circles as if to seek out the mystery of these places.

Looking closer there are areas of roller splatter leaving faint constellations over the blackness at the base of the wall. Along with low-lying drips, all these traces of process connect us to the floor, where incidental coloured marks and rubbings continue - attempts to clean - anchoring the work to a space of operation. This is foyer as studio, and there, as if in explanation, resting in the frame of a window is a stick coloured in multiple stripes. The uneven run of paint at one end indicates its function as stirring stick. It looks like a wand at rest from conjuring, and its coloured stripes seem to be code or notations toward the making of a painting. It rests on a crumpled and used rag, like a limp canvas pathetically held in place. While not quite, the gesture reminds me of both Jim Lambie and André Cadere. Next to this is a roughly cut out wooden circle with an attached block for a handle wrapped in masking tape. It’s a tool made for stencilling around, to create the circles. The sense of transience around these things leaves a feeling that painting could continue at any moment. The wall work along with these well placed tools await the return of the artist.

(1) I’m paraphrasing here from what I remember, listening to him on the Arthouse Films DVD, Painters Painting. This is the original Emile de Antonio documentary made in 1972.

(2) Usually translated as ‘under erasure’, rature in French is a deletion or crossing out. 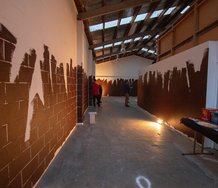 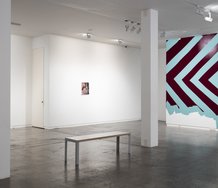 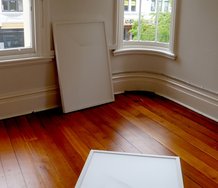 Thinking in the Abstract 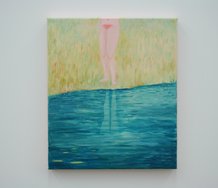