The New Artists and New Academy groups of St Petersburg 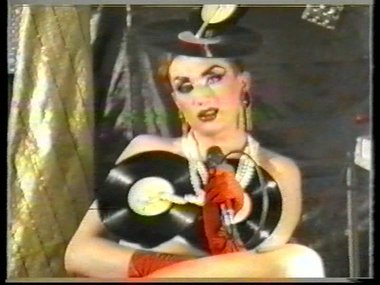 In a short extract in the accompanying exhibition catalogue, curator Ekaterina Andreeva recounts a story where singer Joanna Stingray took works by Novikov and Kotelnikov to the USA, and Andy Warhol responded by sending a copy of his book The Philosophy of Andy Warhol and several autographed cans of Campbell's Soup back to the artists. The book ended up in Novikov's archives; the soup was consumed immediately in honour of the New Artists' benefactor.

The exhibition Club of Friends: Timur Novikov’s New Artists and the New Academy now showing at Calvert 22 in London comes at an interesting political crossroads. On the one hand, it serves as the opening volley in what will be a slew of shows held in the UK and Russia as part of the UK-Russia Year of Culture 2014. This exchange organised by the British Council and the Russian Ministry of Foreign Affairs is set to facilitate one of the largest programmes of cultural projects, exhibitions and performances between the two states to date. At the same time, Russian incursions into Ukrainian territory and the recent annexation of Crimea look set to drag Europe back into a diplomatic (and potentially military) quagmire which some have argued echoes Cold War tensions, and the extent to which the events in Ukraine are being registered in and by the UK shouldn’t be underestimated.

With that being said, Calvert 22’s show responds to the complexity of the current situation with a surprising and illuminating exhibition showcasing a period of contemporary art production which many may find unexpectedly upbeat and challenging, given the political pressures of its time. Beginning around 1982 when Timur Novikov founded the New Artists group in St Petersburg, the show traces the group’s progression as they worked to create ‘something free from formal art education in favour of a more open ended system of self-education, networking and like-minded multi-disciplinary relationships.’ (1)  These sentiments wouldn’t sound out of place in a present day contemporary art collective’s manifesto, and yet the New Artists approach during the stagnant 1980s in the Soviet Union suggests a burgeoning cultural freedom of expression which in reality may not be possible in present-day Russia.

The exhibition then moves to the New Academy group which was founded in 1989 after Novikov had spent time travelling through Europe. These works, which in many ways responded to what he had seen in the West represented a change in thinking, with the artists invoking a return to Greek and Roman classicism, with its notions of ‘the ideal’ and ‘utopia.’ The resulting works from this period include references to dandyism, with Oscar Wilde a prominent influence, and are heavy with visual references to classical settings and mythology. Within these works there is also an exploration of the body and a homoeroticism which may seem startling to some viewers, particularly given the dire (and much publicised) state of LGBTQ rights in Russia currently.

The works at Calvert 22 are spread out across two floors and encompass painting, textile, video, collage, photography and sound. Rather than adhere to a strict chronological installation, the curators have instead mixed the works together, for example juxtaposing Novikov’s incredible textile works with paintings from Oleg Kotelnikov, Vadim Ovchinnikov and Inal Savchenkov among others. It makes for an interesting combination of mediums, but the overall effect suggests a scope which may again prove surprising. The reliance on ‘everyday’ materials and an overarching, almost DIY aesthetic also speaks to an adaptability and resourcefulness which underpinned the theoretical focus of the works on show, hinting at a sort of third position outside of the prescribed political and social doctrine and a straight oppositional tact.

For the most part it is easy to tell which works fit into the New Artists period and those which come from the New Academy. The earlier pieces from the 1980s show an interest in neo-expressionism and contain pop art references which tied the Russian artists to likeminded scenes in parts of West Germany and New York among others. In a short extract in the accompanying exhibition catalogue, curator Ekaterina Andreeva recounts a story where singer Joanna Stingray took works by Novikov and Kotelnikov to the USA, and Andy Warhol responded by sending a copy of his book The Philosophy of Andy Warhol and several autographed cans of Campbell’s Soup back to the artists. The book ended up in Novikov’s archives; the soup was consumed immediately in honour of the New Artists’ benefactor.

Perhaps most enlightening moments are the video works, which touch on new approaches to animation and sound work, as well as being laced with political commentary and critique. The exhibition texts outline the links between the primarily visual arts communities which are on display and their links with bands and sound projects such as the Popular Mechanics orchestra and Viktor Tsoi’s band Kino, whom the New Artists toured America and Europe with in the late 1980s. The political undertones of ‘Pirate Television,’ directed and produced by Novikov with his collaborators between 1989 and 1991 are particularly impactful, covering amongst other topics the dramatic collapse of the Soviet Union and the rivalling bureaucratic bodies which sought to take control of the new Russia. Even in addressing these tumultuous events, the pieces retain the light-hearted irreverence of earlier works.

As an exhibition, many of the works feel like an appetiser to an even larger meal, a fascinating glimpse to what is considered a crucial moment in contemporary Russian art but a less well known or understood series of movements in the West. Archive materials courtesy of the late Novikov’s archives help round the picture and situate the New Artists and New Academy into a wider context, though the show certainly inspires wider reading.