Every Dream Home a Heart-Ache 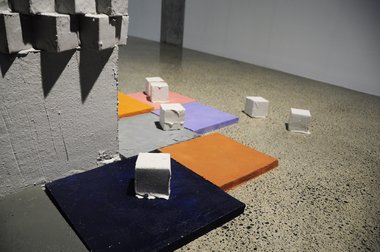 Park's sculpture seems to be not a literal version of her home but more about the mechanics of recall, a comment on stacking or juxtaposing slices of memory, and fashioning them into a semblance of ‘coherent' order. ‘Home‘ as a notion appears to be a bigger trope than just a single dwelling or particular family chemistry - with wall and floor sections extended out, tilted, raised and lowered - a bit like a wonky garden path and a sequential sense of direction.

Charlotte’s Huddleston’s conceptually complex exhibition looks at notions of ‘home’ focussing on memory and two artists’ recollections of childhood living space (Suji Park, Jun Yang), blended with metaphors for the processes of mental capture and domestic bodily transition (Cornelia Parker). Expertly installed in Gallery One, the contributions by each of the three artists are formally and ideationally distinctive.

Cornelia Parker’s work here has been shown before in Two Rooms, and it has another context, being titled Transitional Object II (2008): referring to D.W. Winnicott’s theory of children’s use of soft objects - like blankets - as maternal substitutes. Yet Parker’s camouflage netting from an army tent, as a suspended black grid in the shape of a roof, becomes a trope in this exhibition for a skeletal structure in which to insert real and false piecemeal memories. It takes on another different sort of metaphorical significance separate from the artist’s intention.

Jun Yang presents an (at times) gorgeously colourful film about Taipei at night, depicting life in lonely darkened streets and hotel rooms - as well as dwelling on glowing flashing street signs. In A Short-Story on Forgetting and Remembering he talks of barely knowing his grandparents, and deliberately exaggerating the significance of a gift from his grandfather of a Parker fountain-pen, to create a new history. He speaks of his own parents living entirely in the present, and ignoring the past and future. He also notes that Taipei itself has so little ‘history’ that it even has official archives of boxes of records from the Old (Chinese) Empire (pre-Taiwan) that go back 5,000 years.

Suji Park is exhibiting a lot these days in Auckland. Her work here though, whilst spread around the space, is articulated into three separate clusters that feature ceramic and concrete components - and exploit low key colour. One component is a typical Park ‘anthill’ (textured and spray-coloured, vertical), but the other two accentuate the horizontal, using cast block modules placed on or around coloured slabs. The scattered composition refers to the artist’s memory of her family house in the Buk suburb of Seoul, a place she revisited and found in a state of disrepair. The blocks are modular components which seem to be repeated units akin to the square mesh modules of Cornelia Parker’s camouflage netting, a metaphorical filter that structures or revamps memory.

Park’s sculpture seems to be not a literal version of her home but more about the mechanics of recall, a comment on stacking or juxtaposing slices of memory, and fashioning them into a semblance of ‘coherent’ order. ‘Home‘ as a notion appears to be a bigger trope than just a single dwelling or particular family chemistry - taking on wider cultural allusions - with wall and floor sections extended out, tilted, raised and lowered - a bit like a wonky garden path with crooked paving stones, and a sequential and chronological sense of direction.

Mixed in with this interest in memory for these three artists (and curator) is also a deep understanding of the tactile and tonal properties of the materials used, this helping to provide emotional impact for the viewer, especially salient contrasts such as dark versus light, hard versus soft, horizontal versus vertical, or visual access versus opacity. Such foils draw the disparate peripheral elements in towards the gallery centre, giving the various textural resonances effective spatial and semantic coherence overall.